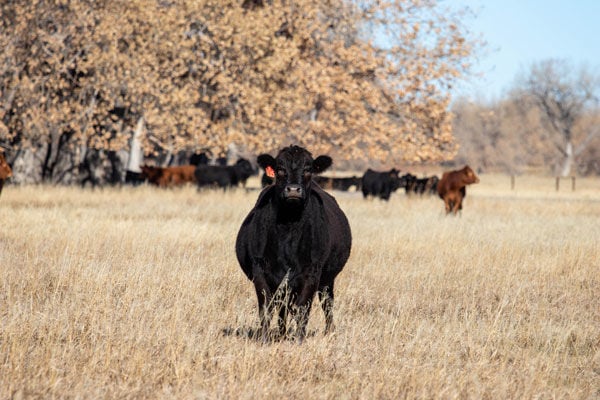 A Limousin mother cow stares at the camera as her herd mates graze behind her. 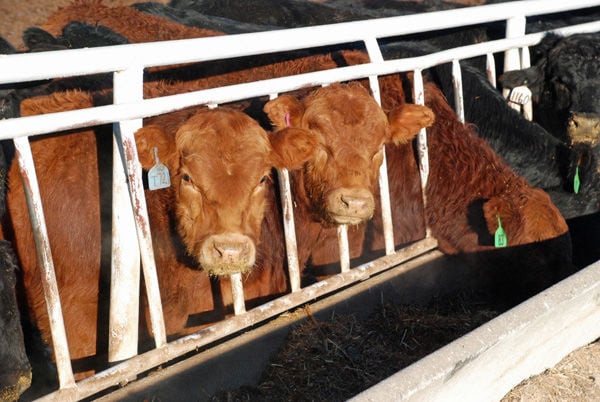 Limousin and Limousin cross calves look up as they feed at the bunk. 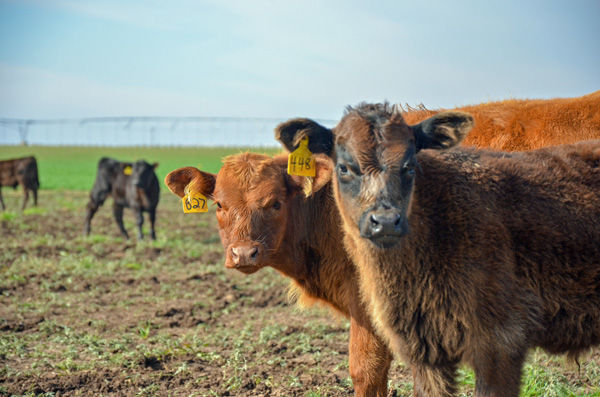 The Limousin breed is often crossed with Angus, to make the Lim-Flex hybrid.

A cowboy trails a bunch of Limousin cattle. The breed is thought to have begun in an area of south central France in the regions of Limousin and Marche. 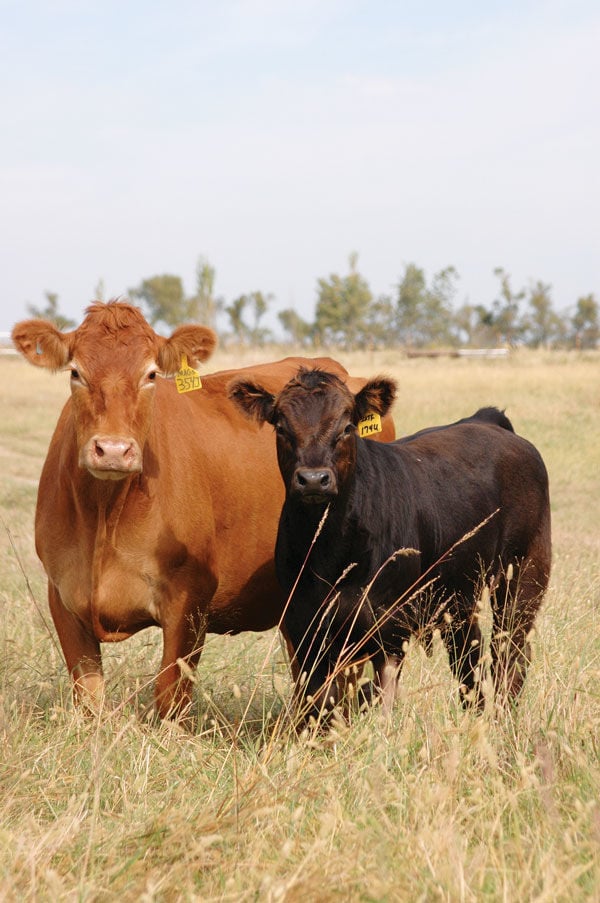 A Limousin cow stands next to her calf.

It’s a good thing the Watts family raises their own beef, because with six kids, there are a lot of mouths to feed.

When Alycia Watts makes supper, it doesn’t take long for her and husband Jamie’s four sons and two daughters to put it away.

“She makes a 9x13 casserole dish,” Jamie said, continuing with a laugh, “and the kids demolish that, and we look at each other and say, ‘what do we have for supper?’”

For the Watts, the beef of choice is the Limousin breed.

Cattle pictured in cave drawings estimated to be 20,000 years old have been found in France, with a striking resemblance to today’s Limousin.

They are native to south-central France, in the regions of Limousin and Marche. With a rugged terrain, rocky soil and a harsh climate, the cattle evolved into a breed of unusual sturdiness and health. Because the region remained somewhat isolated, the cattle also evolved with little genetic interference.

Because of their size and power, they were also used as draught animals, as well as beef cattle, and at the end of their lives were fattened for slaughter. Limousin breeders in France emphasized improving the breed, and the breed made a deep impression in French cattle shows in the 1850s.

Getting the breed to the U.S. took some time. In the middle 1900s, cattle from France were not eligible for importation to the U.S. due to hoof-and-mouth disease. Canada did allow imports from French after a rigorous quarantine. The first Limousin imported to Canada was a bull, named Price Pompadour, in 1968.

It was three years later that the first Limousin bulls imported permanently to the U.S. arrived. The first, named Kansas Colonel, was imported by Bob Haag of Topeka, Kansas. The North American Limousin Foundation had been founded at the Albany Hotel in Denver in 1968.

On the farm near Fairfield, Nebraska, Jamie Watts knows what works. He loves his Limousin. “We like the efficiency of the Limousin cattle,” he said. “They are really efficient when it comes to converting pounds of feed into gain.”

He and his dad, Jim, see it firsthand.

“We can tell it when we feed Limousin cattle along with Angus cattle,” he said. “The Angus seem to take a little bit longer to get fat than the Limousin do.”

Calving ease is not a problem, either.

“They seem to calve good,” Watts said. “We don’t seem to have many problems.”

According to Watts, Limousins have smaller udders and don’t produce an over-abundance of milk for their calves.

“They are not excessive with milk production but they are adequate with the amount of milk they produce,” he added.

Limousin cattle are known for the leanness of their beef, and Watts crosses his Limousin with Angus.

“That’s why the Limousin-Angus cross is so popular,” he said. “You take the best of one, the leanness and the large ribeye and mix that with the marbling and fat that an Angus has, and that’s what you’d call a perfect mix of beef. It gives you the right size of ribeye that the packer likes, the marbling and fat the Angus has, plus the efficiency, and it makes a really nice carcass.”

In France, the breed was known for its strong muscled hindquarters and heavy muscling. As they have spent time in the U.S., those characteristics have changed.

“When cattle came from France in the ‘70s and ‘80s, we called them ‘bubble butt’ because of their huge massive muscles,” Watts said. “As Americans have bred and crossbred them, they’ve bred them to look more and more mainstream.”

The muscling isn’t as definitive, Watts said, but it’s still there.

“In doing that, we’ve created cattle with more depth of rib,” he said. “We’ve sacrificed a bit of muscle on the rear end but replaced it with a deeper rib.”

The animals look less “tubular” than they did when they left France, but there’s also more capacity for carrying calves.

“It’s all around a deeper, more usable structural type,” he added.

Their original color of red with wheat undertones is also not as common. As breeders bred out the heavily muscled hindquarters, they sometimes bred them to be black.

“Cattle that were red-hided weren’t selling as well,” Watts said. “Everybody wanted black. Now that’s turned around to where all good cattle bring in good money.”

The cattle, at first, had a stereotype of being wild. But that’s not true, Watts said.

“Twenty or 30 years ago, they were known as having a bad temperament,” he said. “As a breed, we recognized that was the number one thing we needed to improve. We have made tremendous strides in fixing the docility of the cattle. They’ve come light years compared to other breeds.”

Their calm temperament is something he enjoys about them. He remembers as a kid, shaping heifers with his dad’s help because of their temperament.

“I love seeing the changes we’ve put into this breed,” he said. “I have six kids of my own. To be able to walk out in the pasture with my kids and not worry that one of the cows will take them is exciting to see.”

The Watts sell private treaty bulls, and they like it that customers get a calm animal.

“A lot of our bull customers are older breeders, too,” he said. “I don’t want to sell them a bull that will run them over.”

In 2002, a hybrid Limousin was introduced — the Lim-Flex, a pedigreed Limousin-Angus hybrid. It recognizes the breed complementarity of Limousin and Angus.

Watt’s grandfather James started with the breed in the 1980s when he bought a Limousin bull from a neighbor.

“We liked them,” Jamie said, remembering that his father, Jim, bought Jamie and his brother red Limousin heifers to show. In 1989, with the heifers he and his brother had shown, their registration began, “and we’ve stuck with the breed since then.”

Jamie and his dad, along with Jamie’s wife, Alycia, and Jim’s significant other, Norma Uecker, run a commercial cowherd that is primarily registered and commercial Limousin and Limousin crossed with Angus and Red Angus. They sell private treaty bulls and females, butcher beef, and USDA certified beef, and their kids show at Limousin shows across the nation.

They also represent the breed at the Nebraska State Fair in the Avenue of Breeds.

“We have Limousin cattle on display for the entire state fair,” he said. “It takes some time and effort to do it for the entire 11 days of the fair, but we consider it a good thing. I don’t want our breed to not be represented.

“We take a lot of pride in having our cattle there, and we get a lot of nice compliments out of it.”