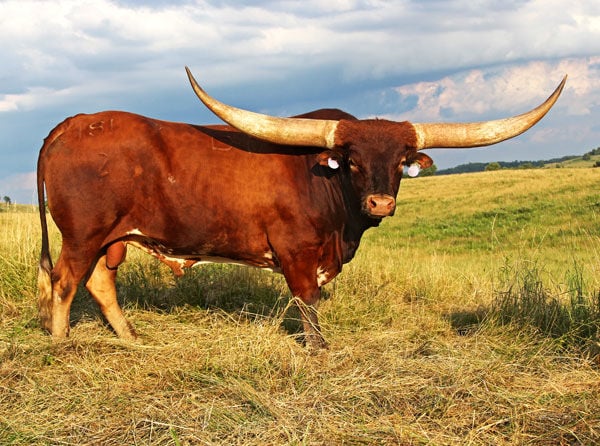 Texas longhorns are prized for their horn size. This bull, owned by Dickinson Cattle Co., has a record horn length. 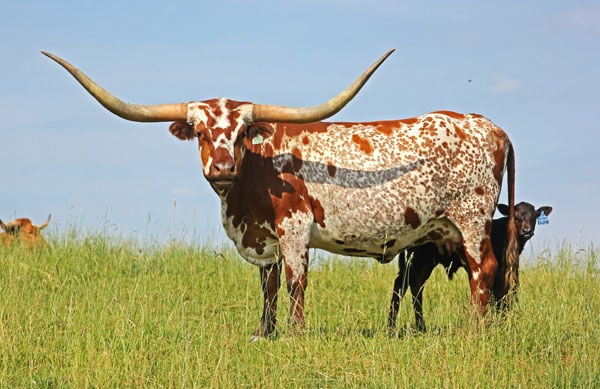 A Texas longhorn cow with her calf. 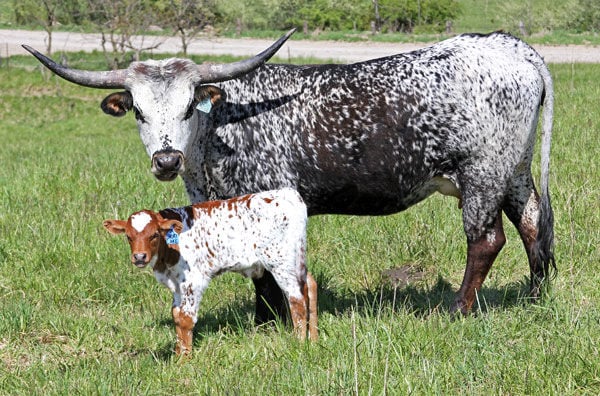 Texas longhorns are known for their vigor, stamina, and resistance to disease. 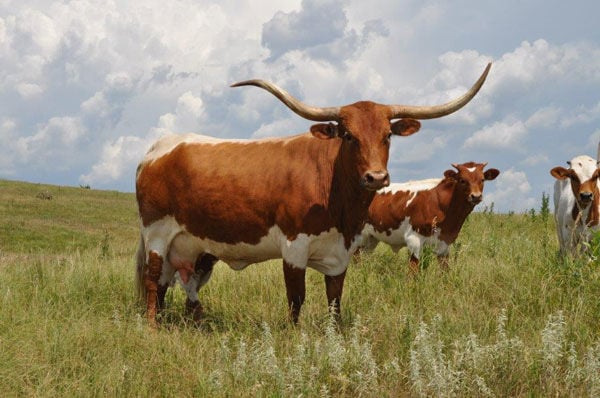 L.D. McIntyre’s herd of 70 Texas longhorns are “addictive and fun,” he said. 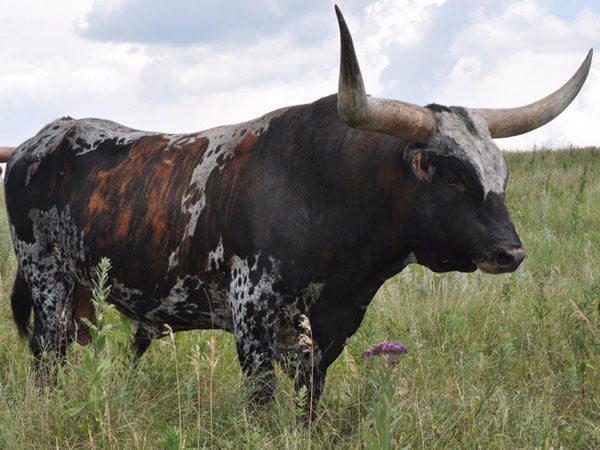 A Texas longhorn bull stands in a Nebraska pasture. The “mongrel” breed began when Christopher Columbus brought boatloads of oxen to the New World in 1493 as a beast of burden.

Texas Longhorns have a long, storied history in the settlement of the West, and are easily recognizable by their long horns that twist upwards on mature animals.

The longhorn is the symbol of the American West, and the oldest one of the few, if not the only, cattle breed to have been developed in the U.S.

A longtime breeder and producer of Texas longhorns, he’s been in the business for 52 years on his ranch, Dickinson Cattle Co., near Barnesville, Ohio.

He raises longhorns and has been selling longhorn beef for 21 years.

The breed is a “mongrel,” Dickinson said, coming from the multiple boatloads of oxen that Christopher Columbus brought to Hispaniola the year after he “discovered” North America.

Cattle back then were used primarily for pulling and milking, not for eating. Columbus’s boatloads of cattle were the “John Deere tractors” of the day, Dickinson said. They were meant to build roads, houses and ditches with oxen labor.

As those cattle spread across the continent, they inter-bred with the oxen brought by immigrants as they traveled west. It is thought that the Texas longhorn is about 80% Spanish origin.

Over the next 500 years, the longhorn was “feral.”

“Draw this picture in your mind,” Dickinson said. “Millions of cattle running wild and nobody’s out there pulling calves or giving them shots. There’s one old cow that never gets sick. She’s highly fertile and never has trouble with a calf, and (over her lifetime) she has 15 or 20 calves that go into the herd.

“There’s another cow that doesn’t have the fertility and the stamina or soundness, and she’s not able to handle the elements. She may only drop a half-dozen of her progeny in the wild herd. Multiply that by 500 years,” he said, “and that’s the most ruthless culling of domestic cattle in the history of the world.”

Their history makes the Texas longhorn a very athletic, strong breed, he said, easy to raise, easy calving and resistant to disease.

Their meat is also low-fat, which appeals to Dickinson’s customers. He puts steers, at 800 pounds, before they go into the feedlot, on pasture.

“We kick the steer calves out in our junkiest pasture, and when they’re up around 850 pounds we put them in the lot,” he said. They’re grain feed there.

When L.D. McIntyre and his wife, Debbie, moved to Wolbach, Nebraska from Texas, they wanted a longhorn on the family ranch, which runs Angus cattle. He started with two heifers but now has 70.

“They are addictive, fun and really, really smart,” McIntyre said.

The taste of their beef is unique, and when customers buy McIntyre’s longhorn beef, he cautions them on its cooking technique. “Low and slow,” is his mantra. Because the meat has very little fat in it, it will burn easily, and when it burns it gets tough.

They’re also easy calvers, McIntyre said. Because their frame and construction is different, they “calve like nothing.”

“I’ve had them calve while they’re eating at the hay ring, standing up,” he said.

Their calves are smaller, averaging 40 pounds at birth. He’s bred his first calf Angus heifers to a longhorn bull, to make for easy calving.

McIntyre is crossing longhorns with Angus for a beef that is grass fed, catering to people who want the health benefits. The McIntyre brand is sold in five grocery stores across Nebraska.

One of the side benefits of longhorns is the desirability of their skulls and horns. The horns are measured in three ways: from tip to tip, the total length of the horns (traveling around its curves), and a composite — which takes the first two measurements plus the base diameter of each horn. The horns can extend over 70 inches from tip to tip for bulls and up to 100 inches for steers and some cows. The record is a steer belonging to Richard Flip, who lives near Fayetteville, Texas. That steer had a total horn length of 129.5 inches.

Horns are important to McIntyre but they are not his end goal.

“I like to have a championship animal but I have to have a butcher animal with it,” he said.

Selling those skulls and horns is a nice benefit to the breed. Steers that are fed out aren’t old enough to have long, twisty horns. But their horns might measure between 40 to 55 inches.

After Dickinson cooks, bleaches and polishes the skulls, they can bring $150 to $200. He hangs some of the skulls on fence posts for nature to wash and bleach. Those skulls — which he said aren’t “house broke” — bring $35.

“The residual opportunities for income behind the piece of meat are a very sweet thing with longhorns,” Dickinson said.

The hides are not used because they can be tanned cheaper in Brazil than in the U.S.

In Dickinson’s shop in Barnesville, over 75 longhorn products are on the shelf, including a canned heat-and-serve roast beef.

Dickinson followed the U.S. Department of Agriculture regulations in labeling dietary facts, and when the beef was analyzed by USDA scientists, they found the meat to be high in omega-3. For those who dislike fish, which is also high in omega-3, Dickinson suggests Texas longhorn beef. The longhorns must be grass fed to have the omega-3 component. The USDA-approved label tested Texas longhorn grass fed beef at 1.45 grams of omega-3 per 3-ounce portion.

Both men appreciate the breed and its distinctiveness.

“They’re survivors,” McIntyre said. “I love them. They have their place. Not everything fits in every box, but they have their own box.”