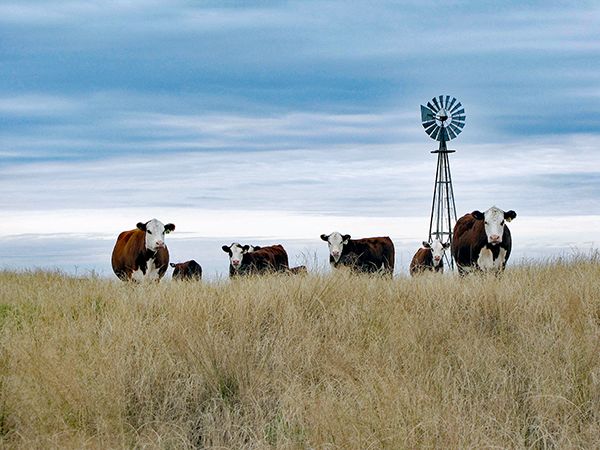 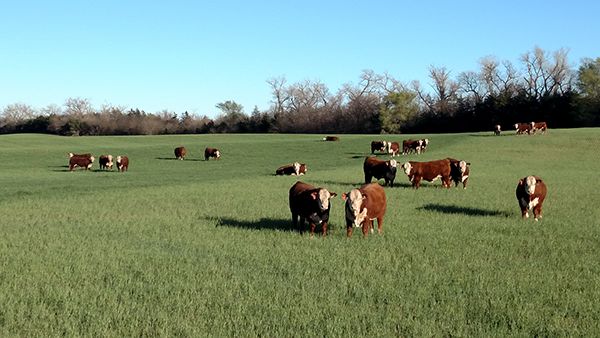 One of the most recognizable breeds of cattle across the United States is the Hereford.

Their red coloring and horns, in the situation of non-polled Herefords, makes them easy to spot when traveling across the nation.

The Hereford breed was first brought to the U.S. in 1817 by Kentuckian Henry Clay, a lawyer and U.S. senator.

Legend says the breed was begun with the draught ox descended from small red cattle of Roman Briton and a large Welsh breed. In 1742, Benjamin Tomkins founded the breed with a bull calf from the cow Silver and two other cows, Pidgeon and Mottle. The breed got its name from the County of Herefordshire, England, where Tomkins lived. His goals for the breed were feeding economy, natural aptitude to grow and gain, hardiness, early maturity and fertility, traits that are still important today.

Herefords three centuries ago were all red with a white switch (tip of the tail). In the 1800s, other cattle, mainly Shorthorns, were bred to Herefords, which varied the color from yellow to gray and light brown, with varying amounts of white. By the end of the 18th century the characteristic white face was well-established, and by the nineteenth century, the red color was set.

Herefords can be found throughout the world: from the U.S. to the United Kingdom, from Europe to Japan, Australia and South America. Even though they originated in cool, moist England, they have been known to thrive in harsher climates.

The Hereford breed is well known for its maternal instinct and docility, and Herefords work well for heterosis: the tendency for a crossbred animal to show qualities superior to those of both parents. Heterosis in cattle breeding works best when the parents are from unrelated lines.

Kevin Schultz, president of the American Hereford Association, explains it with a simple math fact: 1+1 = 3. “If you breed a Hereford to another breed, you get one plus one equals three,” a higher incident for the superior traits to appear.

Schultz is the sixth generation on the family farm, Sandhill Farm, near Haviland, in south central Kansas. The Schultzes sell about 120 Hereford bulls at their spring sale every year, on the fourth Saturday of March. Schultz started the registered Herefords at the farm in the 1980s; prior to that, it was a commercial herd.

Sandhill Farms bulls were sold last season to producers in 16 states and Canada, and the Schultzes also sell five-year-old cows with heifer calves. Schultz believes the fastest way to improve performance traits like calving ease, growth, fertility and carcass traits, is to “turn” the generations faster. “Our program is to keep the heifer calves, use them as the cows, and sell their mothers.”

For Schultz, as for other Hereford breeders, the breed adds value to commercial herds. “There’s a lot of maternal traits that Herefords bring to the table that are necessary for a profitable cowherd. The goal, ultimately, is to help your commercial customers maximize profit. This breed is positioned well to add traits to the commercial herd.”

The American Hereford Cattle Breeders Association was founded in 1883 and operated out of the home of Charles Gudgel in Independence, Mo. The American Royal got its start from the Hereford breed. In 1899, the association hosted the Hereford Association Cattle Show in a tent in the Kansas City stockyard and that show evolved into the Royal.

In 1919, the association headquarters were in an office building in Kansas City. The name was later changed to the American Hereford Association.

Polled Herefords (those without horns) are a hornless variation, with the polled gene, a natural genetic mutation. In 1910, Iowa rancher Warren Gammon started the American Polled Hereford Association and a polled Hereford registry, with 11 naturally polled cattle. In 1995, the two associations merged.

There are about an even number of polled and non-polled Herefords. Cattlemen and women who own Herefords with horns often do so because of tradition.

In 2000, the AHA began whole herd reporting: requiring breeders to submit data for the entire herd, not just the best cattle. That’s an advantage, Schultz said. “It makes us identify the superior outliers in the cattle traits, and it’s a huge advantage for identifying the cattle that have the better traits you’re selecting for.”

The AHA is the second largest cattle registration in the nation, behind the Angus breed. There are about 121,000 Hereford cows on the books for the AHA, and 4,270 members of the association.

The AHA runs the National Junior Hereford Association; there are 3,478 members, all under the age of 21.

The World Hereford Council (www.herefords.com) is headquartered in the United Kingdom. It has 17 member countries (including Kazakhstan, Norway, and Sweden) with 20 Hereford societies.

120,000 registered; unknown how many in commercial herds

bald (white) face; red body; sometimes white flanks and markings below the knees and hocks. In the case of non-polled Herefords, horns.