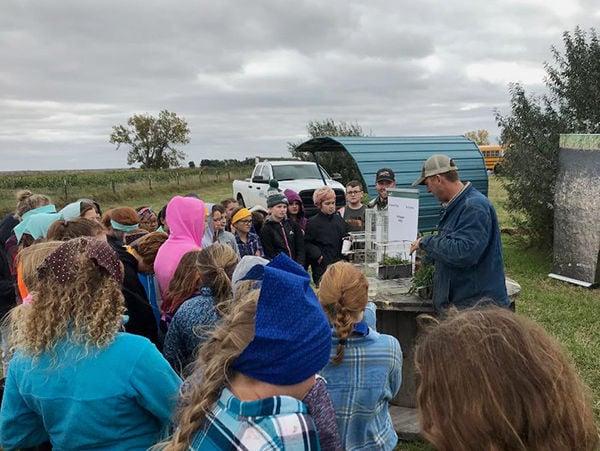 Crop watcher Shawn Freeland hosted several field trips from surrounding schools at his Caputa, South Dakota ranch to discuss the importance of soil health and agriculture as a whole.

Crop watcher Shawn Freeland hosted several field trips from surrounding schools at his Caputa, South Dakota ranch to discuss the importance of soil health and agriculture as a whole.

CAPUTA, S.D. – An unfortunate cold snap has back Shawn Freeland and his western South Dakota operation over the last few weeks, but that hasn’t stopped his passion for teaching.

The Freelands hosted several field trips so students and their chaperones can learn the value of agriculture and soil health.

“Despite the weather, the field trips during the week have been a blessing,” said Kristy Freeland, who filled in for her husband while he was away Oct. 7.

Since their last report, the Freelands recorded roughly 1.3 inches of rain on their ranch. Unfortunately, with the cool rain came frost events since early October. Over the last five days, beginning Oct. 3, they’ve had temperatures hovering around the mid-20s each morning.

“This has set back the pumpkins substantially,” Freeland said.

On the plus side, their first-of-its-kind cover crop maze has held up very well in the weather, but with cool, rainy days, maze goers have been kept away from the farm.

Their neighbors have kept busing weaning calves and giving fall shots. Freeland said the corn in the area looks fantastic but remained just a tad too wet to be harvested as of this first week of October.

The Freelands were preparing for an early October snow storm by checking up on access points and their cattle as they had into the first snow of the very young season.

“We are expecting some bitterly cold weather with snow so we have been out double-checking the condition of our cattle and confirming their access to protection,” Freeland said.