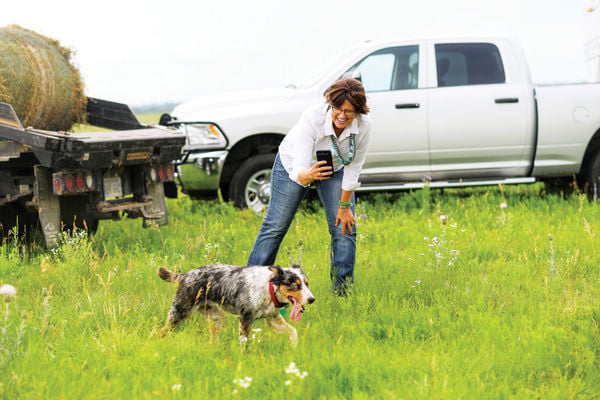 The Certified Angus Beef brand has been bringing consumers to the farm, virtually, since March. The Facebook live effort began with Debbie Lyons-Blythe on her Kansas ranch.

A screenshot from a virtual “field trip to the farm” event hosted by Certified Angus Beef. Caroline Sankey, 3, showed off her new calf in March as thousands tuned in to her family’s Economy, Indiana, farm.

The Certified Angus Beef brand has been bringing consumers to the farm, virtually, since March. The Facebook live effort began with Debbie Lyons-Blythe on her Kansas ranch.

A screenshot from a virtual “field trip to the farm” event hosted by Certified Angus Beef. Caroline Sankey, 3, showed off her new calf in March as thousands tuned in to her family’s Economy, Indiana, farm.

A world where families stayed home allowed them a chance to connect with rural families in a new way.

Sports tournaments canceled. Practices and recitals, even school itself – all put on hold as COVID-19 caused a shift in schedules, and subsequent media consumption.

Thousands of people watched online as a sloth slept at a metropolitan zoo. A children’s book artist brought people into his home studio, virtually, to doodle with him during lunch.

That sparked an idea.

“How do we bring a ranch to people?”

When Margaret Coleman, Certified Angus Beef brand digital director, asked her team, they soon partnered with cattlemen to make it happen. In the last days of winter, CAB handed over the keys to its social media account to a handful of Angus breeders, while consumers across the country asked everything from what the cows eat to the role of the ranch dog.

As of mid-May, 10 families had hosted “Field trips to the farm” in a Facebook Live format, reaching more than 130,000 viewers.

“It was just sharing an experience and sharing a lifestyle, with a little bit of education about what happens on the farm,” Coleman said.

When Caroline Sankey visits her barn, the 3-year-old rarely has a big audience. But one sunny day in March, thousands tuned in to her family’s Economy, Indiana, farm and saw her favorite part of the business.

“We have newborn baby calf,” she said with a smile.

From Kansas to Georgia and South Dakota to South Carolina, followers got a snapshot of what it’s like to raise cattle in all different environments. Sometimes it was blue skies and cotton candy clouds, and others carried gray, overcast tones with wind – lots and lots of wind.

“It was just real life on the ranch,” Coleman said. “We’ve tried really hard to be authentic and relevant during this time.”

Regardless of where the field trips took followers, the goal was the same.

The leading branded beef team wanted consumers to see that its producers are people, too.

“Today’s situation has really brought a heightened awareness to our food supply,” said Nicole Erceg, CAB assistant director of communications. “Consumers are asking more questions than ever before about where their food comes from, but study after study shows people trust farmers and ranchers.”

When they’re unsure, connecting with a human is reassuring. Talking through everything from feeding to breeding was really a backdrop to talking about all the people it takes to get beef to their tables, Erceg said.

Lydia Yon’s granddaughters called the cows while she told the story of how it all started.

“We moved to Ridge Spring, South Carolina in 1996, and at that time we had 100 cows and three children under the age of five,” she said. More than two decades later, “It’s pretty fun to do this as a family. We all have our own independent jobs, but we are still together every day.”

The cattlemen showed their favorite animals and talked about both the best and the worst parts of agricultural careers.

Several showed appreciation for all those essential workers involved in getting the beef they produce to consumers.

“We have a safe, secure and abundant food system, and we want to thank everyone….from those like us on the farm to the truckers on the road bringing that, and the friends there in the supermarkets who are bringing that to us every day,” said Julie McPeake, of CAM Ranches in Arnoldsville, Georgia.

The mom of two young kids identified with schedule changes and the new work-from-home scenario, but appreciated the chance to connect with consumers on a larger platform.

“While COVID-19 has thrown us a loop, I hope some of these opportunities stay with us,” she said.