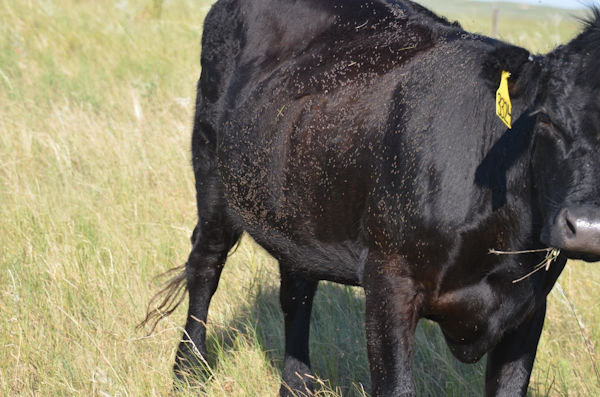 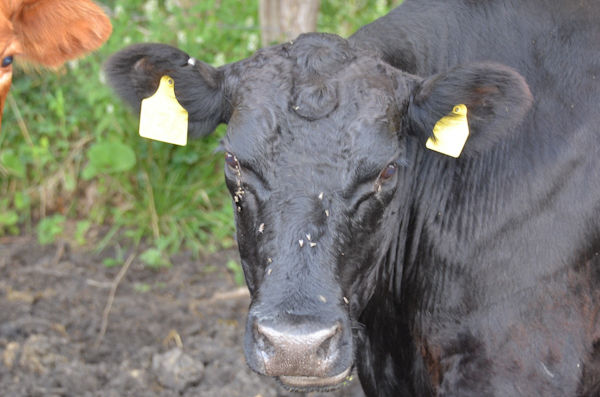 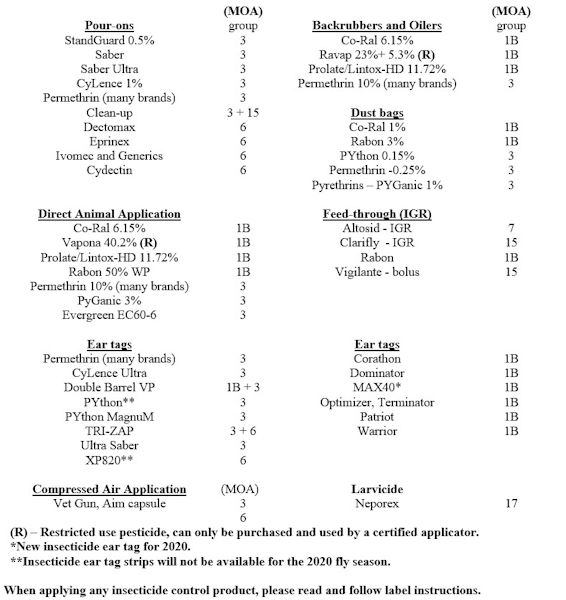 As livestock producers prepare for another grazing season, thoughts are often directed towards grass conditions, animal conditioning, and fence repair. An additional very important consideration should include what type of flies will impact their pastured cattle, and what method of fly control will work best for their management system. Livestock fly control should be viewed as having a positive economic impact on livestock operations. In Nebraska and elsewhere, there are three fly species that economically impact pastured cattle; horn fly, face fly and stable fly.

The horn fly is a small blood feeding fly found on the shoulders, back and belly region of cattle. They take some 24 to 38 blood meals per day. Females deposit eggs in fresh cow manure where the complete life cycle, egg to adult, can be completed in 10 to 20 days during warm conditions. In Nebraska, there are multiple generations during the fly season which can lead to extremely high fly numbers (Fig. 1) in late August and early September.

The horn fly is considered one of the most important blood feeding pests of pastured cattle in the United States. The annual economic losses caused by this fly has been estimated at $1 billion in the U.S. When horn fly numbers are high, cattle experience annoyance and blood loss. The effect may be decreased milk production, reduced weight gains, changes in grazing patterns and bunching of animals. Research studies have demonstrated calf weaning weights are negatively impacted from 4 to 15%, and stocker cattle and replacement heifers experience up to 18% impact in weight gains. In addition, horn flies can spread summer mastitis.

The economic injury level (EIL) for horn flies is 200 flies per animal. This level of infestation is often reached in late May or early June in Nebraska. Monitoring horn fly numbers on cattle is important in making appropriate management decisions. Cattle should be monitored weekly for horn flies throughout the fly season. These observations are best taken between the hours of 8-11:30 a.m. when flies are generally located on the shoulders, topline and sides of animals. Observations made later in the day are less accurate because horn flies will generally move to the belly area where it is cooler, making it more difficult to accurately assess population numbers.

Insecticide control methods available to manage horn flies on cattle are many; backrubbers (oilers), dust bags, insecticide ear tags, pour-ons, oral larvicides (IGR’s), low pressure sprayers, mist blower sprayers and the VetGun. Backrubbers (oilers) and dust bags can be an effective way to reduce horn fly numbers if cattle are forced to use them; if used in a free-choice arrangement expect between 35-50 percent less control. Insecticide ear tags are a convenient method of horn fly control if applied at the correct time frame. In Nebraska, ear tags should be applied during the last week of May or the first week in June to achieve maximum control through the fly season. Ear tags applied too early may decline in efficacy while fly numbers are still high and result in economic loss. In addition, adult animals should receive two tags. Just tagging the calf and not the mother cow will not provide the desired level of horn fly control. Animal sprays, mist blower applications, and pour-on products will provide 7-21 days of control and will need to be re-applied through-out the fly season. Oral larvicides (IGR’s) prevent fly larvae in manure pats from developing into adults. An important factor when using an oral larvicide is ensuring steady consumption. An additional complicating issue when using an oral larvicide is horn fly migration from neighboring untreated herds which can mask the effectiveness of an oral larvicide (IGR). The Vet Gun™ applies an individual capsule of insecticide to an animal using a device similar to a paint ball gun and can provide horn fly control between 21 and 35 days.

The face fly is a robust fly that externally resembles the house fly. It is a nonbiting fly that feeds on animal secretions, nectar, and dung liquids. Adult female face flies usually cluster around the animals’ eyes, mouth, and muzzle causing significant irritation. They also congregate around wounds caused my mechanical damage or other injury to feed on blood and other fluids. Since face flies are on the animals for only short time periods, they are difficult to control. Most of the time they are found in shaded areas resting on plants, fence posts and other objects.

In addition to being annoying to cattle, face flies mechanically vector Moraxella bovis, the principal causal agent of bovine pinkeye or infectious bovine keratoconjunctivitis. Pinkeye is a highly contagious inflammation of the cornea and conjunctiva of eyes. If coupled with the infectious rhinotracheitis (IBR) virus, M. bovis can cause a much more severe inflammatory condition. Reducing face fly numbers is a key to reducing pinkeye problems. Fly control methods should target the region of the face with daily exposures of the control product. Both cows and calves must be treated if control is to be realized. Commercial and autogenous pinkeye vaccines are available. Please check with your veterinarian about the use of these products in your area.

The best method of reducing face fly numbers is using a treatment where animals come in contact with an insecticide on a daily basis such as a dust bag, oiler, spray or an insecticide impregnated ear tag. Ear tags should be applied at the label recommended rate. Both cows and calves must be treated if control is to be achieved.

Stable flies are a significant pest of cattle on pastures in the Midwest. Stable flies are blood feeding flies, mainly feeding on the legs of cattle. To avoid being bitten, animals stomp their feet and switch their tails. Other avoidance behaviors include standing in water, lying with legs tucked underneath, and bunching at the corners of pastures.

The stable fly is about the size of a house fly but is dark gray and has dark irregular spots on its abdomen. The proboscis (mouthpart) protrudes bayonet-like in front of the head. Stable flies develop in spoiled or fermenting organic matter mixed with animal manure, moisture, and dirt. The most common developing sites are in feedlots or dairy lots, usually around feed bunks, along the edges of feeding aprons, under fences and along stacks of hay, alfalfa, and straw. Grass clippings and poorly managed compost piles also may be stable fly breeding areas. Winter hay feeding sites where hay rings are used can often be a source for stable fly development through the summer if the proper amount of moisture is present. Stable flies found on many Nebraska pastured cattle likely migrated from distant developing sites. Research has shown stable flies can move at least 10 miles or more.

The effect of stable flies on weight gain performance of pastured cattle is similar to that of livestock in confined operations. Research conducted at the University of Nebraska, West Central Research & Extension Center recorded a reduction in average daily gain of 0.44 lb. per head per day in 84-day trials with animals that did not receive an insecticide treatment compared to cattle that received an insecticide application. The economic threshold of five flies per leg is easily exceeded in Nebraska pasture conditions.

The best adult management option available for reducing stable flies on range cattle is animal sprays. Sprays can be applied using a low-pressure sprayer or a mist blower sprayer. Weekly applications of control products will be required to achieve a reduction in fly numbers. Sanitation or clean-up of wasted feed at winter feeding sites may reduce localized fly development. If sanitation is not possible, these sites may be treated with a larvicide (Neporex), but the application of either procedure may not totally reduce the economic impact of stable fly feeding.

Insecticides have been placed into numbered Insecticide Mode of Action groups (MOA) based on how they work against insects. Continual use of products from a single group against a pest species can lead to reduced control (resistance to all products in the group). To reduce control failures due to insecticide resistance, do not apply insecticides within the same group number repeatedly. Rotate between (MOA) groups during the fly season. A list of different delivery methods, labeled insecticides, and their mode of action for pasture fly control are found in the table below.