Because of the rich yellow color of their milk, the Guernsey breed is sometimes nicknamed the “Golden Guernsey.”

Although decreasing in numbers, the breed is known for its docility and high butterfat and protein content.

Tradition says that the breed originated on the Isle of Guernsey, in the English Channel off the coast of France. In the late 900s, Robert, Duke of Normandy, sent a group of militant monks to the island to educate the natives in farming and to defend the island. The monks brought the best French cattle – Norman brindles, known as Alderneys, and the Froment du Leon breed of dairy cattle from Brittany. From these two breeds, the Guernsey appeared.

The Guernsey breed was first recorded as a separate breed around 1700, with imports of foreign cattle into Guernsey forbidden by law in the late 18th century, to maintain the purity of the breed.

Craig and Gladie Church of Cresco in northeastern Iowa, have been in the dairy business for years, raising Guernseys. The high butterfat and protein content of the milk makes up for the lower volume that Guernseys produce.

“Holsteins out-produce Guernseys,” Craig Church said, “But when you start to factor in the solids in the milk, they are still quite competitive. The components of their milk bring the price up enough so that Guernseys are comparable.”

The higher butterfat and protein makes for better butter and cheese.

“It’s thicker and creamier with not as much fluid waste,” Konecky said.

The color, caused by beta carotene, is also distinctive. Konecky describes it as “glowy.”

The breed is more efficient in feed conversion, too, consuming 20-30% less feed per pound of milk produced, compared to larger dairy breeds. On Konecky’s Beauty View Farm, their cows range from 1,200 to 1,400 pounds at maturity.

Guernseys are more likely to produce A2A2 milk, as well. For people who have trouble digesting dairy products but who aren’t necessarily lactose intolerant, A2A2 milk is more easily tolerated. Guernseys have the highest percentage of cows that are A2A2, Church said, with around 80% of the breed producing the more easily digested milk. (Cows can also produce milk with A1 proteins, which can be harder for some people to digest.)

Most Guernsey bulls being used for breeding are A2A2, Church said. “There are very few A1 bulls.”

Because of their chance of giving A2A2 milk, and for the richness of their milk, people who want a “house cow” often choose a Guernsey. Often those who milk a cow for their own use milk it just once a day, which is fine, Church said. “There’s no right way or wrong way to dairy. Everybody does it different, and cows will adjust.”

Konecky fields questions from people wanting to milk cows for their own use, and makes sure that they realize that dairy cows in general need company.

“I ask them, ‘do you have other animals there?’ Because they are herd animals and they don’t want to be by themselves,” she said.

Guernseys are known for their even temperament.

“They are super docile and super friendly,” Konecky said. “They’ll walk up to you and lick you and let you pet them. If they get out, they’re not going to go too far. They stay close.”

She helps area kids show Guernsey cattle at the county and state fairs.

“They are great with kids,” she said, adding that while beef cattle often requires an adult’s help, the gentle Guernsey does not. “For the most part, they are a project they can do by themselves. That’s the goal, that kids do it by themselves. It’s awesome from that perspective.”

The breed is more heat tolerant than Holsteins, she added, because of their color, which is yellow and reddish-brown with white patches.

Both Church and Konecky agree that Guernseys don’t breed back well.

“They’re just not as reproductively sound as you’d like them to be,” Konecky said.

Their reproductive tract is physiologically deeper than other beef breeds, Church said, although he’s not sure that’s the reason they are difficult to breed.

Church and his wife are retiring, passing the business down to their son, Nate, and his wife, Naomi. At one time, they milked 120 cows. Now they are at 80. They also raise hay and corn.

Church is in his second term as a director for the American Guernsey Association board. In 2018, when Iowa hosted the national convention, the Church dairy was one of the tour stops. Gladie was chair of the hospitality committee. Craig is also active in the state association.

Beauty View Farms, the home of the Konecky’s Guernseys, is home to 18 cows. At one time, the herd consisted of 90 cows. She, alongside her parents, Tom Jr., and Sharon and brother, Vince, also raise row crops, alfalfa, and have a small beef cow herd. Her grandfather, Tom Sr., was very active in the national association. 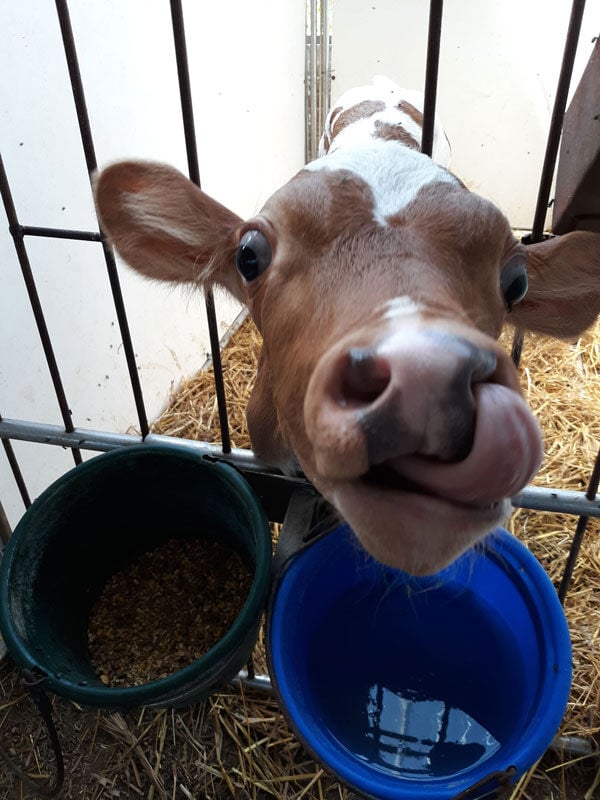 A googley-eyed Guernsey makes sure her nose is clean after she’s had breakfast. 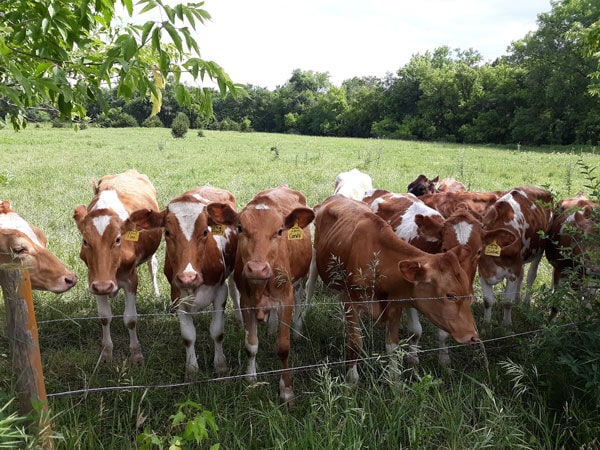 Curious Guernsey calves stare at the camera, on their side of the fence. 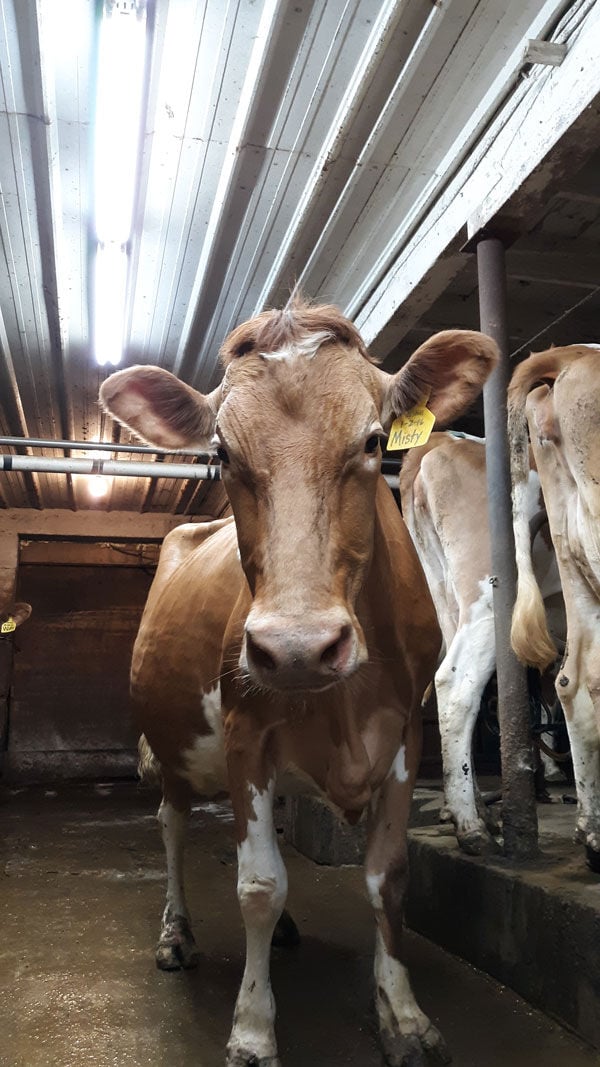 The Guernsey breed is known for the high butterfat and protein content of its milk, increasing premiums for dairy men and women. 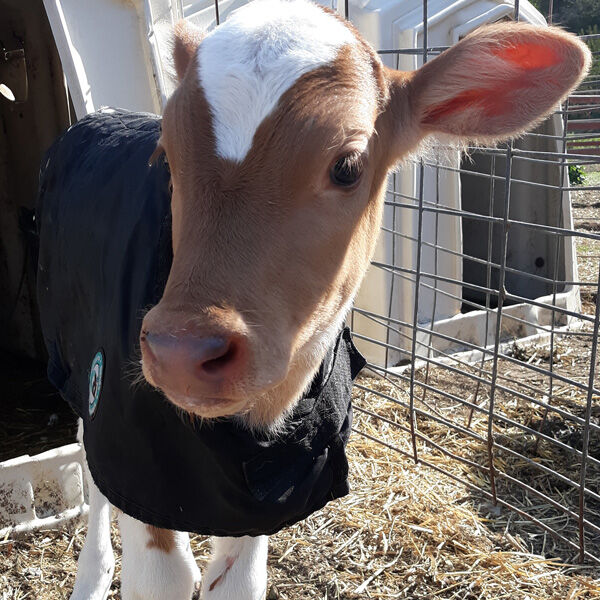 Guernseys are heat tolerant, in part due to their coloring: reddish-brown to yellow, with white patches. 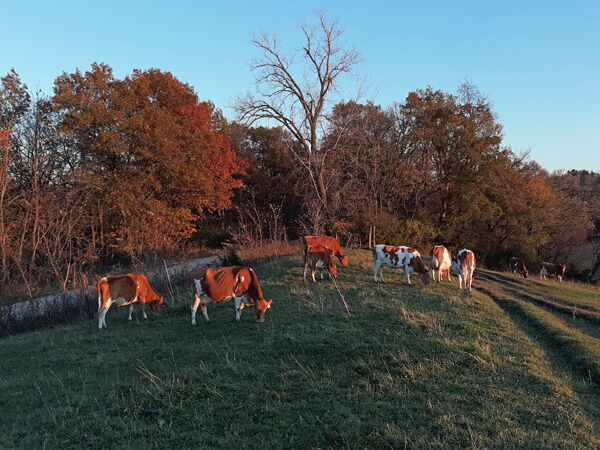 Guernsey cows graze on the Church dairy near Cresco, Iowa.