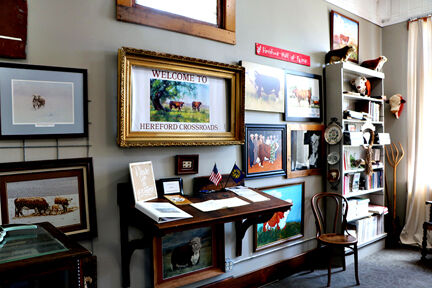 Nebraska is cattle country, and one piece of that heritage will be honored this fall in Northwest Nebraska, when Hereford Crossroads #6 makes its way to Crawford in honor of the 100th anniversary of the Crawford Hereford Breeders Association.

The Hereford Crossroads reunion will take place Oct. 10 at the Crawford Community Building, the sixth such event organized by Nebraskans for Hereford Heritage since the group’s inception in 2015. Former Crawford Hereford Breeders members will have memorabilia on display when the doors open for the 5 p.m. social hour. Other events that night include a meal at 6 p.m. and the annual Hereford Hall of Fame induction and special entertainment at 7 p.m. Typically, two Nebraska Hereford breeders and one Hereford bull are inducted into the Hall of Fame each year.

The Crawford Hereford Breeders Association was formed in 1920, with Clyde Buffington and Sam Swinbank leading the effort, said member and former sale manager Tom Lemmon. Both men were holding private bull sales but were interested in forming a regional association that could draw additional consigners.

Eleven breeders were involved with the organization when the first sale was held in March 1920, though not all of them consigned bulls that inaugural year. Without a sale barn, the association held its initial sale at the Crawford City Park, and early sales often took place in livery stables, according to a 1970 story in Nebraska Cattleman.

“They used hay bales for seats. It was a little bit western. They had some good saddlehorses to lead the bulls in and out,” Lemmon said.

As membership grew, the association built a barn in 1941 and added a sale pavilion in 1945, Lemmon said. The association held an organizational meeting in December or January to consign bulls, and had its annual meeting prior to its sale in March. By 1945, the association was also hosting Hereford shows.

The final show and sale for the Crawford Hereford Breeders Association took place in 1995, but the group boasted 150 members in those 75 years. Membership drew heavily from the Northwest Nebraska region, but also from breeders as far away as Mullen, Lewellen, Bridgeport, Morrill and Henry, as well Edgemont, Hot Springs and Oelrichs, South Dakota.

From its earliest days, the association also supported local youth, starting a 4-H Calf Club in 1921, allowing youngsters to choose calves from the members' herds and sell them in the association sale. Lemmon’s father, Cal, was one of the boys who drew lots for calves in 1921. He and fellow club members Beth Riggs, Gilbert Swinbank, Jim Buffington and Lawrence Tollman staged an all-Hereford show for President Calvin Coolidge during his 1927 visit to Ardmore, South Dakota, with the assistance of the association, according to a Sept. 4, 1947 issue of The Panhandle Digest.

Hereford cattle were introduced to the U.S. by Kentucky statesman Henry Clay in 1817, though he crossed his with shorthorn cattle to avoid inbreeding, according to the Texas State Historical Association. The first breeding herd was introduced in New York by William Sotham. The American Hereford Cattle Breeders Association (later known as the American Hereford Association), was organized in 1881 and established its permanent headquarters in Missouri in 1920.

The Nebraskans for Hereford Heritage want to continue the tradition of preserving information about the Nebraska Hereford industry. The brainchild of Richard Brown of Lincoln, it was organized in 2015 with the goal of creating a Hereford museum.

“It is our long-term goal to have our own museum somewhere in the Sandhills, ideally in central Nebraska,” said Linda Teahon, one of the founding board members.  At the end of the first meeting, the breeders at the meeting each contributed $100 toward the effort and began working on fundraising ideas. Hereford Crossroads, an annual reunion of Hereford breeders, was the result. The reunions take place each October, at various locations around the state. All former members of the Crawford Hereford Breeders Association, Nebraskans for Hereford Heritage members, 4-H and FFA members and other interested parties are invited to the Hereford Crossroads #6 next month.

While they work toward their goal of establishing a Hereford museum, Nebraskans for Hereford Heritage has curated an extensive collection of paintings, sculptures, bull sale catalogs and American Herd Bull editions dating back to 1926. A rotating exhibit culled from that collection is on display at the Sandhills Heritage Museum in Dunning, which opened in 2017.

“Our collection of information is very valuable to the Hereford industry,” Teahon said. “We change (the exhibit) out regularly with artwork. We have to continue to promote our Nebraska beef, and that’s one thing we’re trying to do.”

Artist Brandon Bailey’s “Under the Shade Tree” is one of the premier pieces in the collection and has become the official “flag” of the Hereford Crossroads events. It is displayed at each reunion and on special occasions at the museum in Dunning. Teahon’s photo of the bulls along Goose Creek on the Benj Fink ranch near Elsmere inspired Bailey’s oil painting, which was auctioned off at the Old West Trail Rodeo fundraiser several years ago. Teahon won the bidding that night and has loaned the painting to the collection.

The group also has commissioned four pieces of artwork commemorating the role of landmark bulls in Nebraska’s Hereford history and also aided with the restoration and display of a metal sculpture of Golden Design 14, a noted herd sire owned by Warner Herefords of Waverly. The sculpture was commissioned by breeder Charlie Warner to honor his prized 1968 bull. When artist Arlo Bray completed the piece, it was 32 inches tall, 56 inches long and weighed 120 pounds. Nebraskans for Hereford Heritage has helped the piece be displayed in more than 40 communities. The Golden Design 14 sculpture is currently on display at the Mari Sandoz High Plains Heritage Museum in Chadron, where it will remain until Oct. 8, when it will be relocated to Crawford for the Hereford Crossroads reunion.

Tickets to Hereford Crossroads #6 are $30 each and can be reserved by mailing payment to Dixie Hoffman at PO Box 192, Thedford, NE, 69166 by Oct. 1. There will be no ticket sales at the door this year due to the pandemic.