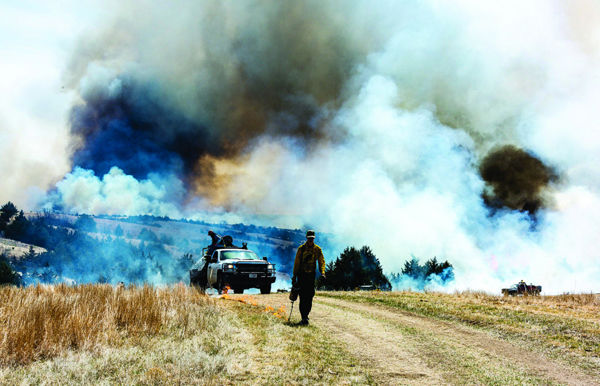 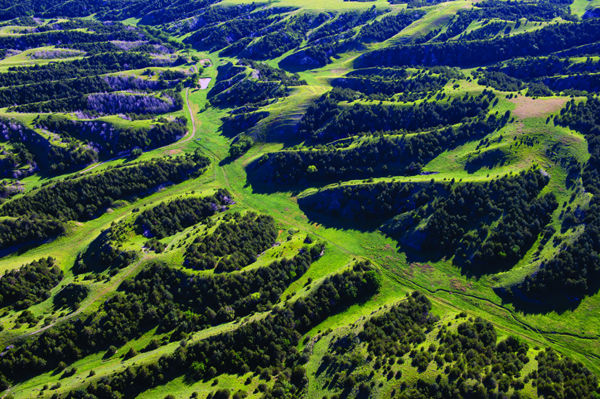 An aerial photo shows the encroachment of eastern red cedar trees into the pastures and grasslands of the Loess Canyons in Lincoln County. 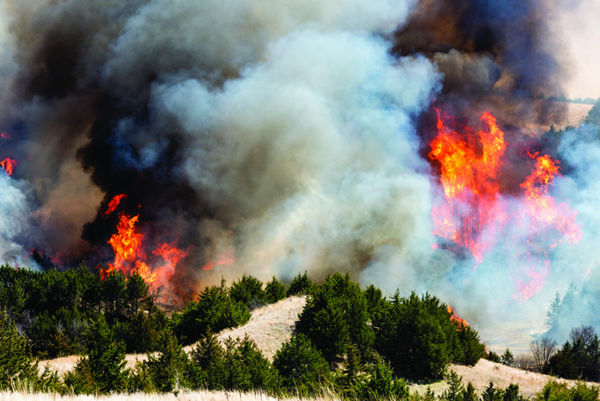 Fire clears out eastern red cedar trees during a 3,000-acre prescribed burn in the Loess Canyons.

Mark Alberts’ dad could recall going out with his grade-school teacher to cut down a cedar Christmas tree, and they had to hunt to find one.

While once looked upon favorably, the hardy, drought-tolerant invasive species is now recognized for its harmful effects on the Great Plains, including increased wildfire risk, diminished wildlife habitat, reduced streamflow and rapid spread. The Loess Canyons is one of the most infested areas in Nebraska, according to experts, with tree coverage of more than 75% in some areas.

The tree is well adapted to the area’s fertile soils and crowds quickly into valuable grazing pastures. Studies show that in areas where grasslands have converted to a cedar woodland, livestock production decreases by 75%.

For the landowners in the Loess Canyons, the situation became clear. Doing nothing and lose the ability ranch in the area, said Scott Stout, a landowner and cattle producer, or do something.

After identifying prescribed fire as the best way to beat back the invasive eastern red cedar, they created two prescribed burn associations to conduct burns on each other’s properties. Each association has close to 60 paying members, and the larger of the two groups, the Loess Canyons Rangeland Alliance, has burned more than 85,000 acres since 2002.

Researchers at the University of Nebraska-Lincoln have taken notice.

“This is one of the few examples where we’ve seen a community come together to confront this issue head-on,” said Dillon Fogarty, a doctoral student researching eastern red cedar at the university. They’re also the only group in the Great Plains that has successfully halted the tree’s spread in a hard-hit region, he said.

Prescribed fire wasn’t the first solution landowners turned to, though. They first used mechanical methods to cut trees back, said rancher Tell Deatrich, but the trees came back quickly and in greater numbers than before.

They then turned to prescribed fire, pooling their resources together in what has turned out to be an effective management technique and a cost-efficient one. Fire, Fogarty said, can stop an invasion before it becomes a problem, but also can restore the landscape after cedars establish.

“If you look around at a burn, you will see half a million (dollars) in equipment and labor being shared,” Deatrich said, so while burn prep can be expensive, the actual burn is cheap.

To participate, association members are asked only to do mandatory prep work on their property before a burn, provide lunch and water for the workers, and help at other burns.

“I help you, you help me, we both go help somebody else,” Alberts said. “That’s just the way it works.”

Through it all, safety remains paramount. “We’re all volunteers, we all have families, we all have operations at home,” Stout said. “Being able to go to a burn, do this burn safely, and then go home to our families is the utmost priority on all of our burns.”

Their efforts have paid off: Neither prescribed burn association has experienced any fire-related injuries.

While they initially encountered skepticism from other landowners and the public, the groups now have the local community’s support and both associations continually gain new members.

“Being successful has been, I think, the key to getting new members – people noticing what’s going on,” Deatrich said. The landowners themselves have noticed healthier grass, improved soil health, increased wildlife habitat, and a rejuvenated water cycle – natural side effects of reintroducing fire to the landscape, he said.

Asked what landowners in other parts of the state should know, Alberts said, “The cedars are coming. Take care of them now while they’re small.” He advised talking to local Natural Resources Conservation Service office, as well as to landowners who have managed red cedar.

“The best time to control cedars was 20 years ago,” he said. But that hasn’t stopped him from moving forward.

“I don’t want my kids or grandkids to say, ‘Why didn’t Dad take care of those when he could?’ ” he added. “The time to get them is now.”