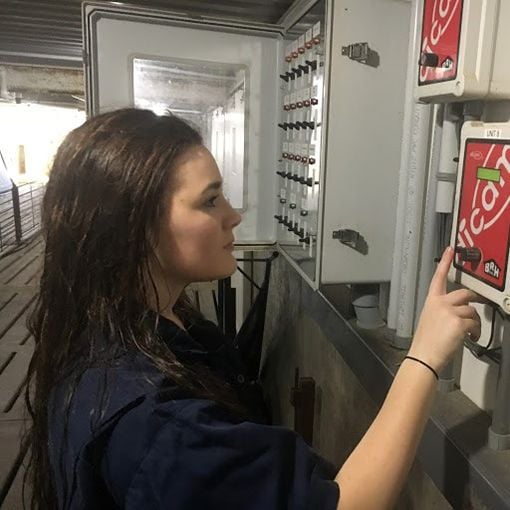 Mekenzie adjusts the temperature inside the pig barn. Temperature control and the environment is critical to optimal pig health and growth. With the press of a button, Mekenzie can also adjust vents and fans to control humidity and ventilation in the pig barn. 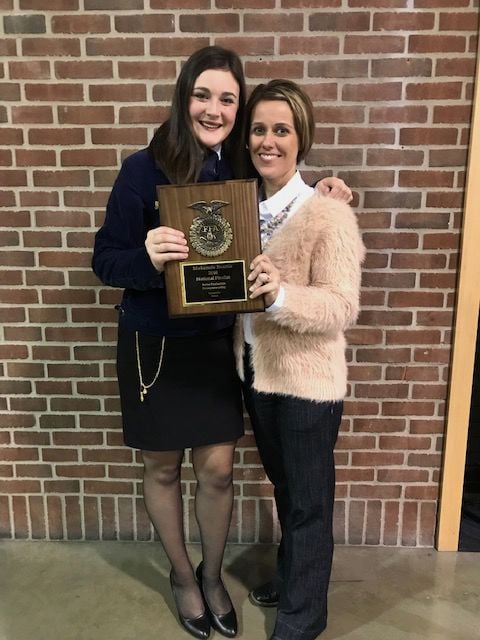 Mekenzie Beattie with her agricultural education teacher and FFA advisor Janice Wolfinger at the National FFA Convention in Indianapolis after receiving her plaque for being a national proficiency finalist in Swine Entrepreneurship.

Mekenzie adjusts the temperature inside the pig barn. Temperature control and the environment is critical to optimal pig health and growth. With the press of a button, Mekenzie can also adjust vents and fans to control humidity and ventilation in the pig barn.

Mekenzie Beattie with her agricultural education teacher and FFA advisor Janice Wolfinger at the National FFA Convention in Indianapolis after receiving her plaque for being a national proficiency finalist in Swine Entrepreneurship.

INDIANAPOLIS — Being different is OK and that’s exactly what Mekenzie Beattie attributes to her success in making it to the final four in the Swine Proficiency area and on stage at the 91st National FFA Convention last month.

There are 50 proficiency areas and with more than 650,000 members in the student agricultural education organization nationwide, it’s very competitive. Winning a state proficiency award is huge and being recognized at the national level is phenomenal.

A proficiency usually begins in a student’s freshman year when they meet with their agricultural education teacher and FFA advisor and decide what their supervised agricultural experience (SAE) will be. An SAE is an FFA project that they have developed specialized skills that they can apply toward their future careers. There are four types of proficiency areas: placement, which is related to employment; entrepreneurship, which is based on ownership; combined, which focuses on placement and entrepreneurship; and agriscience, which involves planning and conducting a scientific experiment.

“My SAE was in the area of swine production entrepreneurship,” Beattie explained. “In my project, I have a unique opportunity of growing up as the sixth generation on a family farm, where our focus is swine production. Since my family’s swine production enterprise is primarily centered on the weaning and finishing of swine, I decided to put my focus in this area. My advisor, parents and I worked out an agreement so I could have a full experience of the production side of the swine industry.”

A plan for pork

First, Beattie developed a plan involving the production of a group of pigs from the weaning phase of the pigs’ life all the way through the finishing phase of pork production.

“I had no capital resources as I was given the unique opportunity of partnering with my family’s swine entity, where I paid rent for barns and equipment,” the young entrepreneur said. “My SAE is very different from other swine entrepreneurship proficiencies because it is focused on production hogs from a larger scale. I think being different helped me stick out and being nationally recognized.”

Beattie’s SAE included taking ownership of one percent of a specific group of pigs and tracking them from farrow to finish, or — in layman’s terms — birth to market.

It was a bonus being a part of the family operation, according to Beattie. Each finishing group of hogs is approximately 6,500 head, which is standard for wean-to-finish operations, therefore Beattie’s share at one percent was 65 head per group that she was always responsible for on a daily basis.

“This setup allowed me to capitalize on resources from a larger scale production system and would maximize my learning experience,” she added.

Beattie is no stranger to long days and hard work, but said it was well worth it and being part of the family business.

“What I enjoy most about my family farm is getting to feed the world, with my family,” she pointed out. “I have enjoyed working in the hog barns, handling and working cattle, and also being a part of the crop side of things as well, such as harvest, and irrigation. I really enjoy all aspects of our diversified farm.”

The Beatties operate 2,000 acres of crop, beef and swine production near Sumner. Beattie is hands-on with every aspect of the family operation.

“I’ve learned the importance of raising healthy and quality pork and tracking their progress through the production cycle, focusing on day-to-day management and needs of swine to maximize efficiency,” she explained. “I have also gained skills in data entry and analysis as well as the market and choices in selling pork.”

Beattie said her years in the Sumner-Eddyville-Miller (SEM) FFA Chapter helped shape her into the leader she is today, crediting the valuable guidance from her FFA advisor, Janice Wolfinger. While in the SEM chapter, she held the offices of treasurer, chaplain and president.

“In my FFA career, my advisor had a tremendous job of teaching me knowledge about agriculture, helping me develop skills, and pushed me to be the best I could be,” Beattie said. “She also pushed me to take on more and try to new things.”

Wolfinger said working with Beattie was such a pleasure and that she was always willing to take on more challenges.

“When Mekenzie was selected as a national finalist in swine entrepreneurship, it was a chapter milestone,” Wolfinger said. “Having two national proficiency finalists in entrepreneurship in the last two years from a small chapter of less than 50 students in two years is a remarkable feat for our chapter and will be greatly beneficial to our community. Entrepreneurship is vital to the growth of sustainability of rural towns in Nebraska.”

This is Wolfinger’s 16th year as an agricultural educator and FFA advisor, and her fifth year with the SEM FFA Chapter.

“Mekenzie has been successful because she has put a great deal of time and energy into the agricultural education program here at SEM,” Wolfinger explained. “Beattie has taken every challenge that I gave her as a teacher. Mekenzie never said no and even when she doubted her ability or the task at hand she always took direction, worked hard and gave her best effort.”

Beattie said her greatest supporters have been her parents Shana and Bart Beattie.

“My dad, Bart Beattie played a huge role in my SAE,” Mekenzie said. “He helped me understand our family’s operation and what we do. He also taught me the ins and outs of the pork industry and what it is like to raise hogs on a large production scale.”

The Beatties are extremely proud of their oldest daughter.

“While this has been a tremendous project for her, to learn entrepreneurship and real-life swine production, we are most excited that she has immersed herself into our fifth generation family farm,” Shana said. “As the potential sixth generation, she already has a great start in understanding the family business. This experience has just deepened her passion for advocacy in animal agriculture.”

Mekenzie loves all aspects of her family’s farm.

“With my SAE I am responsible to make sure the pigs were healthy and that they have enough clean feed and water, and a safe environment,” the swine producer explained. “I also am responsible for keeping the records of the income, expenses and efficiencies of the pigs. Some other tasks I do on the farm are spraying thistles, operating machinery, working cattle, and irrigating crops.”

In addition to loving everything agriculture, Beattie credits the FFA program for making her a more rounded person.

“I enjoyed the opportunity to compete in events and develop skills that I will always be able to use in the future,” she pointed out. “I also enjoyed exploring many different career options in the agriculture industry and making friends in FFA contests.”

She also believes the FFA is responsible for making her a stronger public speaker.

“Through FFA I gained skills that I could not in other organizations,” Beattie said. “I developed communication, problem solving and evaluation skills. I think the relationships I made with people in the ag industry and other FFA members was also something that was important that I gained.”

A future in agriculture

All of these experiences will serve her well as Beattie pursues an agricultural business degree specializing in agronomy the University of Nebraska-Lincoln.

“After college I am interested in going out into the field of agronomy and getting experience under my belt,” she said. “I’d like to go into ag sales right after college, and down the road I really hope to own my own business as an agronomist.”

Beattie plans to continue helping the family’s diversified operation when she’s home from college. Whether it’s the hog operation, cow/calf or row crops, she has gained much experience on the family farm.

According to Wolfinger, Beattie is prepared for many careers.

“When Mekenzie graduated last spring, I felt confident that she had the knowledge to excel at UNL and major in agriculture business, where she is also involved in the Engler Entrepreneurship Program,” Wolfinger explained. “Mekenzie was successful in several activities through the agricultural education program including top five in the state finishes in range management, speaking, livestock management, meats, welding, agricultural issues, farm business management, envirothon and agricultural sales, along with her success through her SAE in swine entrepreneurship. This wide range of knowledge allowed her to explore many careers along with gaining skills in a wide array of agricultural industries.”

According to Wolfinger, agricultural education and the FFA are crucial for schools, especially in Nebraska where most of our tax dollars are generated from agriculture.

“Students who don’t have a solid foundation of agriculture will become adults not understanding the importance of agriculture to their lives,” Wolfinger pointed out. “When you don’t understand where your food comes from, who pays for your child’s education and how the roads are built for you to get to work you often get misinformed and make uninformed decisions.”

Not all FFA members will earn the opportunity to walk across the stage at the National FFA Convention, but if agricultural education students put in the effort to the program, studies have shown they are the more successful leaders in our communities.

“When we explore ways of improving our country and we look at the fact that a majority of our population attend public schools, public school systems have the opportunity to shape entire communities,” the SEM ag educator added. “We need to continue to grow the career skills offered to our students and agricultural education with the FFA is doing that.”

Becky Chaney can be reached at becky.chaney@midwestmessenger.com.

Rebecca Chaney is a freelancer writer for the Midwest Messenger, based in south-central Nebraska. Reach her at editorial@midwestmessenger.com.