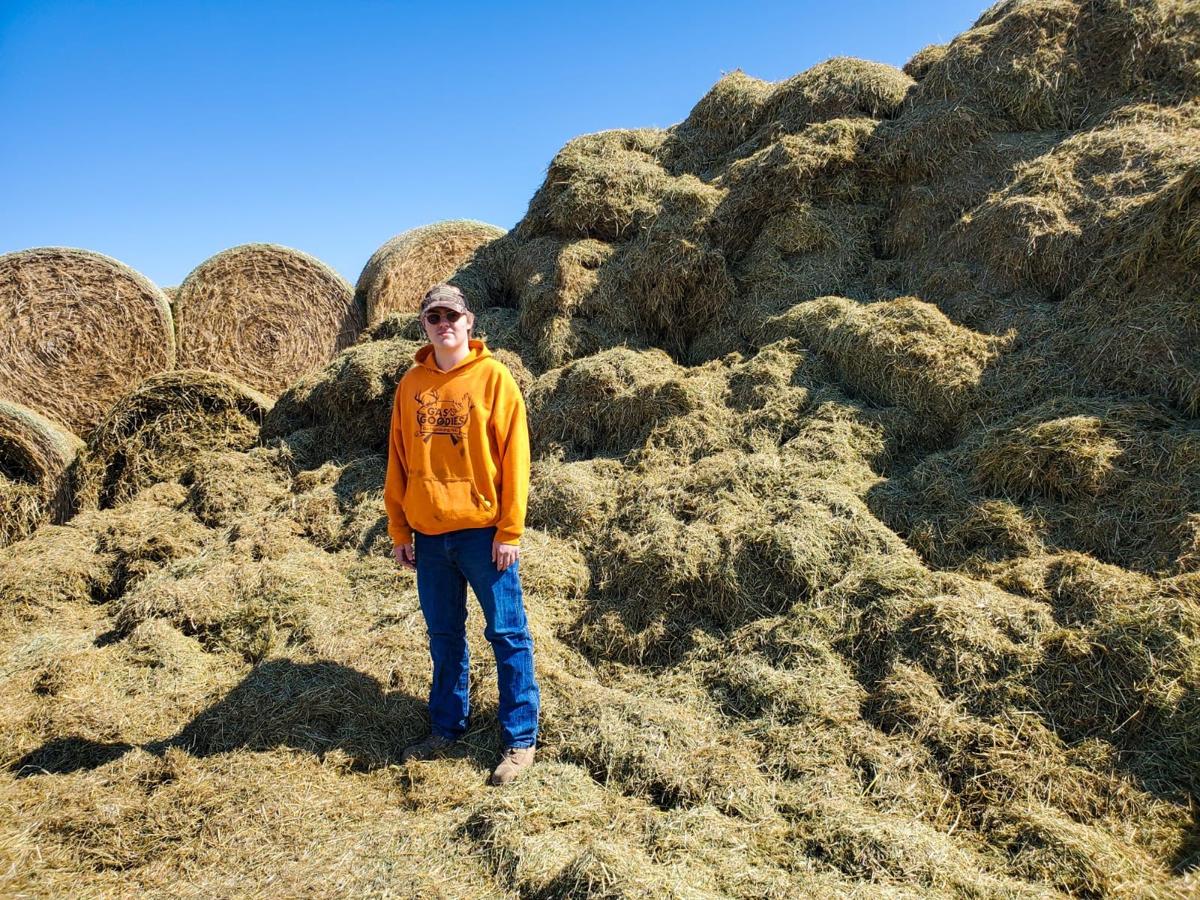 Caleb Mangin, a fifth-generation cattle producer stands on a pile of ground millet. The millet was between 20-30% moisture when Caleb and his dad, Todd, baled in summer 2019. They applied a product to preserve its quality and reduce risk of spoilage. The Mangins run a cow-calf herd near Gettysburg, South Dakota. 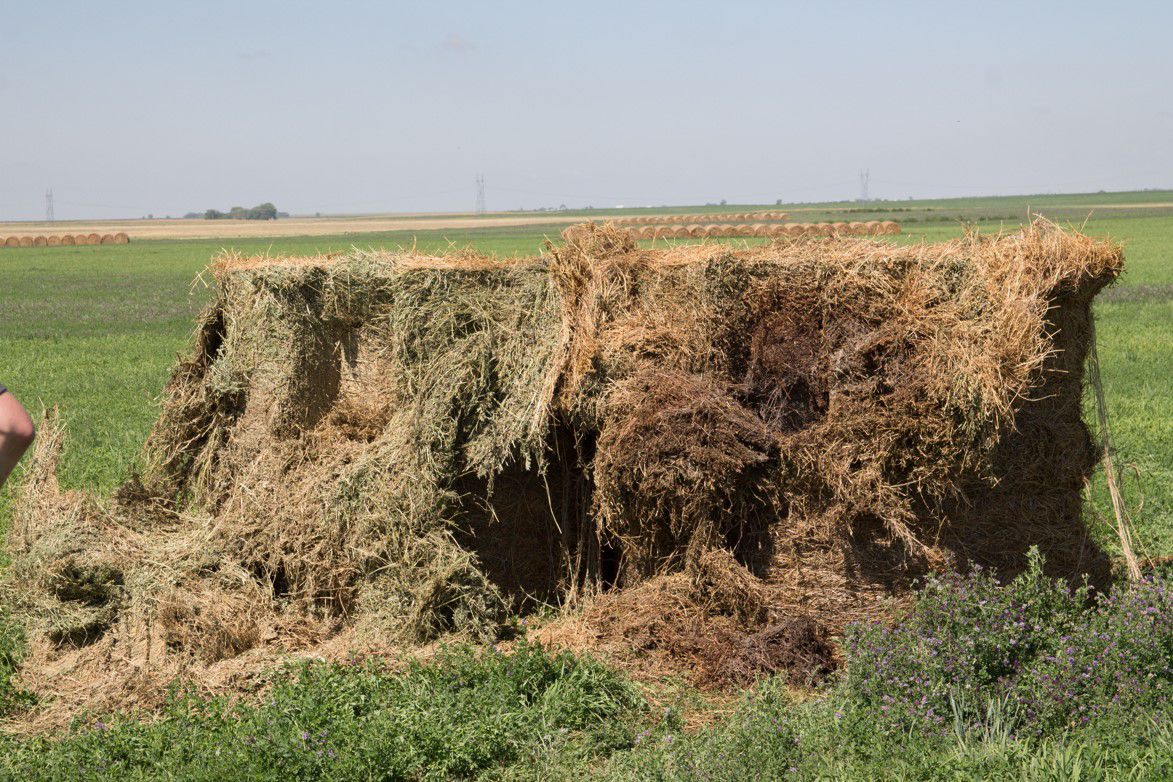 Two alfalfa bales sit side by side for comparison. Both were baled at over 25% moisture. The bale on the left was treated with a preservative, and the bale at right was not. 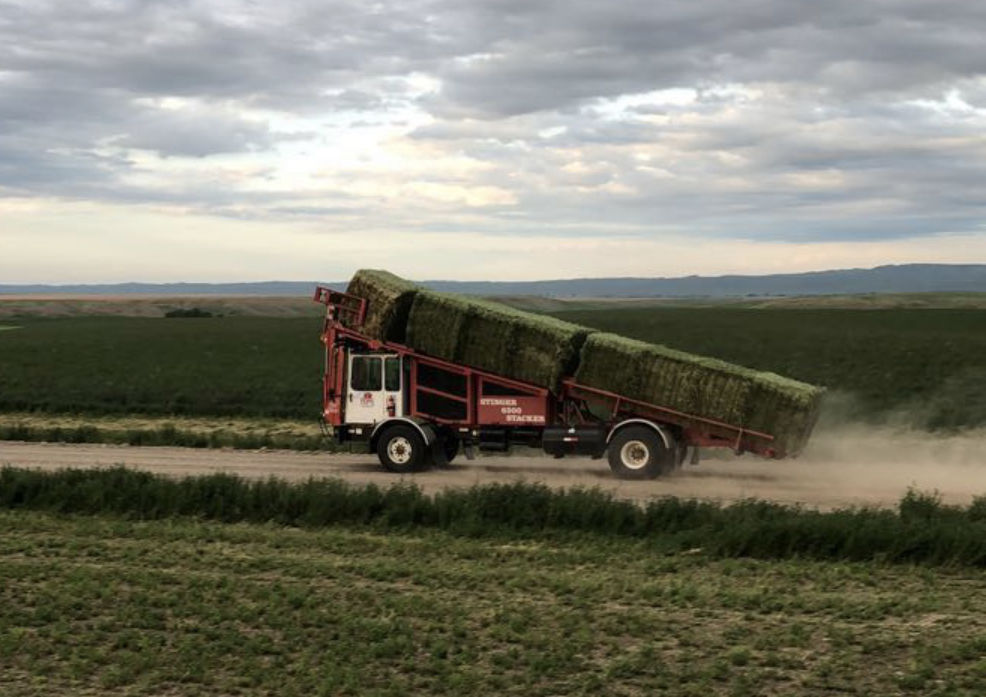 Extending the baling window matters to the Dorn family who operates a hay business on their Hardin, Montana farm.

This infographic shows how Anchor works to speed up the curing process, reduce temperatures in high moisture hay, and prevent spoilage and preserve hay quality.

Bryant Dorn remembers the days when he baled hay until dawn. Excess moisture in recent years put a stop to the Montana farmer’s all-nighters.

With dairy and cattle producers across the country counting on his family’s farm to provide them with quality forage, Dorn was determined to find a way to extend the baling window. In 2018, his family began applying a preserving product as they square baled more than 3,500 acres of alfalfa.

“We use this as insurance. It preserves the quality, prevents rot and lets us push the moisture limit,” he said of the hay preservative. “If it saves a couple bales, it pays for itself.”

The product is designed to reduce risk of heating and spoilage, allowing producers to bale higher moisture hay.

Quality matters. Depending on the year and the markets, the family’s hay business accounts for a large portion of the farm’s overall income. In addition to raising commercial alfalfa, Dorn, his dad and brother also raise cattle, sugar beets, corn and barley near Hardin, Montana.

“Before, we would always have a lumpy, mold spot in at least a few bales. Now, we don’t see rot in our bales,” Dorn said. “Because it’s granular, we don’t worry about it rusting our balers.”

Hay baled at higher moisture levels reduces the risk of leaf loss. In alfalfa, the leaves contain 70% of the plant’s protein and 90% of its vitamins. A long-term hay trial in Minnesota showed bales treated with a hay preservative from Agnition, cured faster and maintained relative feed value 30 points higher than control.

Being able to bale in higher moisture conditions, while at the same time preserving hay quality are the reasons Todd Mangin began using the hay preservative in 2015.

“Every time it gets rained on, hay loses feed value and quality. This year a lot of neighbors were fighting mold in hay. I didn’t have a problem,” said the Gettysburg, South Dakota cow-calf producer. “I also notice a difference in hay quality. The hay is just green. You don’t get those tobacco spots in the alfalfa. And the cows are more apt to clean it up.”

The product can also be used when baling corn stalks. In addition to alfalfa, last summer Mangin also applied the product while baling millet. He was waiting for it to dry down when five days of rain were forecast.

“It was a case where we either bale it or we were not going to get it,” he said.

“It maintained its quality. Also, it doesn’t heat up in bales or a pile,” he said.