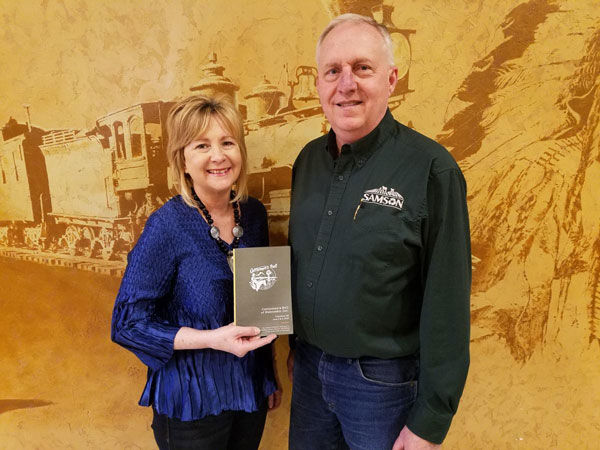 Pat, left, and Scott Mueller pose for a photo in front of a mural inside the Evans House in downtown Columbus while showing off a brochure for this year’s Cattlemen’s Ball, which was set to take place on their land this summer and has now been moved to 2021. 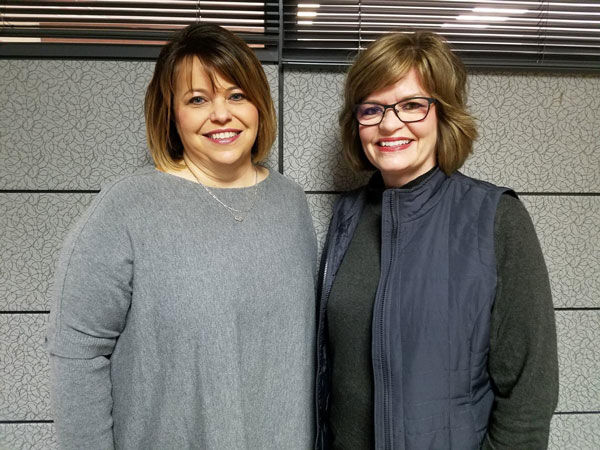 Cattlemen’s Ball 2020 Activities co-chairwomen Brenda Blatchford, left, and Karin Rieger pose for a photo. The two said they’re excited to be part of the event as a way to honor their late friend.

Pat, left, and Scott Mueller pose for a photo in front of a mural inside the Evans House in downtown Columbus while showing off a brochure for this year’s Cattlemen’s Ball, which was set to take place on their land this summer and has now been moved to 2021.

Cattlemen’s Ball 2020 Activities co-chairwomen Brenda Blatchford, left, and Karin Rieger pose for a photo. The two said they’re excited to be part of the event as a way to honor their late friend.

Longtime Platte Center resident Rita Jazwick was looking forward to volunteering her services to the Cattlemen’s Ball when she found out the 2020 edition was going to be held in Columbus, Nebraska.

Jazwick had numerous conversations with Columbus friends Brenda Blatchford and Karin Rieger about her excitement over it. But in February 2019, everything changed as Jazwick was diagnosed with Stage IV colon cancer.

“It really hit home when she told us she was diagnosed,” Blatchford recalled. “What’s ironic is that she was probably the healthiest.”

Jazwick passed away in summer 2019, but Blatchford and Rieger are keeping their friend’s memory alive, in a way, by serving as the activities co-chairwomen for the next Cattlemen’s Ball. The event is considered to be the “state’s biggest party,” but truly is an annual fundraiser dedicated to funding cancer research and finding a cure while also showcasing rural Nebraska and promoting beef in a healthy diet.

The ball was set to take place June 5-6 on 210 acres belonging to Scott and Pat Mueller that is approximately 5 miles north of Dickie Doodles. The COVID-19 outbreak caused the 2020 ball to be canceled, but the Muellers have committed to hosting next year, and the volunteers will soon be back in action.

All said and done, 800-1,000 volunteers help make successful a weekend that has already been in the works for essentially two years.

It all started in 2018 when Columbus native Scott got to talking with his wife, Pat, about the prospects of Columbus hosting the event. The two had been to previous balls and thought their hometown was more than capable.

“I always thought Columbus should have a ball here to showcase its features and the ag culture we have here,” Scott said.

They eventually got the ears of those involved with the nonprofit organization and initially pitched Pawnee Park as a possible site host. But officials were concerned with the traffic patterns there, so the Muellers offered up their land.

“It’s going to be a huge pasture party,” Pat said before the cancellation, which was announced March 26.

Once they got the green light to host, the Muellers then began talking with area residents about volunteering to help make it happen.

“We were very confident that we could do it as a community,” Scott said. “As soon as the board expressed interest in having it here, we made a few phone calls and everyone was (willing).”

That interest has intensified in the last year-and-a-half. A core group of local volunteers went to last year’s ball to take it in, learn what it’s all about and get some ideas for this year’s installment. Local committees were also formed. In addition to the Muellers, Blatchford and Rieger in their roles, Jim and Ivy Klug and Ryan and June Loseke are serving as site chairs; Nicole Saalfeld, Sheila Huebert and Eugene Goering are food and beverage chairs; Crystal and Beau Klug are handling promotions; and Rick and Tracie Chochon are underwriting chairs. Lisa Kaslon is also the volunteer coordinator, responsible for organizing others in the area who want to pitch in.

The list for volunteers was growing steadily as spring began, according to Kaslon. She said she’s getting people locally and from around the state stepping up to help out with various tasks, but noted plenty more are needed as the ball is a massive project.

“The list continues to grow all of the time – we’ll need people to help setup, tear down, working the event by serving food and drinks, drive shuttles, cleanup,” she said. “I think it’s amazing Columbus has this opportunity. It takes a lot of people to step up, it takes a lot work … it’s a big deal.”

The event draws volunteers from all around the area.

“It’s not a Columbus event, it’s a regional event,” Pat said, noting people in Colfax and Butler counties have also already stepped up to help. “It’s a Nebraska event.”

Since 1998, the ball has raised nearly $15 million to fight cancer. Each year, 90% of the proceeds go toward research at the Fred & Pamela Buffett Cancer Center in Omaha. A nonprofit charity, the Cattlemen’s Ball donates the remaining 10% of dollars raised to Nebraska communities for health and wellness programs. Those in the Columbus area region (a 45-mile radius) will be eligible to apply for those funds, according to the Muellers.

Blatchford and Rieger said the most endearing thing about organizing the event is the commitment of the many volunteers.

“It’s been really exciting to watch everyone spin ideas off one another and work together,” Rieger said. “People who really didn’t know each other are building friendships off this one event.”

Kaslon, in a separate conversation, shared a similar perspective.

“It’s a lot,” she said. “It’s exciting we’re able to showcase our area, but more importantly, bring our community together for a great cause, which is something Columbus does naturally.”

Although the volunteers come from all walks of life, they all share one common denominator: Cancer has somehow affected their lives — whether directly or indirectly.

“I’ve had family members and friends that have been affected by cancer. Some have won their battles, some unfortunately have not,” Blatchford said. “So if there’s something that I can do – more than just giving that donation periodically to fundraisers — I will do that.”

Loved ones like Jazwick will be on the minds of many as preparations continue for next year’s ball. Jazwick, according to those who knew her, was full of energy and zest. She was hardworking, compassionate and loved to bake and meet with her book club, which Rieger and Blatchford were also members.

“She was very strong and independent,” Rieger said.

The Cattlemen’s Ball will undoubtedly be a chance to showcase Columbus to the 4,500 people who attend the banquet, but more importantly, an opportunity to honor those currently on a cancer journey and keep the spirits of those who are no longer here, like Jazwick, alive.

Matt Lindberg is the managing editor of The Columbus Telegram. Reach him via email at matt.lindberg@lee.net.