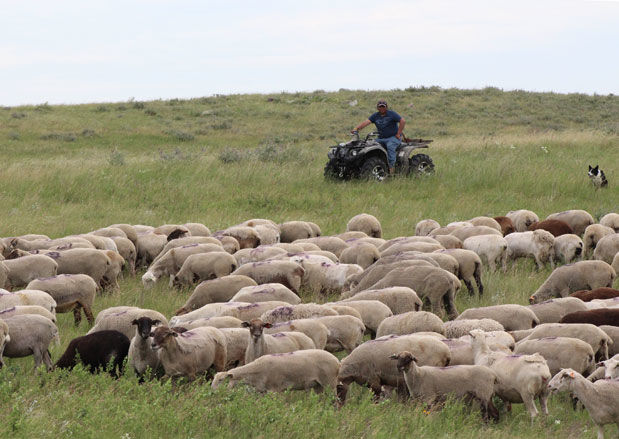 Shepherd Angel Jesus Huaynalaya Catillo and his dog guide sheep on the Rock Hills Ranch of north central South Dakota. The ranch owners, Lyle and Garnet Perman and their son Luke enlisted the help of a sheep flock to control weeds on their cattle pastures. 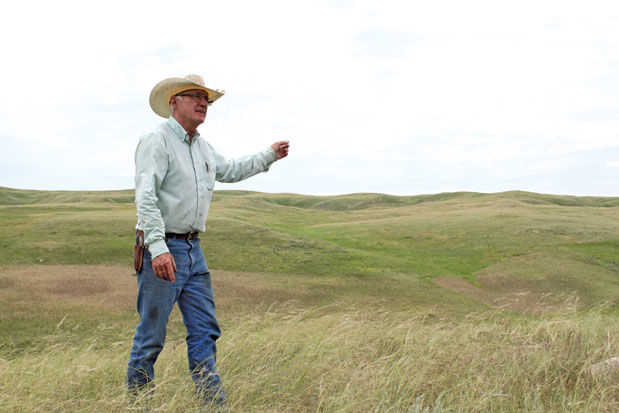 Lyle Perman explains the Rock Hills Ranch approach to weed control on a ridge overlooking patches that had been intensively grazed by a flock of sheep. 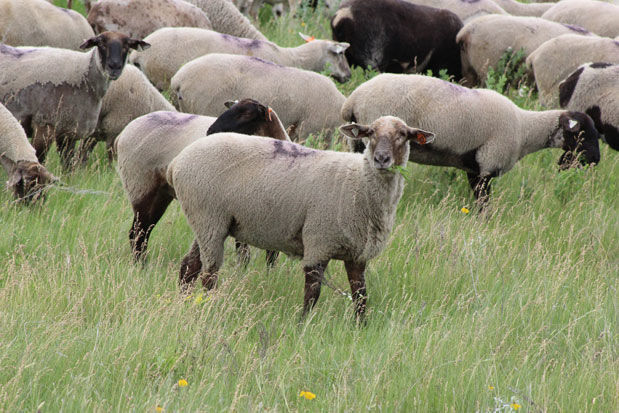 Sheep from VanWell Livestock graze a patch of leafy spurge on the Rock Hills Ranch north of Lowry, South Dakota. 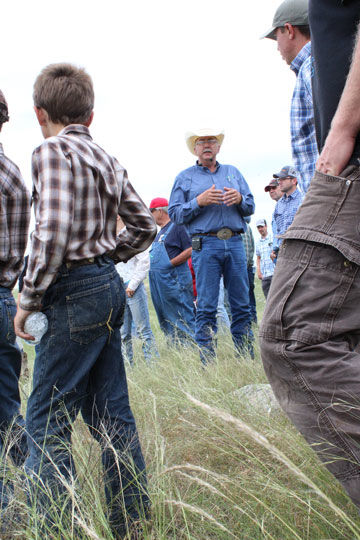 SDSU Extension sheep specialist Dave Ollila talks with tour participants at the Rock Hills Ranch on July 8. Sheep and cattle can complement each other in a grazing system, he said. 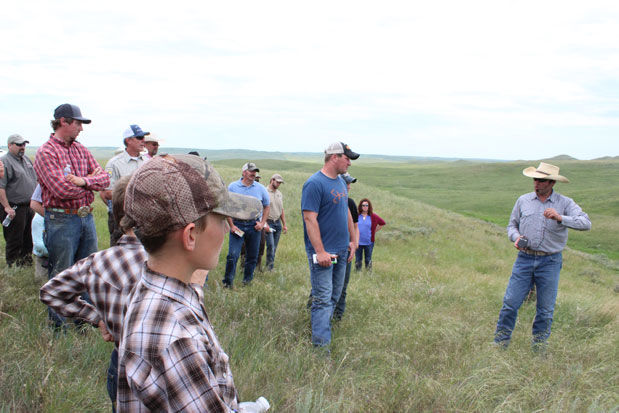 Luke Perman, right, discusses grazing during a tour at the Rock Hills Ranch July 8. Perman revised grazing plans to fit sheep into rotation with his cattle. 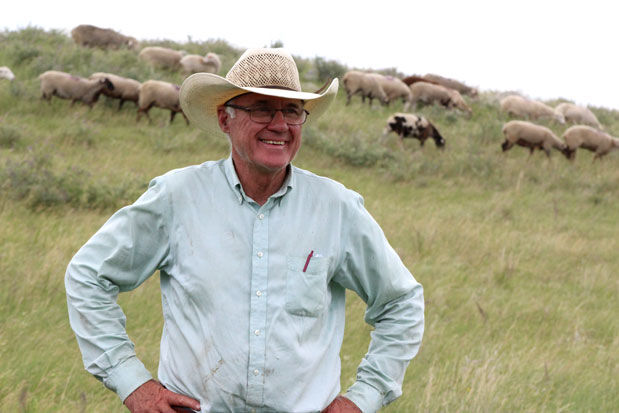 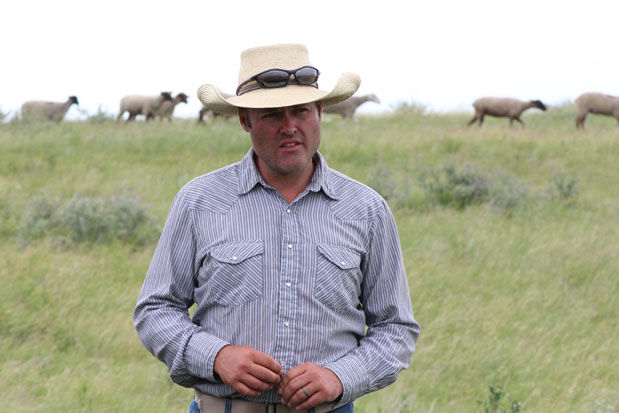 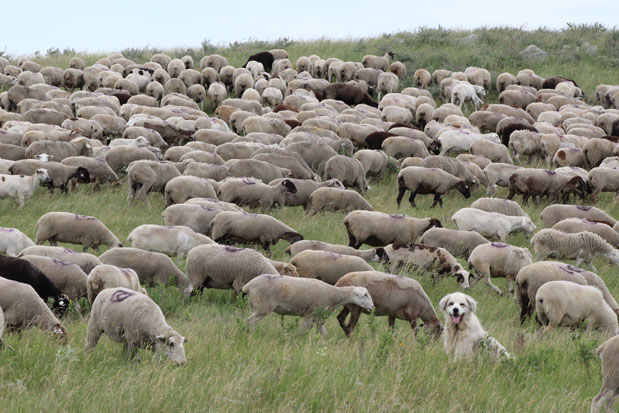 A sheep dog watches the flock on the Rock Hills Ranch.

For the first time in more than 40 years, there are sheep roaming the pastures of the Rock Hills Ranch near Lowry, in north central South Dakota, and they’ve got one specific job — weed control.

Lyle and Garnet Perman, who run with ranch with their son Luke, have enlisted the help of 1,000 sheep to rid their pastures of invasive weeds the cattle won’t eat — especially leafy spurge.

The Permans have been trying to control the yellow flowering plant with different tactics for years. They enlisted flea beetles to do the job in 2006, and it worked well for about a decade until results plateaued.

“We needed to do something different,” Luke said.

The 1,050 Suffolk-hair sheep crosses are visiting for the summer from a major sheep feedlot operation about 160 miles away.

“This was a way to dip our toe in and see what it’s like,” Luke said.

The Permans hosted a tour on a hot and breezy afternoon July 8 when about 60 people came to see the sheep in action and learn about weed control. The flock had been on the ranch for 60 days, and already the Permans were seeing results.

Standing on a ridge overlooking patches of intensively grazed pasture, Lyle explained their approach. The squares were areas where the shepherd had set up moveable pens, 100 feet by 100 feet. Sheep grazed there for two days.

Sheep prefer forbs to grasses, so the bushy plants and abundant yellow clover were gone. Patches of Canadian thistle remained, but given another day, the sheep would likely have consumed that, too.

“They’re a lot more efficient than a cow,” Luke said.

That doesn’t mean he’s looking to shift his family ranch to raising sheep. The cattle have a role to play as well, he said.

The sheep take care of the big patches of problem weeds at the Rock Hills Ranch, but that doesn’t mean the pastures are chemical-free. The Permans spray small patches, and the worst of it will take some effort to control.

“We’re not going to get rid of leafy spurge in one year,” Lyle said. The Permans are able to fit sheep in with their operation because they understand the stocking rates their pastures can handle.

Luke was behind the logistics of bringing sheep to the ranch. He spent the winter revising his grazing plan and working out the details with the Van Well family, who have the large sheep feedlot based in Watertown, S.D.

The sheep arrived at the ranch in late May. The Van Wells supply a shepherd to tend them and four dogs to help protect and move the flock.

The shepherd moves their day pens — measuring 400 feet square — to concentrate on leafy spurge, wormwood, western snowberry and other things that cattle won’t eat. By trimming down on leafy “undesirables,” the native grasses cattle like best can grow strong without competition.

Sheep can make quick work of a leafy spurge plant, and it’s good for them, providing 15 to 20 percent protein.

The Permans would eventually like to arrange their grazing plan so the sheep come through a pasture immediately following the cattle. Luke said it’s a bit of a logistical headache providing water for both sheep and cattle because the two don’t get along at the tank.

They can learn to like each other, given the time, said Dave Olilla, sheep specialist with South Dakota State University Extension. He runs his cattle and sheep together in western South Dakota, and the cattle serve as a guard to the predator-vulnerable sheep. They have to bond, he said, so it works best with younger ewes.

The sheep will comb the pastures of the Rock Hill Ranch until October when they’re ready for lambing season.

This season has been a learning opportunity for the Permans. Already, Luke is convinced that they could host twice as many sheep, increasing from two to four sheep per cow running their pastures.

The approach the Permans are taking to weed control is a new take on the old way of doing things with a diversified livestock operation, Ollila said. Working with cattle producers gives young sheep growers a new option when looking for land, he pointed out.

The VanWells pay a flat rate per head per month for use of the pastures. The Permans provide the forage, water and a place for the shepherd to stay.

Keeping the sheep contained and safe from predators can be an issue.

The ranch isn’t making money on the arrangement, Lyle said, but it’s economically feasible when considering the money they’ll save on weed control chemicals. Another benefit is how removing weeds will impact the productivity of their pastures in the future. The sheep give leafy spurge a whole new look in the Perman’s eyes.

“If we can turn that around and generate income for us, then it’s not as much of a weed,” Luke said.