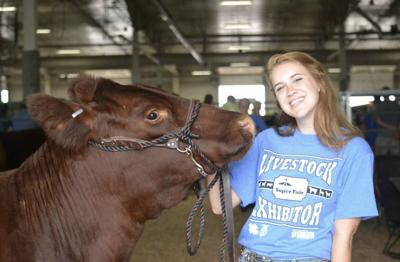 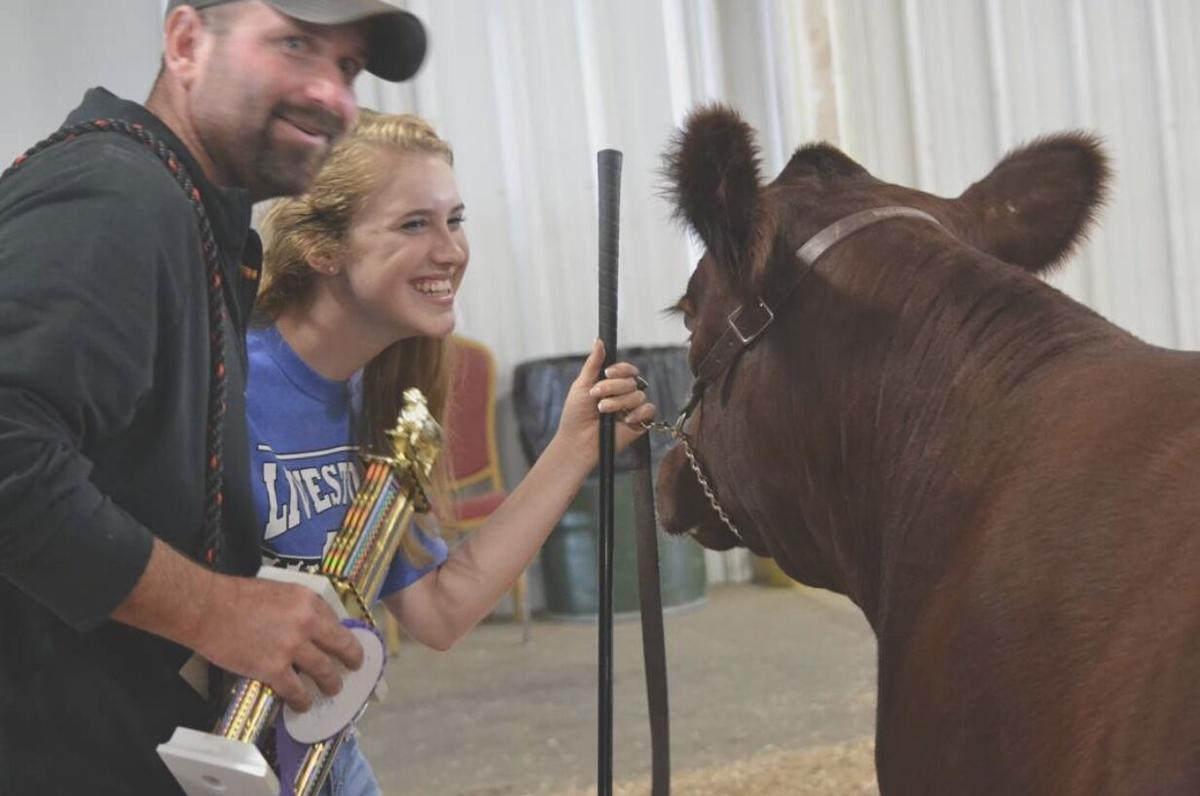 Madysen Cox celebrates after winning showmanship at the 2017 Lancaster County Fair with her Shorthorn heifer. Celebrating with her is Squire Johnson, a friend who has taught her more about showing. 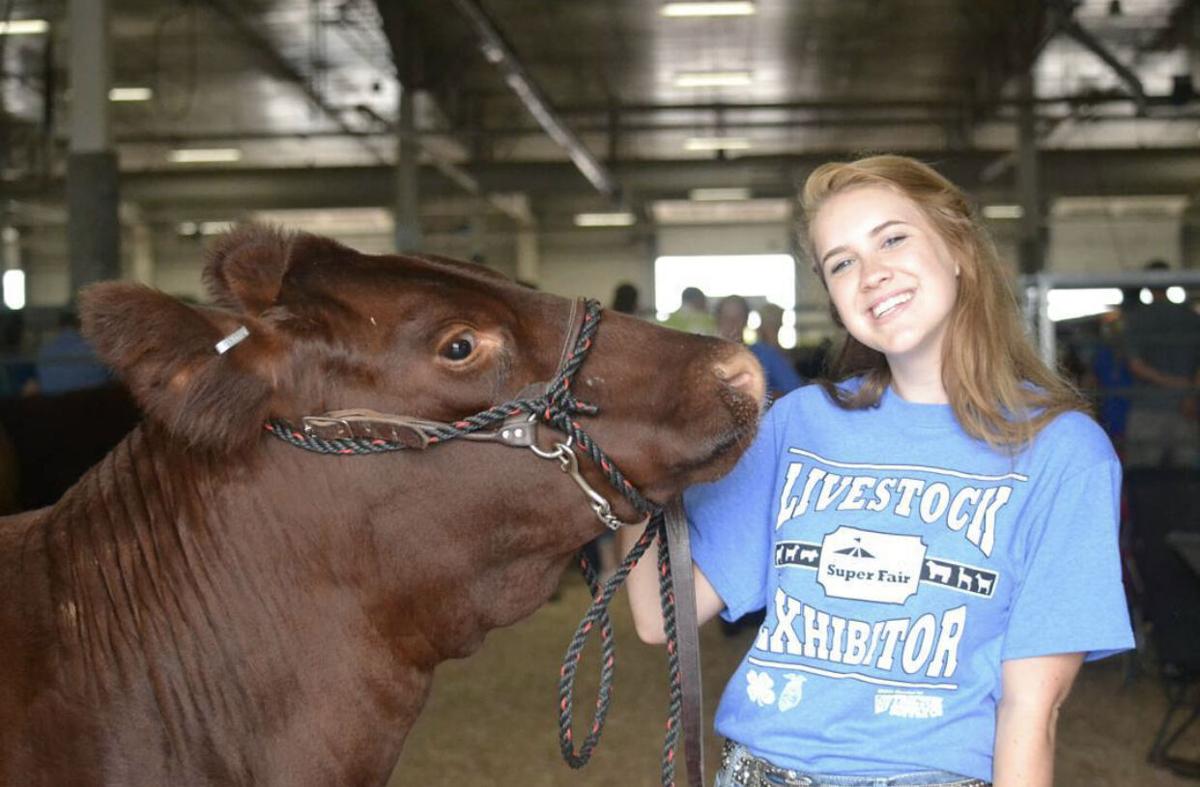 Madysen Cox, of Bennet, Neb., has shown Shorthorn cattle for the past five years, after having fallen in love with the cows in her backyard.

There’s a Nebraska cattlewoman who didn’t grow up a cattle girl.

When Madysen Cox of Bennet saw the neighbor’s cows in the pasture next to her backyard near Roca, Nebraska, she was intrigued.

She was 14, and she and her older sister, Cassidy, would watch them.

Madysen was fascinated: she tried to feed them, touch them, and she memorized their names, which were printed on their ear tags.

When the cattle’s owner, Greg Crawford, came to load cattle, he had to ask the girls to move so they would load.

But Madysen’s heart was set on cows.

Crawford asked her if she wanted to show one, and she said yes. Within a week, she was at his farm, with a Shorthorn heifer borrowed from Crawford. Her first year in a show ring, in 2015, she exhibited at progress shows around the state, traveling with Crawford, his wife Jodene and their grandkids, who were also showing.

She was a natural, Crawford said, with being around cattle and showing.

“She’s very good at it. She’s good with cattle. She knows how to work with them,” he said.

As a junior high student, she was at the Crawford farm a couple times a week. As payment for her showing a Crawford Shorthorn, she helps with chores around the farm.

“She used to call and say, ‘can I come over?” he remembered.

He taught her how to show and how to care for cattle. Others helped too, including Crawford’s grandkids and Squire Johnson, who showed with Crawford’s daughters at the Shorthorn Junior Nationals in the 1990s. Johnson, who clips and fits cattle, has taught her a lot, she said.

She’s traveled with the Crawfords to show in Kearney at the Nebraska Cattlemen’s Classic, the Shorthorn Junior Nationals, and across the state. She’s shown at shows in Wisconsin, Minnesota, Oklahoma, Texas, Tennessee, and more.

And her showing skills have progressed. In 2017 and again in 2020, she won showmanship at the Lancaster (Nebraska) County Fair.

“When I first showed, I didn’t know what I was doing,” she said.

But Cox has a natural ability with cattle, Crawford said.

“Some people have that natural ability, and she has it," he said. “Cows trust her. She can tame them pretty fast.”

She’s grown from her experiences with cattle, too.

“It helps me be more confident,” Cox said. “I used to be shy and not talk to people, but when you go to cattle shows, everybody’s real friendly. You can talk to anybody.”

At a national show a few years ago, her cattle were stalled next to cattle from Alabama, and she struck up a friendship with the girl who showed them, which continues today.

“I used to be really shy but not anymore,” she said.

Now that Cox is a college student at Southeast Community College in Beatrice, Nebraska, she doesn’t come out to the farm as often. She’s there about once a week, to prepare animals, in the winter, and in the summer, four or five times a week.

“When she comes, she jumps right in and helps with things,” Crawford said.

“I just really like working with animals,” she said. “Ever since I started showing cattle I’m really into it. I’m going to school for livestock management, and I want to work with cattle for the rest of my life.”

She will graduate from SCC in the fall of 2021. She is the daughter of Brian and Jamie Cox.

Madysen Cox celebrates after winning showmanship at the 2017 Lancaster County Fair with her Shorthorn heifer. Celebrating with her is Squire Johnson, a friend who has taught her more about showing.

Madysen Cox, of Bennet, Neb., has shown Shorthorn cattle for the past five years, after having fallen in love with the cows in her backyard. 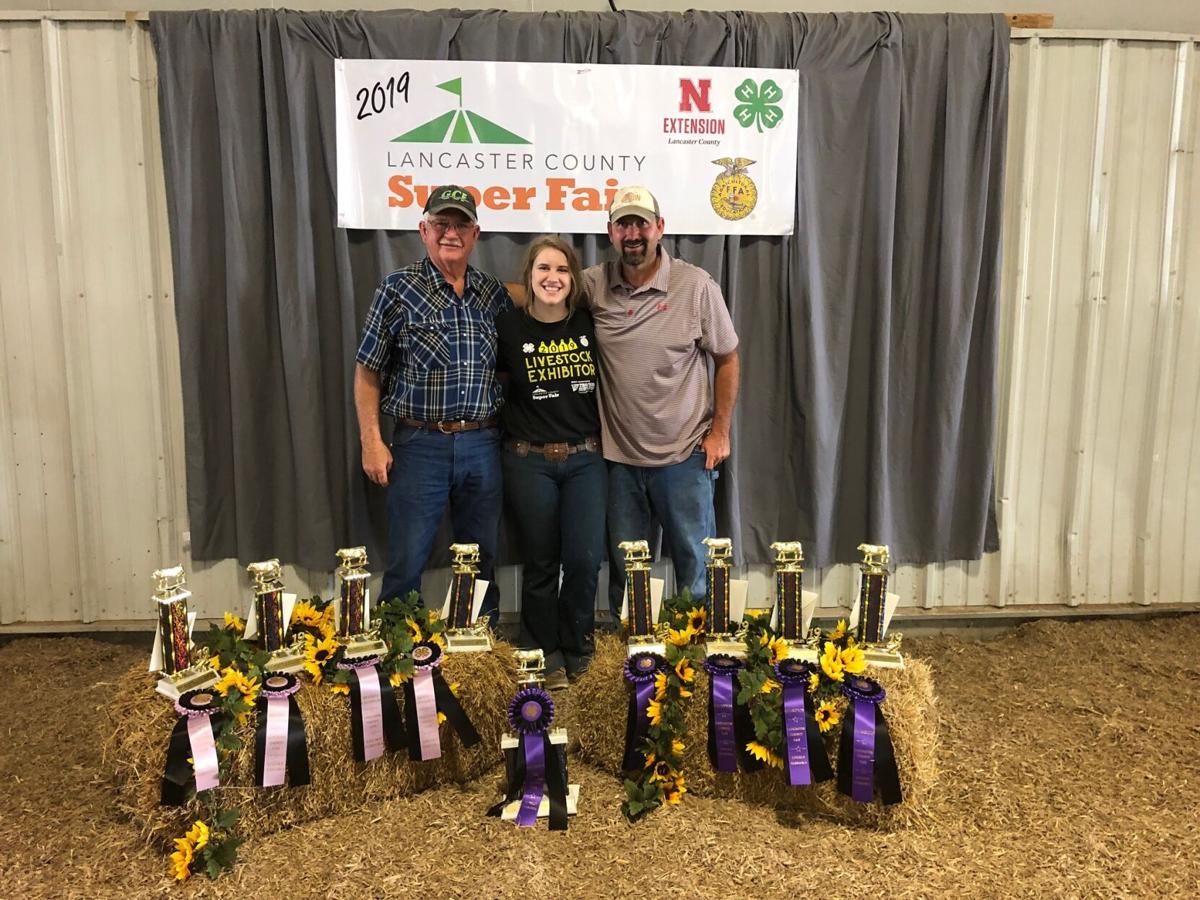 Madysen Cox stands with the trophies she won at the 2019 Lancaster County Fair. On the left is Greg Crawford, the man responsible for her start in showing cattle. On the right is Squire Johnson, who has helped her learning more about showing. 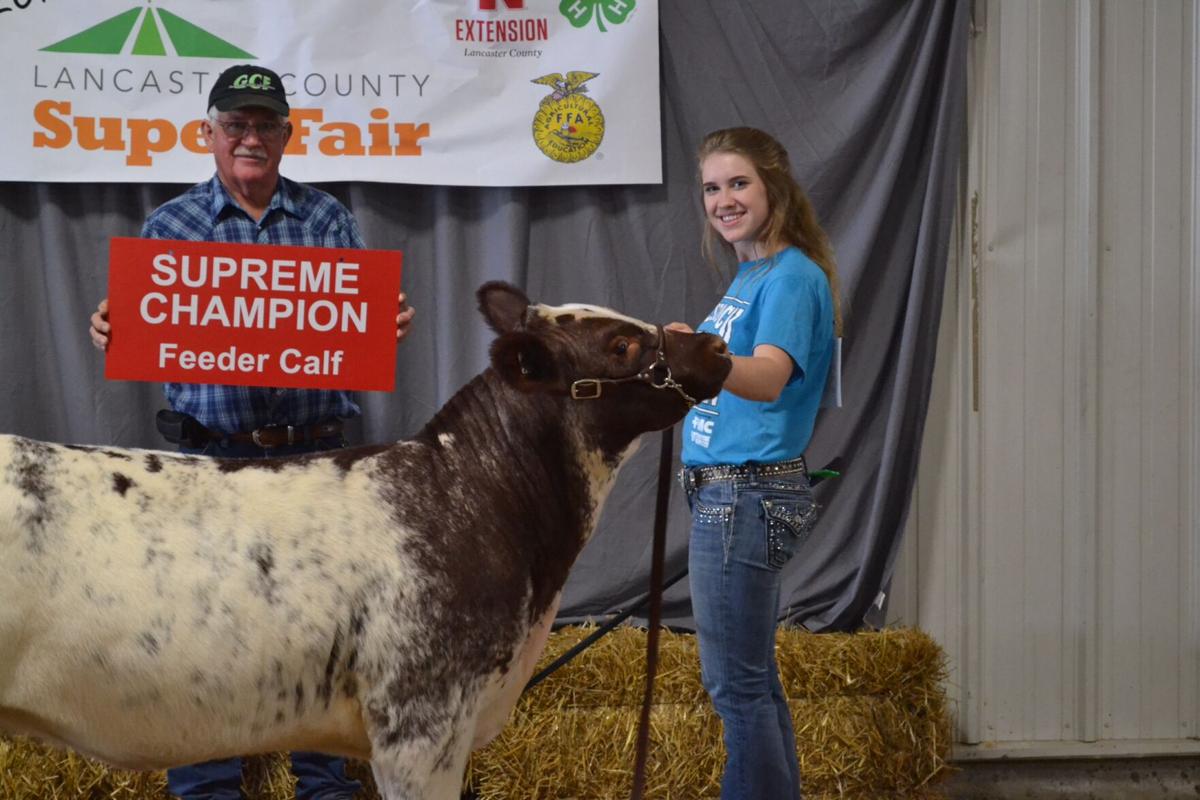 Madysen Cox shows the Shorthorn that won her Supreme Champion Feeder Calf at a previous Lancaster County Fair. Holding the sign is her mentor and friend, Greg Crawford. 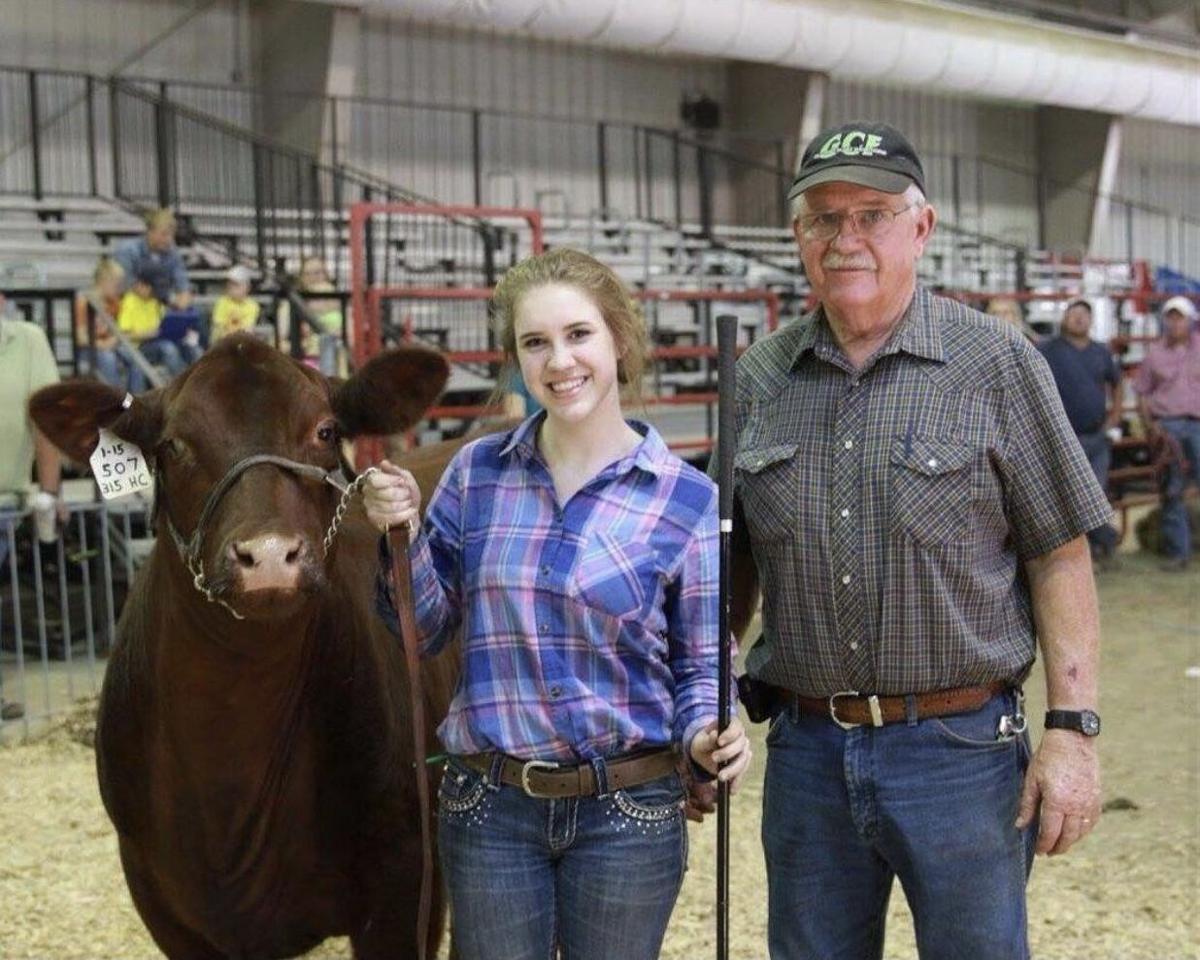 Madysen Cox and Greg Crawford pose with one of the Shorthorns Madysen has shown over the years. Crawford of Roca, Neb., got Madysen started in the show cattle business, and now she is pursuing a degree in livestock management. 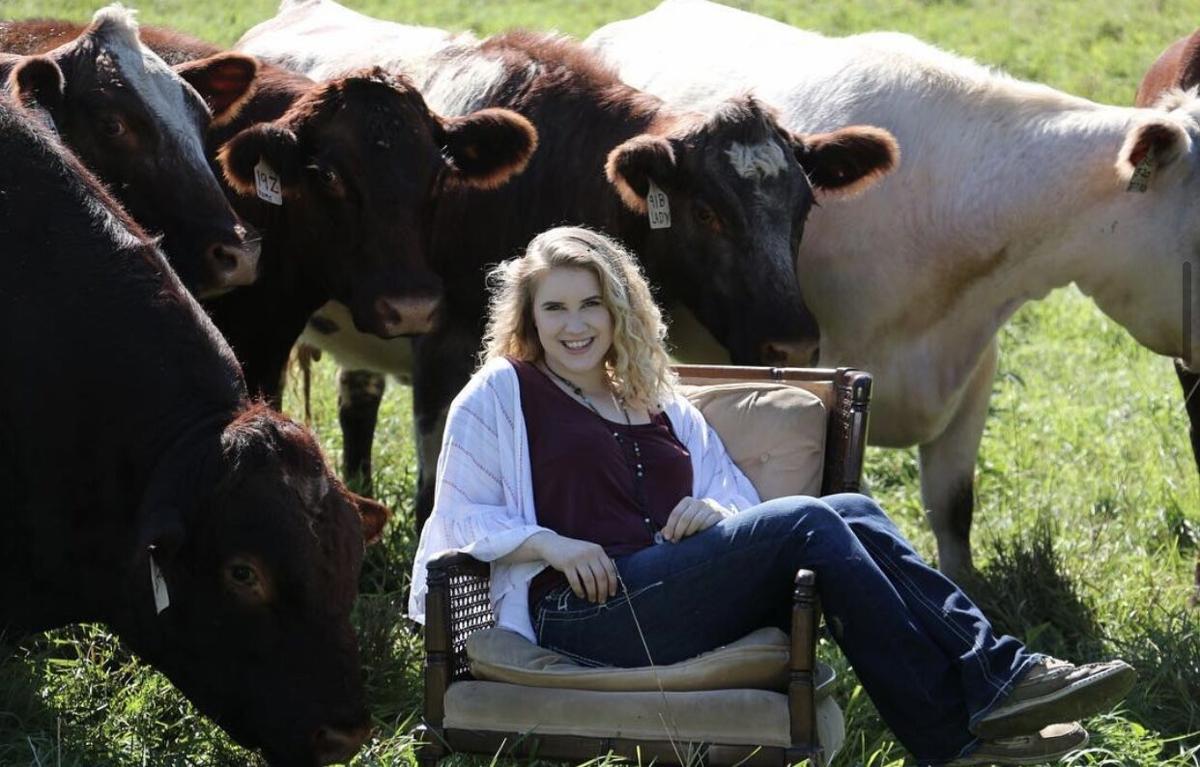 Madysen Cox poses in front of Shorthorns for her senior picture. The Bennet, Neb. woman graduated from Palmyra High School in 2019 and now attends Southeast Community College in Beatrice. She will graduate in the fall of 2021 with a degree in livestock management.