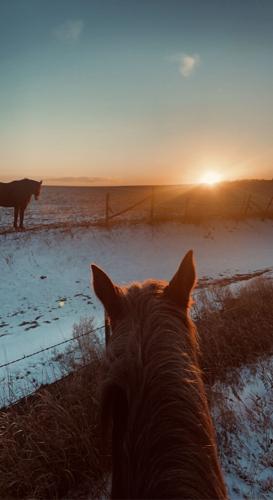 The Brichacek horses were happy when temperatures warmed and they didn’t have to be bundled up in blankets anymore. 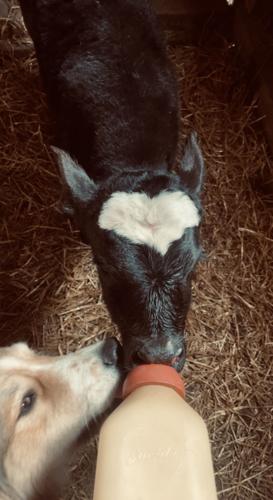 One new calf at the Brichacek farm was having a hard time getting enough milk from mom. On the bottle, he is growing and getting stronger.

“Ahoj” from Brichacek Farms. I hope you all had a very merry Christmas and great start to the New Year! Most of all, I hope you all were able to make it through the terrible cold front that hung around for way too long last week.

I was lucky enough to get home from work earlier on that Wednesday before the snow and cold were supposed to hit us. I’m grateful for that because the following three days took a toll on all of us. In those few days, there were more pipes and tanks frozen than not. When I turned on a faucet or checked a tank, I had no expectations for running water.

We thought we were prepared, but the cold temperatures beat us. The pipes in the house froze a few times but the biggest headache for us was a cattle waterer. The thermostat in this new water tank was faulty, so the boys installed a different thermostat the week prior. We were hoping that would prevent any issues, but we stood corrected.

The first morning of the negative temps created a water tank that was frozen so solid you couldn’t even chip away at it with a post pounder. We spent the next 24 hours with frozen fingers trying to figure out where the issue was. The entire motive behind getting this new water tank in before winter was to avoid this exact issue! It made me wonder how our previous 20-year-old waterer, would have weathered the storm.

To our astonishment, the pipes way underneath the tank, in the ground were frozen solid. Another reality check for us just how cold it got when the sun went down that first night. The boys were able to hook up a heater and get it thawed. Not sure who was happier when the water started flowing in that trough again, us or that one pen of cattle.

I tried to keep the hens warm by bedding them down heavier, feeding them more and making sure the wind wasn’t able to creep into the coop. Unfortunately, I lost one hen. It was my last white leghorn. The remainder are Rhode Island reds. This particular hen was picked on quite a bit by the other hens, so she went into that week looking a bit weak. I’m anxious to get more laying hens this spring, especially with the price of eggs in the grocery store today.

The horses were ready for the temperatures to rise again as well. By night three of strapping weatherproof blankets on them, they were completely over them. They weren’t the only ones! I drug the blankets out on that final freezing night. They took one glance at me coming toward them, ready to bundle them up again, and took off with their heels in the air. We’re thankful that bitter stretch is in our rear-view mirror.

We have had a few more calves in the last few weeks! All pairs have been strong thus far besides one. We attempted to wean a previous calf earlier this year. The calf jumped back with his cow or broke fence to get back with his cow a few times. We finally got them separated but way later than when we had intended and when we should have. With that being said, we are experiencing the negative affects with that cow and her new calf. The cow has a pretty small bag and the calf struggles to get enough to eat from her. So, we are having to bottle feed him as well.

But he is growing and getting stronger. He seems to be gaining confidence around his cow to get the little milk that she does have. I just moved him to nurse from the bucket because 2 quarts from the bottle was not cutting it for him anymore.

Those bucket calves have a special place in my heart, and I sure have a difficult time not getting too attached! This one is already pulling on my heart strings. He follows me around and has a white marking on his face in the shape of a heart, so I am definitely being tested. But I am trying my best not to name this one because I know he will be a steer next year.

The ground has been refreshingly muddy the past few days. We woke up to a beautiful, white covered farm one morning this week. It didn’t hang around for long though as temperatures reached into the 40s this week. Feels like forever since we have had to maneuver around in the mud!

Wishing the best year upon all of you. I hope 2023 is full of many happy moments, people that make you feel loved, and places that feel like home. I praise God because I know I will be able to find that right here on this farm. I will never be able to thank the Lord enough for this farm and this family. Until next time! “Spanem Bohem!"

When a bucket calf becomes a true friend

"I lost count how many bucket calves I have raised in my life. Each one stole my heart and made me grow a greater love for cattle, this indust…

Today I’m thankful for extra boots on the ground. Extra boots are symbolic of all the friends and family that surrounded us with our daughter …

"I’ve been trying to stay positive, using words like “moisture,” but in reality I think we’re all getting tired of busting through the snow an…

The Brichacek horses were happy when temperatures warmed and they didn’t have to be bundled up in blankets anymore.

One new calf at the Brichacek farm was having a hard time getting enough milk from mom. On the bottle, he is growing and getting stronger.

We buy one piece or entire far