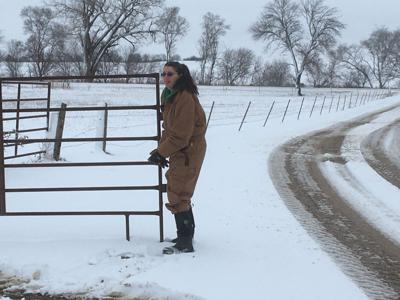 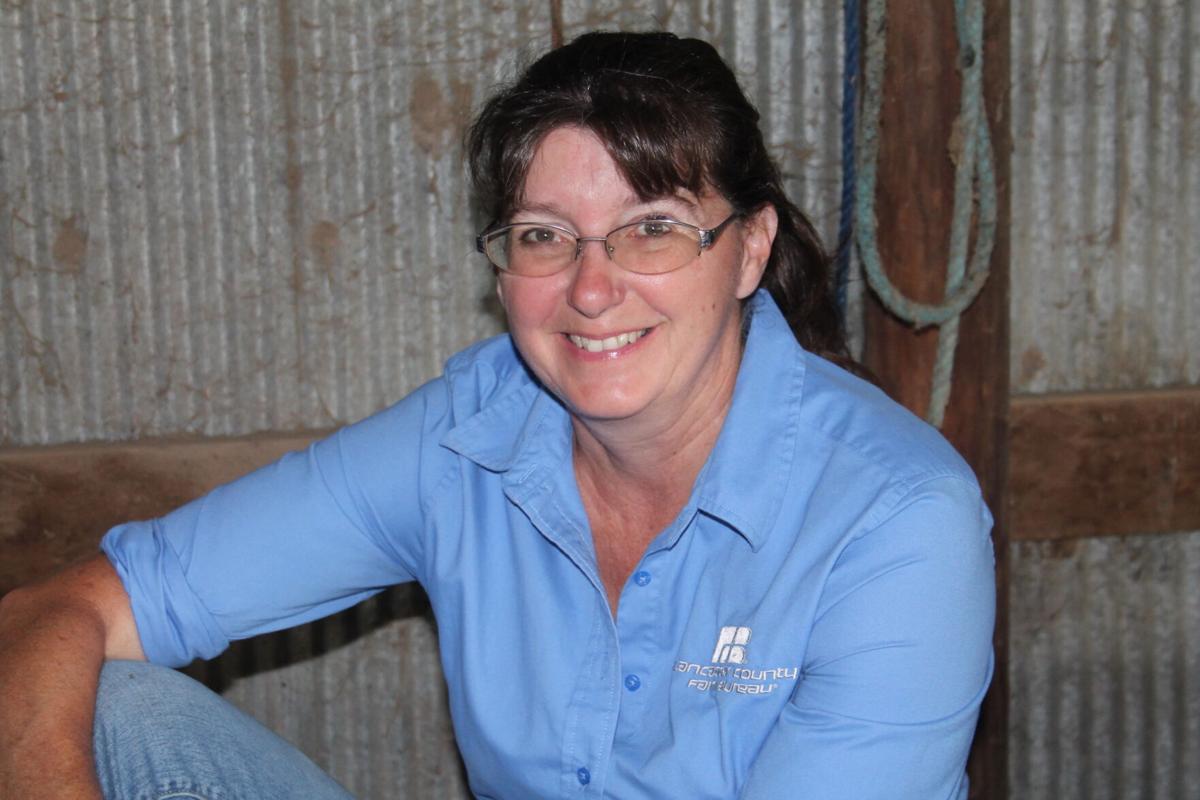 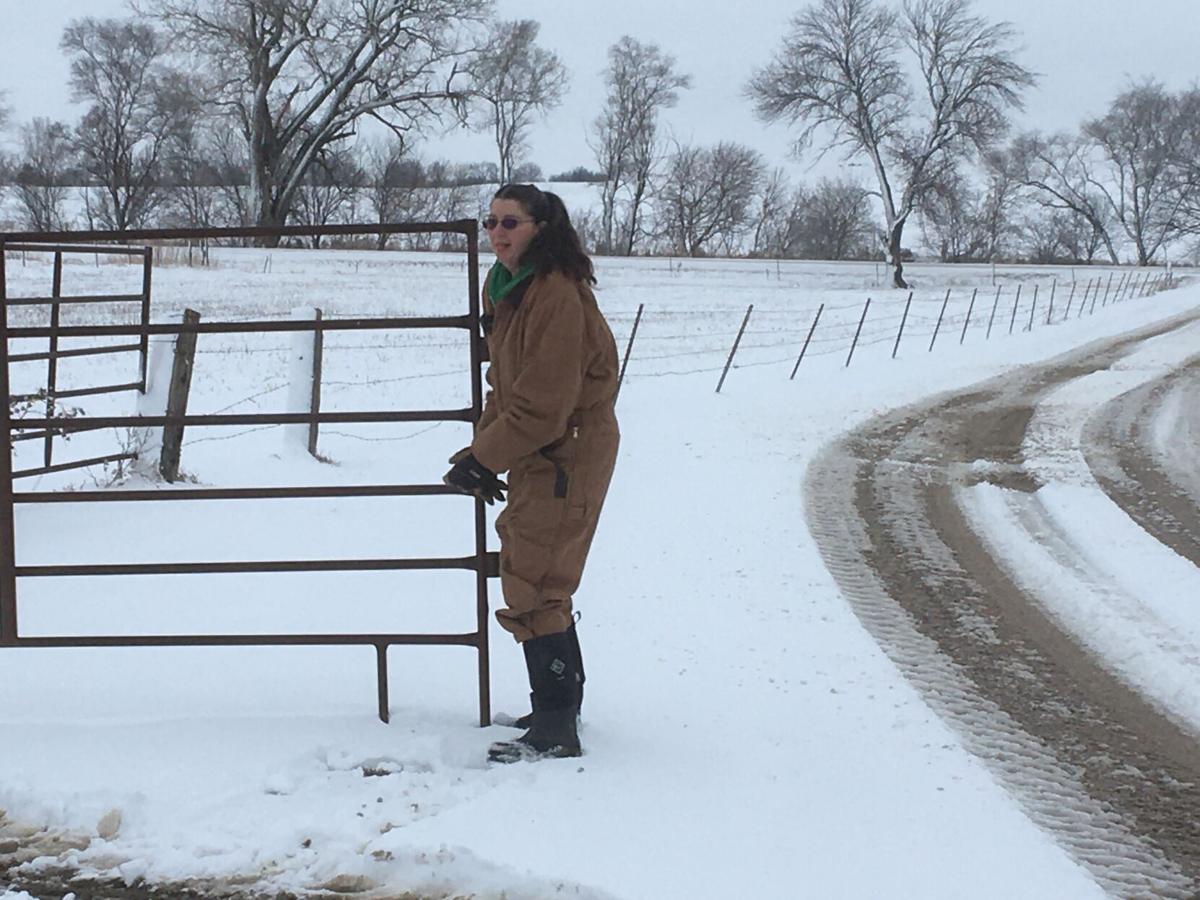 Paula Peterson moves a fence gate. “On our farm we have manual gate openers,” she said jokingly. 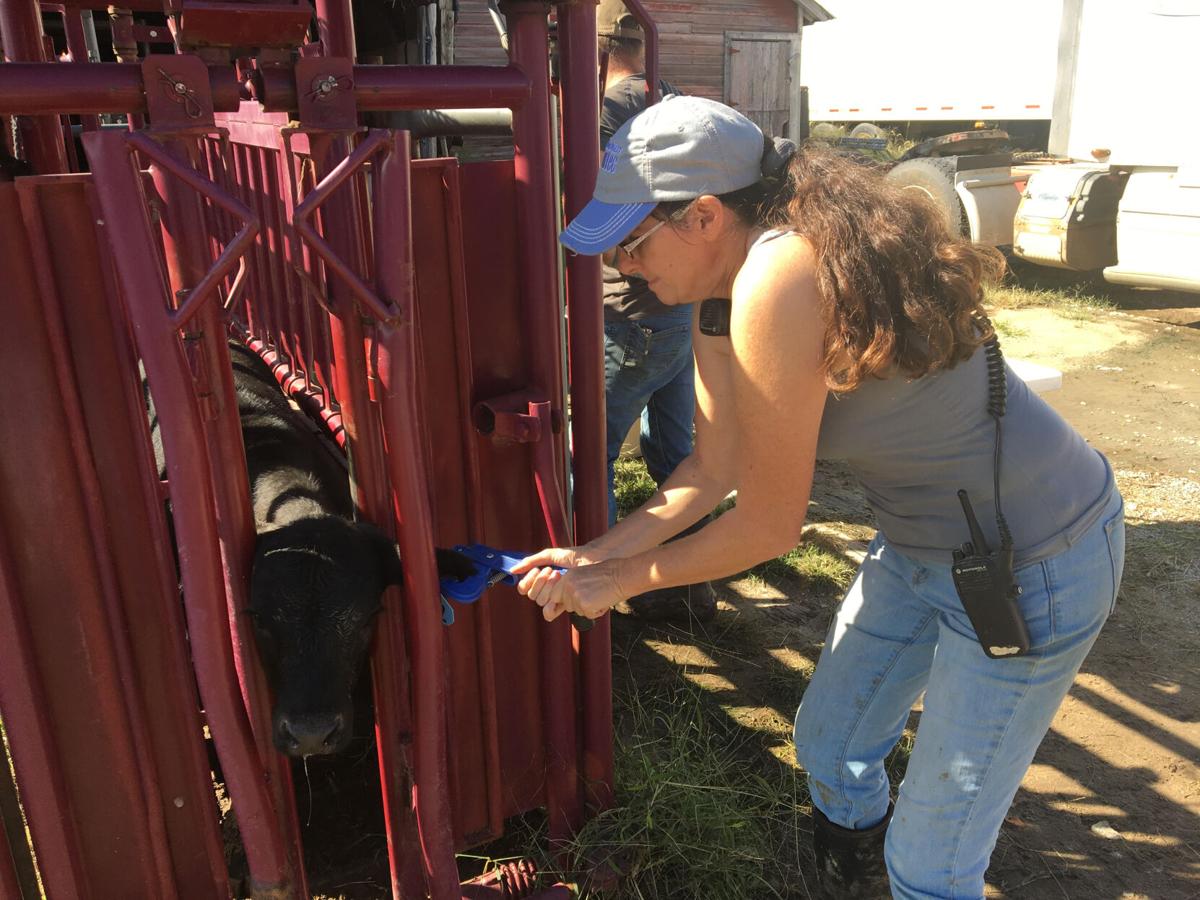 As the expression goes, there’s no substitute for enthusiasm, and the newest Producer Progress Reporter for Midwest Messenger is bubbling over with plenty of it.

Paula Peterson is excited to join the team and report bi-weekly about what’s happening on her family farm in Waverly, Nebraska, northeast of Lincoln, where she’s lived for 34 years. She jumped at the opportunity to contribute.

“I love sharing our story of our farm, I will literally talk to anyone about what we happen to be doing on the farm, even in line at Walmart,” Peterson said.

She will share her first report in the Jan. 8 edition of the Messenger and report every other week over the coming year.

The fifth generation Nebraska farmer lives on the family farm with her husband Tom. They raised two daughters, Amanda and Erica, who are both married and in their own homes now. Amanda is in Waverly and Erica is in Duncan.

The Petersons grow corn, soybeans and wheat and have a cow-calf operation.

Peterson’s zest for livestock and agriculture took a fascinating turn when she starting talking with Nebraska Secretary of State Bob Evnen about having the Peterson farm become a stop for international and national visitors who want to visit a working farm.

Peterson recently completed a two-year program with the Nebraska LEAD, Leadership, Education, Action, Development. She took the opportunity to visit farms in Costa Rica and Brazil, and decided she wanted her farm to be the one people come see in Nebraska.

“I was so impressed with what they’re doing throughout Nebraska and really want to be a stop for others who want to learn about what Nebraska has to offer,” said Peterson, who was also recently appointed chairwoman of the Nebraska Farm Bureau’s Promotion and Education Committee.

The Petersons enjoyed being a host family for the International Foreign Youth Exchange for two years. Paula is also active in the Ag in the Classroom program through the Nebraska Farm Bureau, and her family has been inviting people to their farm for many years.

“We have had visitors from Greece, England, Germany, Italy, Taiwan and India, as well as classrooms from Waverly, Lincoln and Omaha, Nebraska,” she said.

Peterson is proud of their farm history. Her father, grandpa, great-grandpa and great-great-grandpa all farmed in southeastern Nebraska’s Pawnee County. Meanwhile, her husband is a third generation Nebraska farmer who has lived within a five-mile circle of their current home his entire life.

The Petersons farm with his uncle. Their daughters come out to help where they can and so does their grandson, Christian.

“What 13 year old boy doesn’t want to get to drive a tractor?” Peterson said.

Their cow-calf operation is commercial Angus except for one lone Charolais cow. Their oldest daughter showed an Angus/Carolais cow named Cuddles through her entire 4-H and FFA years. Their younger daughter showed cattle, hogs, dairy and guinea pigs.

Peterson’s main hobby now is helping rebuild and tracking down history for the Waverly FFA program, recounting a history that was lost a few years ago.

“I’ve had a tremendous response from the community, including past advisers,” she said. “I have items that go back to 1931 now and up until 2010, and I’m still building.”

Following Peterson’s reports, readers will get hear her stories of fostering bottle lambs for fun. Their younger daughter raised sheep for FFA, and now that she no longer does, Peterson cares for bottle lambs and takes them to schools. She also is quick to help raise her neighbors’ bottle lambs.

Taking time to share joy on the farm, comes easily for Peterson.

“It’s important that people understand how much care farmers take with their livestock and land,” she said.

Agriculture runs rich with tradition and so do the Holidays.

Our youth producer gives her final report for the Messenger! Thanks for sharing, Mekenna!

Greetings fellow ranchers and farmers from Central Dickinson County, Abilene, Kansas! Happy New Year’s! I hope that you and your family had a …

Paula Peterson moves a fence gate. “On our farm we have manual gate openers,” she said jokingly. 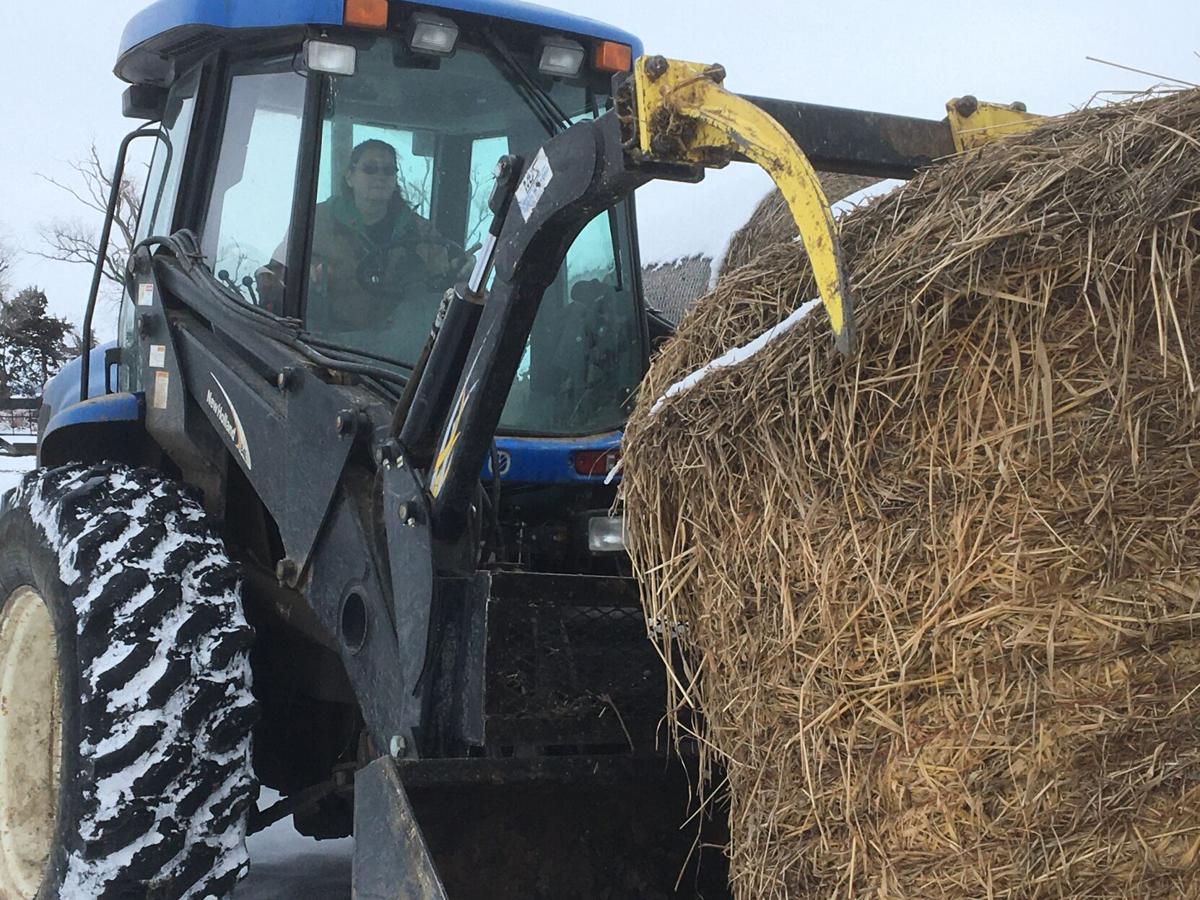 Paula Peterson gets a bale ready to be ground for feed at her Waverly, Neb., farm. 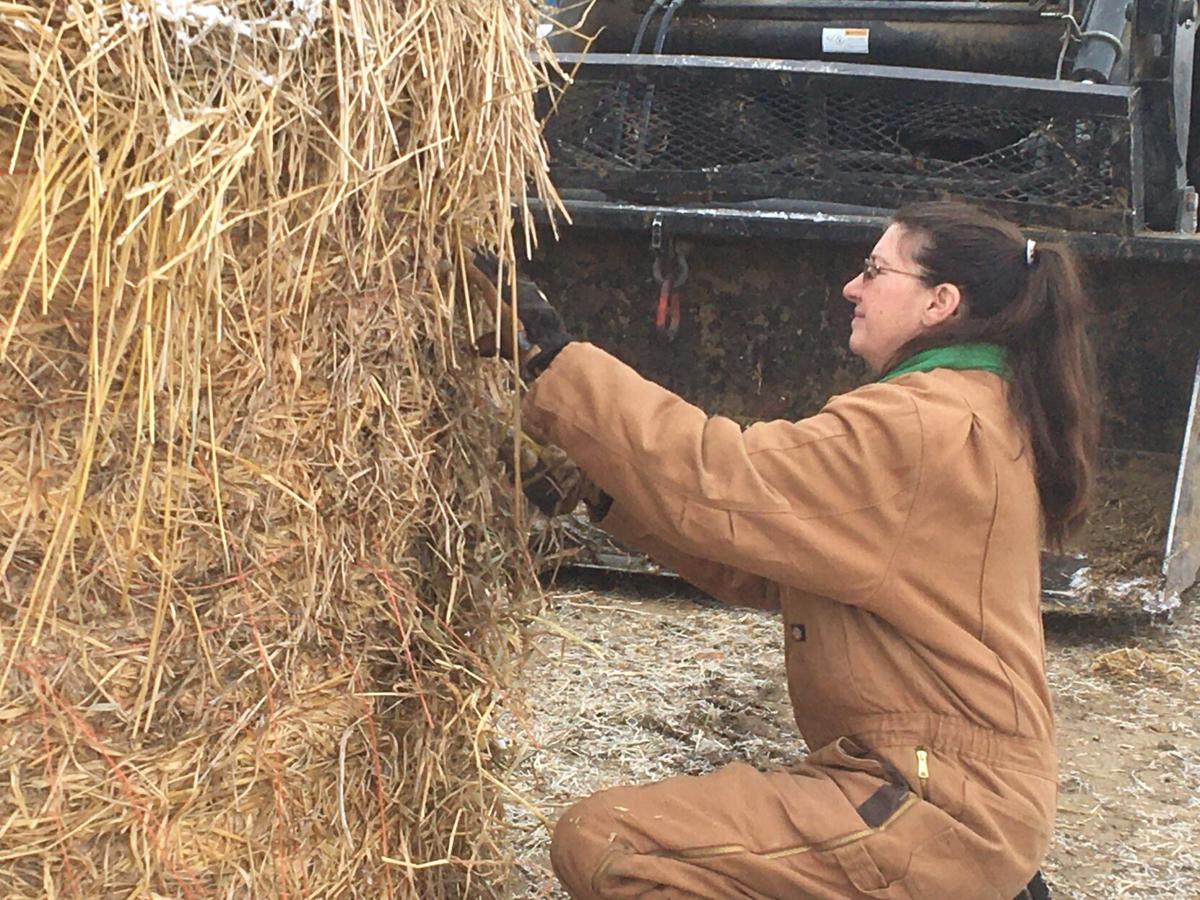 Paula Peterson prepares a bale for feed. The Petersons provide a mixture of grass and alfalfa bales for their cattle. 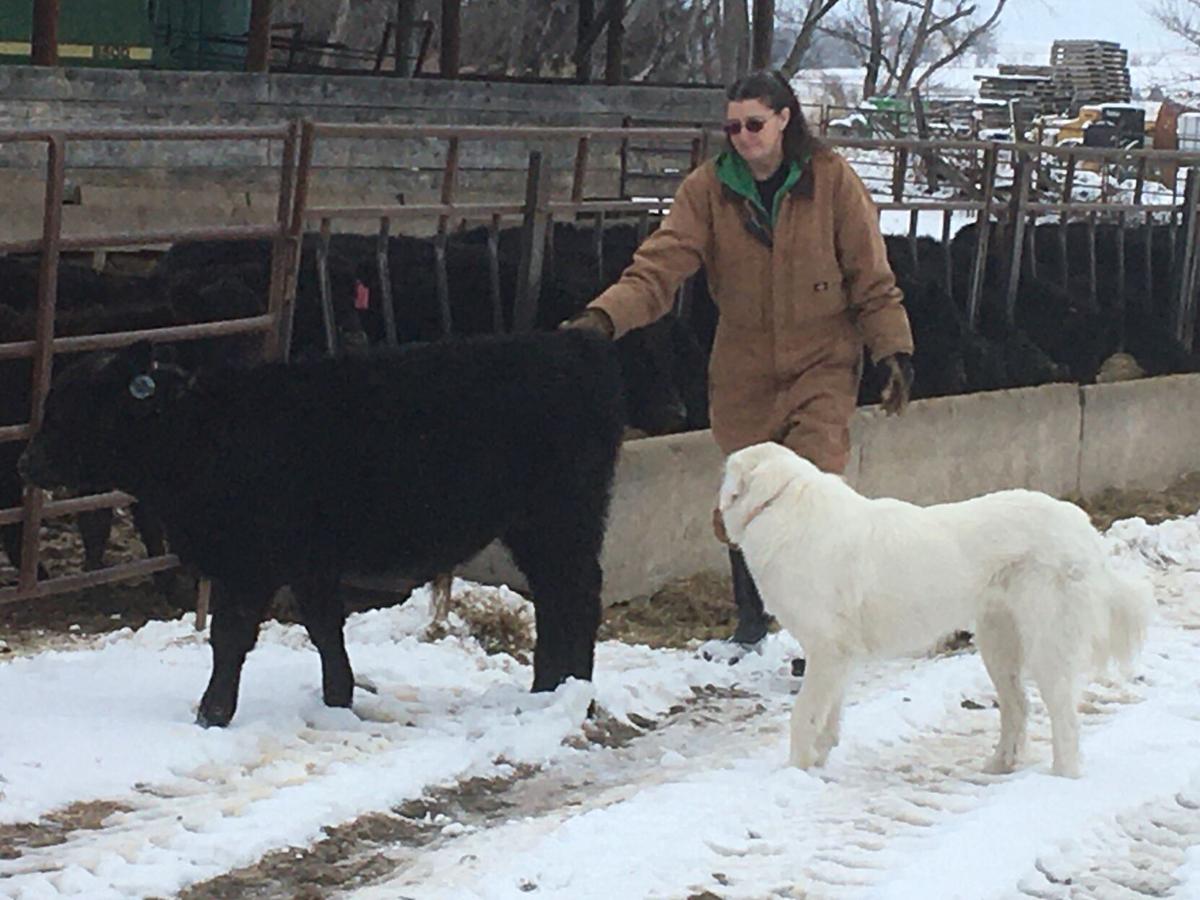 Paula Peterson and her dog guide a calf back to the pen. “Somedays it takes a gentle reminder that calves need to be inside the fence to eat,” she said. 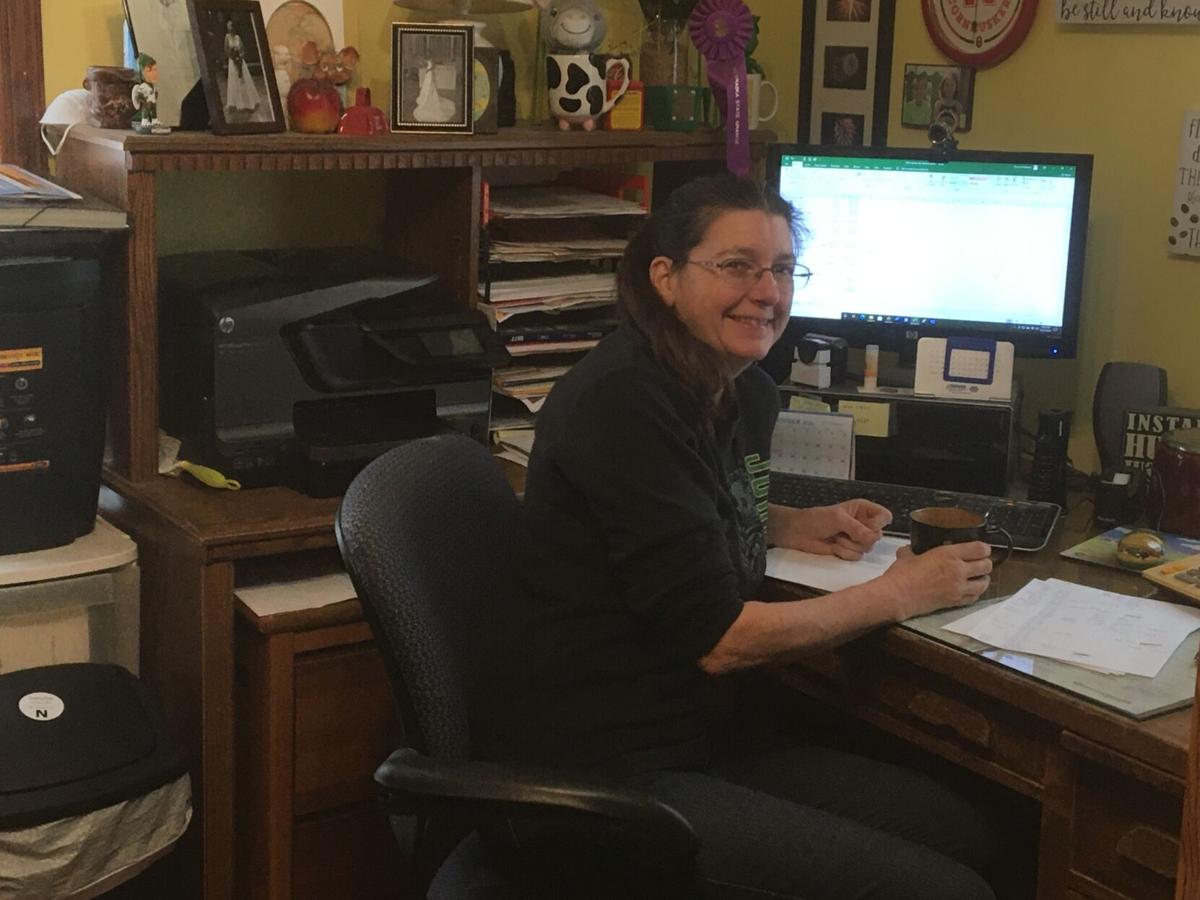 “A day in the office when it is cold outside is always a good day,” Paula Peterson said.