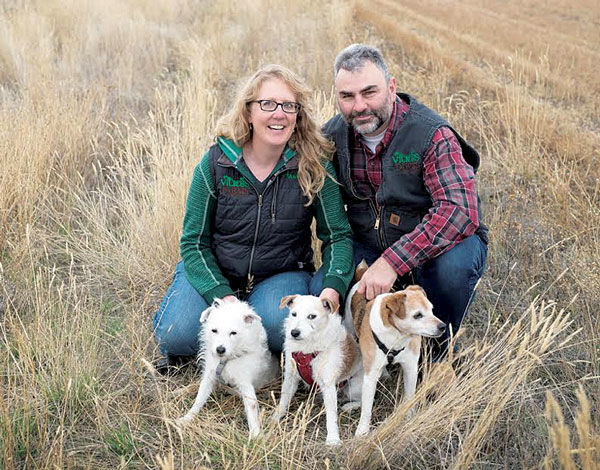 Anna and Doug Crabtree operate an all-organic farm near Havre, Mont., called Vilicus Farms.’ Here they are with their three Jack Russell Terriers. 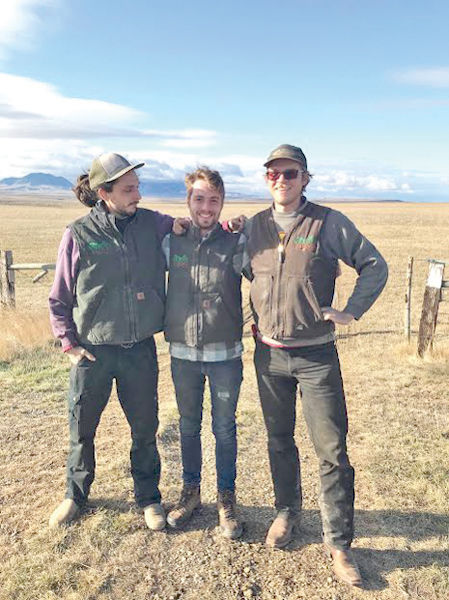 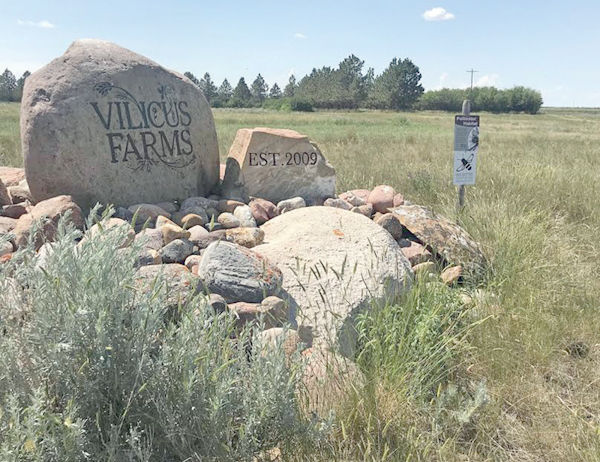 Vilicus Farms, established in 2009, is located in Hill County in north central Montana. Here is the sign with their Bee Certification.

Anna and Doug Crabtree operate an all-organic farm near Havre, Mont., called Vilicus Farms.’ Here they are with their three Jack Russell Terriers.

Vilicus Farms, established in 2009, is located in Hill County in north central Montana. Here is the sign with their Bee Certification.

HAVRE, Mont. — There is more to Doug and Anna Jones-Crabtree’s organic dryland operation than meets the “eye candy” — as Anna calls photos of their farm in north central Montana.

Vilicus Farms is certainly “eye candy” in the summer with strips of conservation plantings, attracting native bees and pollinators, growing next to strips of heirloom small grains, pulses and oilseeds — all part of the more than 9,600 acres on the farm.

“We strive to be good stewards of the land,” Anna said. “We grow an array of organic heirloom and specialty grain, pulse, oilseed and broadleaf crops under five- and seven-year rotations with integrated cover cropping — and with that kind of diversity, we are always building good soil and attracting pollinators.”

In fact, with 26 percent of their farm in non-crop conservation plantings and 400 acres seeded to native pollinator habitat, Vilicus Farms, “Vilicus” being the Latin translation for “steward of the land,” became Bee Better certified in 2019.

Providing food for an active soil is important to ensure the farm remains sustainable for generations to come, and it provides nutritious grains for cash crops and builds organic matter, which increases each year.

This growing season, Anna and Doug have agreed to let The Prairie Star follow along with their operation as they newly incorporate livestock into their cropping system.

“Two new agrarian (farming) enterprises are currently under incubation at Vilicus Farms: a grazing operation integrated into the cropping system and a seed cleaning operation to retain value on the farm,” Anna said.

In building their farm through the years, the Crabtrees believe in sharing their knowledge about organics and farming with others. They have been working side-by-side with interns and other students who come to learn about organic farming and work on the farm.

“Since 2013, we have offered the only structured organic grain farming apprenticeship in the U.S. with the vision of incubating new organic agricultural enterprises,” she said. “The couple has hosted 11 apprentices, many interns and ‘farm campers.’”

In addition, they have given several presentations about their farm to different interested groups.

Prior to launching the farm, Doug managed the State of Montana’s Organic Certification Program. He has also worked as an organic inspector, agricultural researcher and farm manager.

Anna is a Donella Meadows Leadership fellow and a recipient of the White House Greening Government Sustainability Hero award. She earned a doctorate in civil and environmental engineering with a minor in sustainable systems from Georgia Institute of Technology.

In addition, Anna served on the USDA Secretary’s Advisory Council for Beginning Farmers and Ranchers. She currently serves on the Xerces Society Bee Better Advisory Board and is on the Iroquois Valley Farmland REIT’s Investment committee.

Vilicus Farms is a first-generation farm. After Doug’s family lost their farm in Ohio in the 1980s during the farm crisis, he went into engineering, but still wanted to farm. Anna’s relatives had farms in the Midwest and she grew up in a rural agricultural community in Washington, so staying close to the land was important to her.

Doug had several arrangements working with other farmers while in college, as well as after he graduated. He has worked as a professional farm manager and ag systems researcher in several states.

Anna pursued her engineering career and provided stable income and health insurance while they continued to look for the right opportunity to farm.

“After working on several land link opportunities, nothing seemed to fit,” Anna said. “We both worked in Helena to raise the funds needed for a farm, while actively looking for the right opportunity to start our own farm.”

In 2009, they were able to start their own organic farm, Vilicus Farms north of Havre in Hill County.

While Vilicus Farms won’t have any new apprentices this year, the Crabtrees will be hosting three short-term interns, who may become apprentices in future years. They are coming from New York, Connecticut, and California.

“Our vision has been incubating new organic agricultural enterprises,” she added.

In addition, a U.S. Navy veteran will be coming to Vilicus Farms on a short-term work agreement for the seeding season. He is a candidate for the State Department of Labor registered apprenticeship, and will be able to use his veteran benefits to pursue this additional training.

Currently, they have a full-time agrarian/farmer, Ben Clark, who was an apprentice last year.

“Ben wanted to stay with us longer-term and has become our logistics, maintenance and social media specialist,” she said. “He will be building a tiny house, which would be a prototype that could support our need for more housing on the farm.”

Ben will be giving farm reports as the growing season goes on.

Ben worked on farms in his home state of Massachusetts for five years, raising everything from laying hens, grass fed beef and dairy cows, pastured pork and poultry, as well as fruits and vegetables.

“I learned that there is nothing I enjoy more than a good meal after a long day working outdoors and with the land,” Ben said. “Agriculture was the only career that made sense and aligned with my values of sustainable living.”

In addition, the Vilicus team now has a full-time agrarian foreman, Paul Neubauer, who came to Vilicus Farms last year after apprenticing on a ranch in Colorado.

Paul was born and raised in Buffalo, New York, living in the city. He graduated from Warren Wilson College in Asheville, North Carolina. During college, he worked for a farm crew that cared for the farm on the college, raising cattle, hogs and poultry, as well as growing crops.

“From that experience, I became hooked on working on the land, growing healthy food for myself, my friends and neighbors,” Paul said.

Paul will be incorporating grazing into the crop rotation and will talk about that with readers in upcoming reports.

“Without cattle grazing, we need to manage soil health through intensive crop rotation and intentional biodiversity, but with grazing, we will be able to add to that soil health management with the benefits of manure, urine, and the cattle’s hoof action,” he said.

Anna said they were looking forward to “cows showing up this year.”

“This is going to add to our already deep soil building program. It will enable additional economic value for the farm and it will get Paul launched into his own enterprise,” Anna said.

The farm crew was already in the field during the week ending April 24.

“We are finally getting in the field after an unusually late spring with several April snow showers that delayed the fields from drying,” Ben said.

Vilicus Farms begins planting season with a pre-seeding tillage program to prepare the fields to be seeded.

“We are lightly discing some fields with our K-Line High Performance Speed Tiller, which sheds residue at speeds more than 10 mph, ensuring uniform distribution of residue, with shallow disturbance,” he said.

In some fields, they use a chisel plow that is attached to a “coil packer,” which are steel coils that roll along the soil and leave a nice even soil surface.

After soil preparation, they will begin seeding green manure with legume and forage mixes and cash crops.

In the next report, Ben will discuss seeding the green manures and cash crops.

“For now, the daily mantra is to keep moving with the tillage and seeding, with tractors constantly rolling across the fields. We have a short window to do pre-tillage and seed,” Ben concluded.