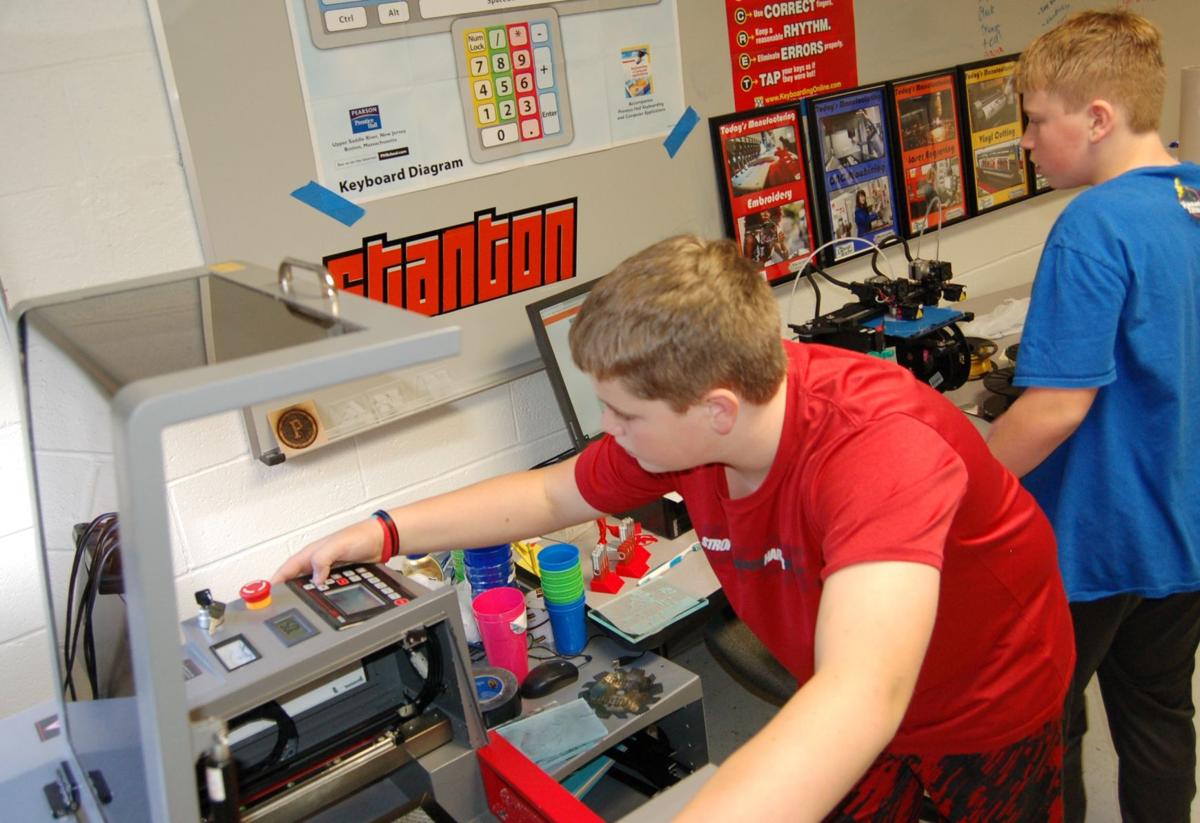 Seventh grader Ren Brown sets up a piece for the laser printer. 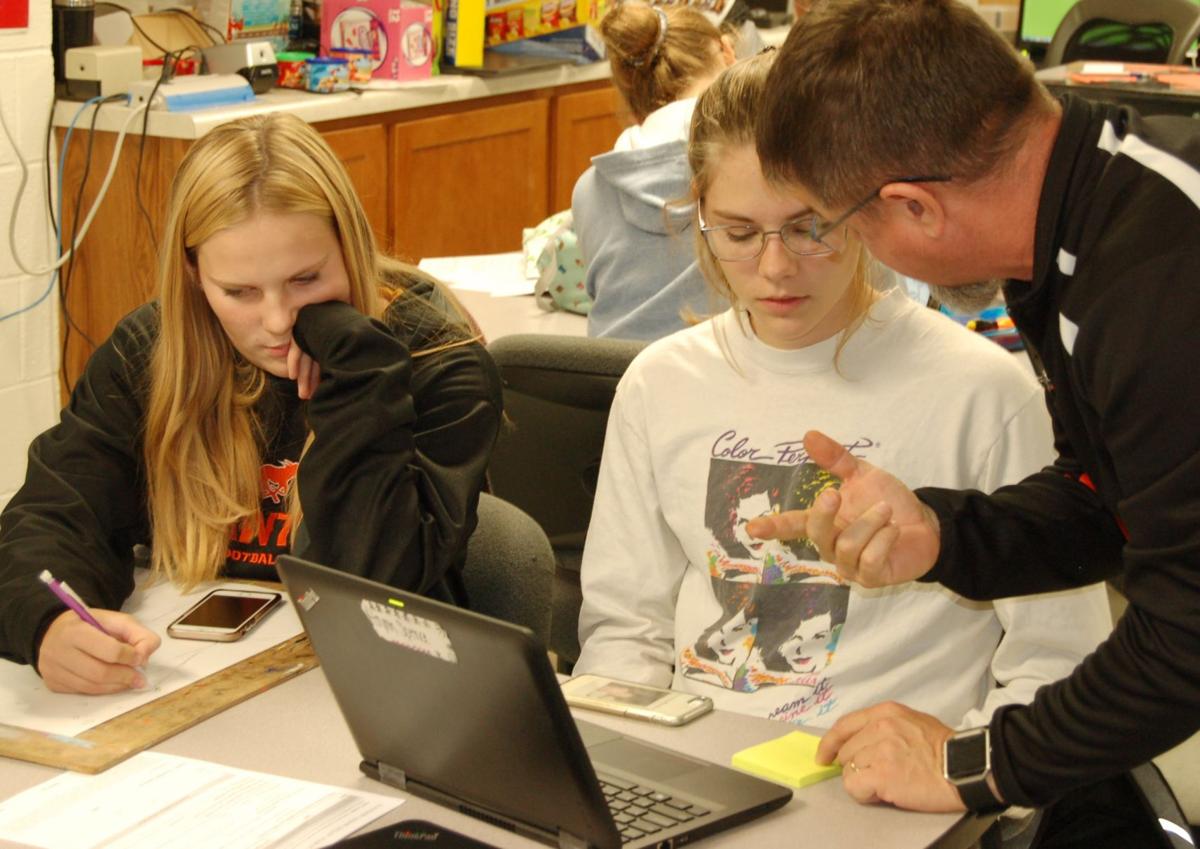 Seventh grader Ren Brown sets up a piece for the laser printer.

Nebraska farmers have helped six Nebraska school districts grow their capacity for education in the fields of science, technology, engineering and math.

Thanks to the America’s Farmers Grow Rural Education program, sponsored by the Bayer Fund, farmers from across the state were able to nominate rural public schools in their community to compete for STEM grants in the amount of $10,000 or $25,000.

An earlier grant helped the district set up a kitchen that’s used by the life skills class as well as a food labs class, special education, and Spanish students use it to explore regional cuisine.

Subsequent grants gave the maker space a more technological aspect with the purchase of a computer numeric control router and carver, a vinyl router, a few 3D printers, a couple of embroidery machines as well as drafting and design software and laptop computers.

Karla Renn, the marketing teacher and Future Business Leaders of America (FBLA) sponsor, said her students have used it to create items to sell for fundraising. They have embroiders hats, blankets and lanyards and laser engraved metal cups and thermoses with the school’s logo.

“The students learn marketing techniques from the sales while earning the funds to support the school and purchase more material.” Renn said. “It is self-sustaining.”

One of the students’ favorite classes is Rick Spotanski’s, technology class. Pupils from seventh grade up to seniors crowd into his room to use the various machines and craft creations.

It’s an informal system, but it taps into the imagination, principal Dr. David Cunningham said. That makes it like camouflage for teaching.

“They wind up using multiple disciplines to make things,” he said. “They are using basic math skills, language and art — even geometry.”

Most students start at the vinyl router — the easiest and quickest to learn. They can use up to six colors to make stickers on the machine. The more colors the more delicate the work, though.

Seventh grader Kaedence Louthan, made a Midwest Messenger vinyl sticker. Being a three-layer design, it was delicate work requiring patience and attention to detail. Louthan said she liked detail-oriented work since she plans to be an EMT like her mother.

“Kids take an interest in different machines at different levels,” Spotanski said. “We had one special education student who made fences for his farm animals on the 3D printer; another student made stickers on the vinyl machine, then made a box on the 3D printer to store them.”

The 3D printer is another popular machine. The school acquired two refurbished industrial-style printers instead of the comparably-priced home printer.

“The industrial printer is sturdier. It is also easier to fix,” said Spotanski, who is also the school’s technology coordinator.

On the other end of the gadget gamut is the Boss LS1416 laser engraver. It houses a 50-watt CO2 laser tube that can etch wood, acrylic blocks, glass, stone and even metal. Stanton just purchased a Boss LS1630. This big laser printer uses a 65-watt to 100-watt CO2 laser tube and can handle much larger engraving jobs.

“The plan is to keep adding to the maker space,” Cunningham said. “Our students have shown there is no limit to what our students can accomplish if we can give them the opportunity and the means.”

Teachers draw up proposals with specific information on how the money would be spent. Local farmers get to weigh in on the projects, then the project goes to the America’s Farmers Grow Rural Education Advisory Council, a group of about 30 farmers from across the country. The council ultimately determines which schools get the funding.

One of the council members is Royce Schaneman, executive director of the Nebraska Wheat Board. He reviews about 30 to 40 applicants, and finds the different project quite interesting, he said.

Falls City Public Schools earned a $25,000 grant for its “Soaring to New Heights in STEM” project.

“The overall focus of our grant project is for all K-12 students in our district to use drones and drone technology, and to gain transferable STEM skills,” superintendent Tim Heckenlively said. “Our district is committed to project-based, real world teaching and learning and to enhancing our partnerships with the local community so that our curriculum meets local and statewide needs.”

Another upside to the drone program is increased enrollment in more STEM-related courses in high school, and students get excited about STEM while exploring drones.

“Younger students will focus on more fundamental aspects using hands-on activities while older students build, fly and apply technology to solve real-world problems in all aspects of agriculture,” Heckenlively said. “Through our relationship with the University of Nebraska Extension, agents will bring STEM learning activities and resources to K-12 students weekly.”

To realize these goals, the project will integrate STEM into current activities, he said. For example, students will learn to code with Legos, Ozobots and Spheroids. The project will also support the Makerspace at the intermediate elementary school.

Banner County Public Schools earned a $10,000 grant for its “Drone Tech for Ag” project. This project was already underway when the district received the award, algebra teacher Nancy Olsen said.

“Our focus presently is learning how drones work,” she said. “We have a kit from PCSedventures that we used to build drones, learn what the parts are and how they work together to make the drones fly and take pictures.”

The students are also working on the ethics of drone flying, learning what the laws and regulations are with drones. They practice their flying skills with small inside drones and computer simulations. Once they are comfortable with the controls, the students will take the drones they built outside.

“Next year we plan to team up with the FFA group to purchase drones that are programmable, to obtain information on soils, crops and livestock,” Olsen said.

“We will continue to add funding projects to complete the program,” Ruhl said. “We are focused on moving the welding lab from a one stall garage-style area to a shop bay.”

“The program is developing students to step into the workforce,” he said.

Axtell Community Schools earned a $25,000 grant to establish an FFA greenhouse. They plan to erect a 30-foot by 40-foot structure.

“The greenhouse will be used to expand educational opportunities for students,” said Katie Grimes, agriculture educator and FFA advisor. “In addition we are hoping to do an annual plant sale in the spring as a fundraiser for our FFA chapter. The plants sold will be grown and cared for by the students.”

Grimes said they are hoping to have the greenhouse up and running by the start of the next school year.

Bruning-Davenport Unified earned a $10,000 grant for its Vernier Science Ag project. The project was yet to get underway but high school science teacher Aaron Peterson said the materials are on the way.

Questions about the program can be emailed to AFGREQuestions@Monsanto.com.