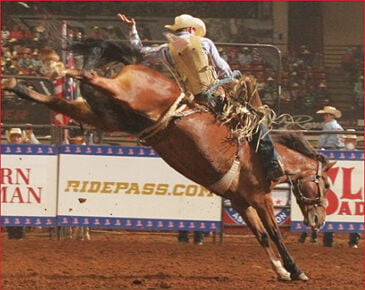 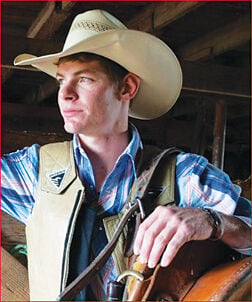 “I got bucked off a lot; landing upside down makes a hard head, costly, too, with all the crushed hats.”

Still, the school-of-hard-knocks has paid off, according to Cable Wareham, who turns 19 years old this week.

“Every time I’d hit the ground, I got back on more determined I could ride broncs,” Wareham said.

Mindset and dedication have paid big dividends as Wareham, son of Rob and Heldi Wareham of Whiting, Kansas, is officially the best high school saddle bronc rider in the country.

Placing in every go-round, Wareham scored 216.5 points on three rides, while the runner-up had 197 points.

“I was happy to make qualified rides and really pleased to win the championship,” he said. “It was a big improvement over a year ago at the finals when I kept getting bucked off.”

Route to the title is especially significant to the cowboy, too.

“I marked a ‘63’ on my first horse and was offered a re-ride,” he remembered. “It was hard deciding whether I should keep my low score or try another bronc.

“Last year when I took a re-ride, I got bucked off at 7.8-seconds and lost all my points. But I knew the score on my first horse this year wouldn’t stand up in the average, so I took the re-ride.”

This time it paid off, moving him up to first in the go-round with 76.5 points. Marking 66 points, Wareham was eighth in the second go-round, and came back placing third in the short-go with 74 points.

All totaled, it made Wareham the highest scoring saddle bronc rider at the rodeo.

Wareham earned the opportunity to represent Kansas at the national competition by being the state champion saddle bronc rider.

Riding at eight Kansas high school rodeos in the 2019-2020 rodeo season, Wareham was the year-end highpoint saddle bronc rider. That was boosted by being his event winner at the Kansas High School Rodeo Finals in Lakin.

The Kansas high school saddle bronc riders all did well at the national rodeo. Ty Pope of Garnett, Kansas, was third overall with 196.5 points, and Weston Patterson, Waverly, Kansas, came in 12th with 130 points. Colton Potter of Grenola, Kansas, was 15th with 108 points.

“I travel to rodeos with Ty and Weston so that was really great for us all to compete together and place at the nationals,” Wareham said.

“Those six Kansas bronc riders making it to the short-go are top ranch hands, too,” said Rob Wareham, the champion’s dad. “They do ranch work on a regular basis; Colton Potter is a fulltime rancher.

“I mean, these teenagers are the kind of cowboys who can catch a cantankerous cow in the middle of a section by themselves on a three-year-old colt and get her on a trailer if need be. Cable and I have been to the pasture with all of them.”

“I’m really proud of how well Kansas cowboys did at the National High School Rodeo Finals,” Cable Wareham said. “With the top performance of the timed events cowboys, Kansas ended up second in the boys’ team standings.”

Ever since he got his first pony in kindergarten, Wareham has known he wanted to be a cowboy.

“I started breaking ponies to ride and didn’t even have a big horse of my own until I was in the fifth grade,” he said.

“I did day work on horseback for cattle owners in the area,” he said. “Between my dad and grandpa, we have about 300 momma cows that I help look after.”

The urge to ride bucking horses came naturally for the cowboy, who started riding saddled steers in junior high school.

“It was just in my blood,” Wareham contended. “I always liked colts that had a little buck in them. My uncle Marty Hebb was a champion saddle bronc rider and that rubbed off some, too.

“I’ve done calf roping and team roping, which are essential for a rancher. But I prefer the rough stock at rodeos.”

“I usually compete in three or four rodeos a week, top amateur competitions as well as professional rodeos,” he said.

His arena skills have earned him a rodeo scholarship to attend Fort Scott Community College.

“The coaches there are great for saddle bronc riding with top practice horses from Don Reno, Nowata, Oklahoma,” Wareham said.

College classes start this week as Wareham is majoring in ranch management.

“We’ll be in the classroom not computer lessons, and I’ll be busy working out for the rodeo team, too,” he said.

“Where I move forward in my college education depends on my rodeo successes and what’s offered to me,” he said. “I intend to continue competing in rodeos throughout my lifetime, hopefully qualifying for the National Finals Rodeo in Las Vegas.”

Despite his saddle bronc championships and qualifying on most of his mounts, Wareham remains humble.

“I try my best every time out, but it’s always possible to get bucked off. I’m still figuring it out,” Wareham said. “If you’re not pushing yourself to get better, there’s no reason to keep doing it.”

“I just love it,” Wareham said. “There’s no better feeling in the world.”

Frank J. Buchman is a writer and rancher located in the Kansas Flint Hills.