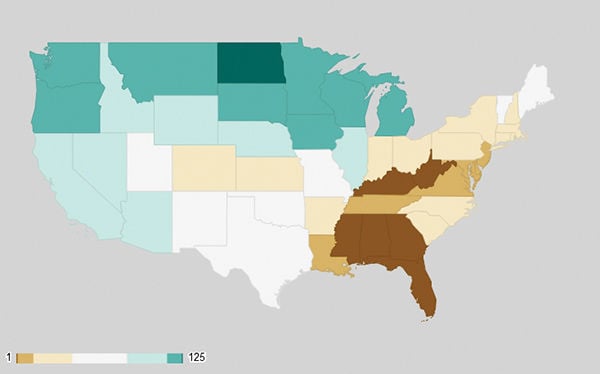 North Dakota, highlighted in turquoise, ranked as the only state breaking the 125-year precipitation record for the month of September 2019 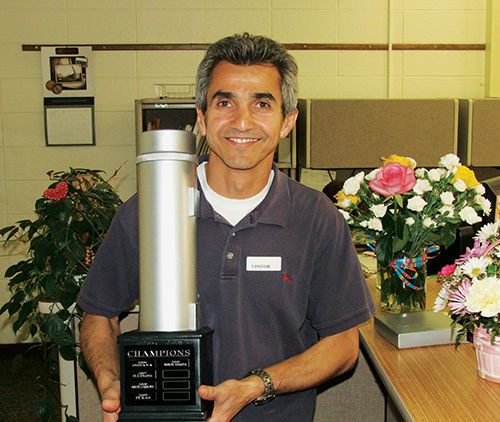 North Dakota, highlighted in turquoise, ranked as the only state breaking the 125-year precipitation record for the month of September 2019

March Madness isn’t just about basketball. Climatologists throughout the U.S. are immersed in CoCoRaHS March Madness, which has them recruiting volunteer rain and snow observers for the data-gathering program.

CoCoRaHS (pronounced coco-rozz) is an acronym for the Community Collaborative Rain, Hail and Snow Network. Although independent of the National Weather Service, the agency assists in sponsoring CoCoRaHS and uses the data daily. Observers take and report daily readings of precipitation, which helps forecast flood and drought potential.

CoCoRaHS was started by the Colorado Climate Center at Colorado State University, after the devastating Fort Collins, Colorado flood in 1997.

In the March Madness contest, the state climate center rounding up the most observers wins a traveling trophy.

North Dakota has held that trophy four different years — 2010, 2012, 2015 and 2018. As March rolled around this year, North Dakota Climatologist Dr. Adnan Akyüz was in high gear, hoping to win again. But it’s not just his competitive nature. CoCoRaHS plays an important role in collecting weather data, he said.

“CoCoRaHS is important especially in under-represented, rural areas,” he said. “It’s an excellent vehicle to get citizens involved in science.”

Volunteers are introduced to the tools of data collection and the variables involved with getting accurate measurements of precipitation.

Precipitation records were especially important in North Dakota over the last year, as 2019 was the state’s wettest year on record. The state recorded 24.3 inches for the year, averaged across all of its reporting stations. That beat the 2010 record by 0.9 inch, Akyuz said.

“Except for two counties in the north-central, the rest were very close to the record,” he said.

The Red River at Fargo had about a 95% chance of exceeding major flood stage this spring, according to the National Weather Service’s North Central River Forecast Center in early March. The chance for Grand Forks and Pembina is greater than 75 and 95%, respectively, Akyuz said.

“The flow of the Red River causes a unique sequence in which the spring thaw progresses northward, causing natural ice jams as the river flows into still-ice-covered surfaces,” Akyuz said.

The Red River Valley also has a unique topography whereby the valley slopes less than two inches per mile in places, which causes the river to meander in sharp loops.

“So, it’s vital to be ready for the 40-foot river stage and the 35-foot river stage in Fargo,” Akyuz said. “It’s more important than ever that we make accurate snow measurements which go into hydrologic models predicting flood stage.

“A great way to help is being part of the CoCoRaHS network. It only takes five minutes a day, and we provide training materials.”

In Kansas, there are more than 2,000 registered CoCoRaHS observers, but more volunteers are always needed. Having a large volunteer network can help record variable precipitation patterns. It can be raining on one side of the field, for example, but the other side won’t get a drop, explained Mary Knapp, assistant state climatologist at Kansas State University.

“Having an observer on every block or in every quarter section wouldn’t be too dense,” she said.

Nebraska uses NeRain — the Nebraska Rainfall Assessment and Information Network — which began as a rain assessment funded through an Environmental Trust grant. The program runs parallel to CoCoRaHS and has its own volunteer recruitment efforts.

“NeRain provides the resolution necessary to make assessments at the sub-county level,” he said.

To join a volunteer weather reporting network, contact the director in your state: