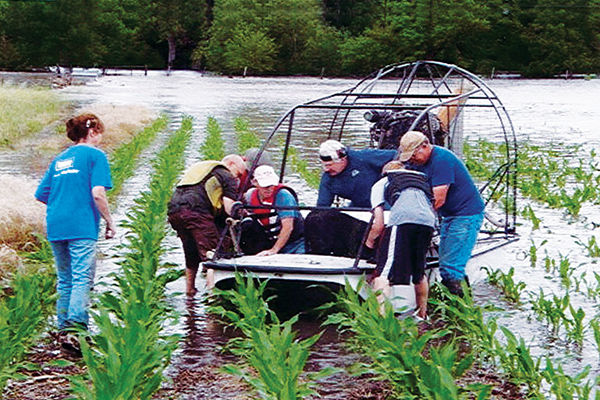 The Hansons attempted to save their calves in the 2010 flood via airboat. 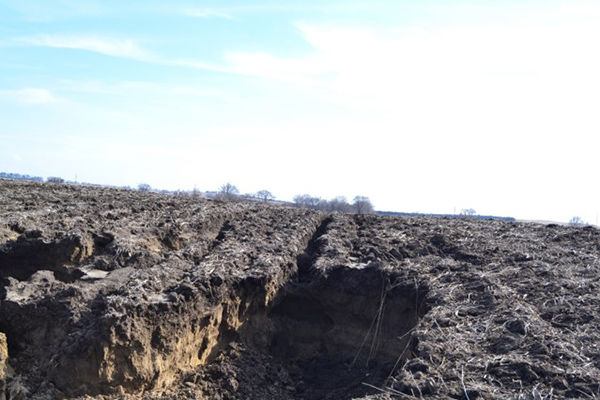 After the 2019 flood, the Hansons found substantial gaps and holes in their fields, one about as big as a dump truck. 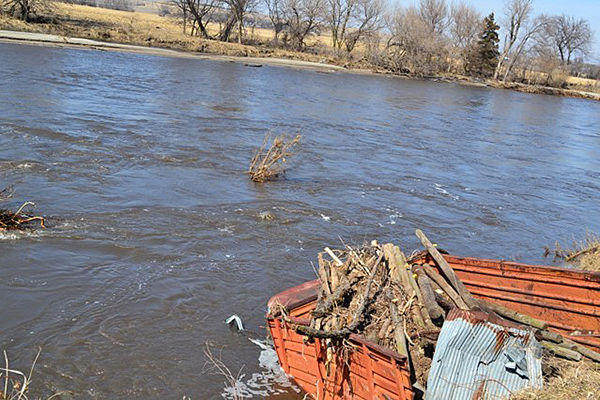 A truck out in the Hansons’ fields is submerged in floodwater from the Elkhorn River. 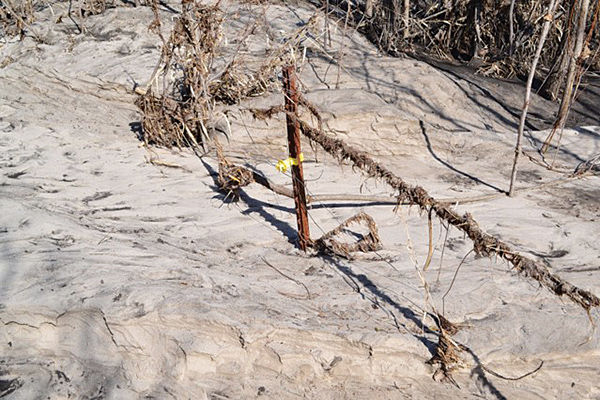 Donna estimated that their farm was under a foot or more of sand after the 2019 flood. 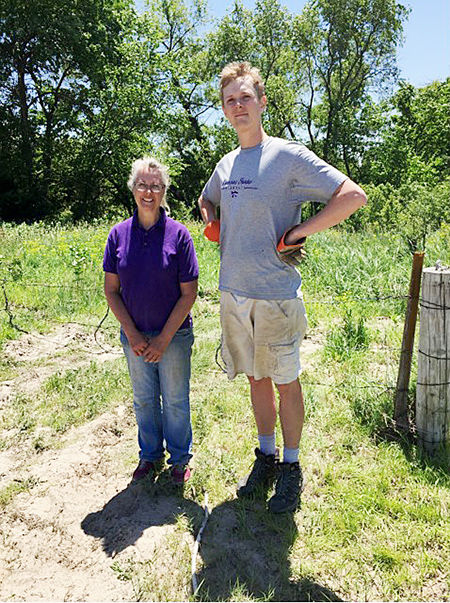 Though they didn’t know anything about building fences, Donna said Tom and John Noble, volunteers out of Texas, were a great help in restoring operations on their farm. Here, Donna and John enjoy a victory photograph during a hard day’s work.

The Hansons attempted to save their calves in the 2010 flood via airboat.

After the 2019 flood, the Hansons found substantial gaps and holes in their fields, one about as big as a dump truck.

A truck out in the Hansons’ fields is submerged in floodwater from the Elkhorn River.

Donna estimated that their farm was under a foot or more of sand after the 2019 flood.

Though they didn’t know anything about building fences, Donna said Tom and John Noble, volunteers out of Texas, were a great help in restoring operations on their farm. Here, Donna and John enjoy a victory photograph during a hard day’s work.

This is a story they’ve told time and again.

In 1996. And 2010. And 2019. The Hansons may still be standing on their land, but they hardly recognize it anymore. What remains to the north is wreckage, left in the turbulent wake of three monstrous floods.

“You don’t know when it’s going to end and what it’s going to destroy in its path,” Donna Hanson said, voice grim as she recalled the floods her family has endured. “It’s just unusual how all of this is happening. In ’96, we had high water, but these last two … man … “

She trailed off, letting the silence speak for itself.

For 42 years, Donna and her husband, Ron, have lived on the family land near Oakdale, Nebraska, raising crops, cattle and kids. It’s the homeplace they are currently transitioning to their son, Jeremy — and maybe someday, it will pass onto his son, Trevin.

But the future of that land is uncertain. Between the three locations of their property, divided by the Elkhorn River, they’ve lost 80 acres of ground. Pastures for the horses and cattle have been terraformed by raging floodwater into river willow forests. A steep embankment 500 feet behind the outbuildings is the only reason they still have a house to call home.

The Hansons’ losses have been accumulating since that first flood in 1996, which began cutting through their cropland and pastures, claiming soil, fences, and animals. When the flood hit, Donna’s horses were in a 50-acre sprawl that was completely submerged. By the time Ron finished a daring rescue to bring the horses home, he was swimming in water up to his neck, laden with the detritus of destroyed homes and vehicles.

Surveying their losses that year, Donna noticed that the home of a local bald eagle pair was also gone, the tree uprooted and sent downriver sometime during the calamity.

In 2010, the Hansons were better prepared, but the flooding was more severe. The bottom of the cattleyard went underwater, and the floodwater took every last scrap of fence they had standing.

Stranded on an island at their neighbor’s farm, the Hansons’ cattle bawled and panicked as the water crept up their bodies, the calves just barely keeping their heads above water. The family quickly formulated a rescue plan. With the help of a kind neighbor and his airboat, they began loading the calves, transporting them to Donna’s horse trailer parked at the top of a nearby hill. But it all backfired.

Out of fear, the calves began jumping into the water, and out of instinct, the cows followed them into the murky expanse.

“Ron said, ‘We gotta quit or we’re losing all of them,’” Donna said darkly, recalling the moment she realized what was going to happen. “That’s what made me sick, I was like, ‘God, I can’t do anything.’”

The Hansons were forced to wait and watch. All told, they lost 15 of their 50 head of Angus cow-calf pairs that day in 2010, and more ground. Floodwater stripped the riverbanks of trees, paving the way for the river to escalate its encroachment upon their land.

With so much of their land destroyed, Donna and Ron threw in the towel on their livestock operation. They sold most of the cattle and horses, keeping only a few for use on the farm and their grandchildren’s 4-H projects. They focused on the row crops — corn and soybeans — and got back on their feet.

In 2019, the floodwaters came with ice, and the destruction was extensive.

Donna was at work in the Antelope County Sheriff’s Office when the flood alert was broadcast. And then the calls started streaming in — more than 200 within a half hour. Floodwaters were crossing the roads, residents were getting stranded and panicking, and a dispatcher called in to alert them of a large ice jam heading south.

While driving one of her co-workers safely home, Antelope County Sheriff Robert Moore spotted the Cedar Creek spilling through the fields and onto the Hansons’ road. He radioed back to Donna, telling her to jump in the pickup and head home.

“It was very, very, very hard,” Donna said of leaving work that day. “I thought, ‘Oh, I should go home, but I have all of these other people (to help).’”

Only when she had a replacement was Donna prepared to leave her post. When she made it home, she navigated around the tree lying across their driveway and headed for the 20-foot embankment. There, she was greeted by a familiar foe — the muddy waters of the Elkhorn were rising.

With Ron and Jeremy at work and cut off from the homeplace, Donna was on her own to see the farm through the worst of the flood. She set an alarm and woke up several times throughout the night, trekking to the embankment with a flashlight to check the black water as it swept past.

Once again, the embankment saved the day. The Hansons’ buildings were untouched. With only six head of cattle and five horses — and the experience of knowing that their livestock would be safe on that higher ground — they didn’t suffer animal loss. Others weren’t so fortunate.

One of her close neighbors had several pregnant cows in a pasture that hadn’t flooded in previous years. The water overwhelmed his pasture, and Donna watched in horror as massive ice chunks slammed the cows into trees.

“It just sounded like a freight train down here,” she said. “It’s just a scary, scary feeling. You don’t know what’s going to happen and what it’s going to take.”

The Hansons lost their fences — again — and a 20-acre alfalfa field.

“There’s nothing you can recover it with,” Donna said of the alfalfa field. “It’s gone.”

She said they would have lost more ground if it weren’t for their brick riverbank. Several years ago, Ron used the materials from a demolished school building to fortify the dwindling bank. And it held.

When they could finally get back out into the fields, the work was endless. They couldn’t wait for the Farm Service Agency to help with the dump truck-sized hole; the crops needed to go in, so the Hansons filled it themselves. They moved logs with Bobcats and by hand. The sand pileup wasn’t as bad as for them as others, Donna said, like in Fremont, where she saw sand up to the irrigation pivots on some farms.

“I can’t even imagine,” she said, commiserating. “I don’t know if they will ever be able to farm again.”

After Ron suffered a farm injury and a few cracked ribs, Donna took to Facebook for help with the fences so they could keep their small herd of cattle and horses. She was connected with two men from Texas, who helped her rebuild a large portion of the fence, refusing to accept anything in return.

While Donna and the family were overwhelmed by the Texans’ generosity, plus some local help with hay, their anxieties continue to build as they wait for government reimbursements and settle financial issues over the ground they can no longer farm. Throughout it all, they’ve been transitioning Jeremy to take over, hopeful that the family farm can survive whatever Mother Nature schemes in the years ahead.

“It’s in your blood, there’s nothing you can do about it,” Donna said with a knowing chuckle. “Your kids don’t want to give up either. Jeremy is bound and determined to keep it going. He’s not going to give up what Grandpa gave us.”

At this time of year, the sound of a ringing phone can bring apprehension and grief to those in the farming and ranching business. This is the season of the banker.

“This is the time of year with notes coming due and other financial stress factors,” said Michelle Soll of the Rural Response Helpline of Nebraska. “It’s our busy time of year.”

On average, the Helpline serves 300 clients a month. During January of this year, they had more than 400 calls to their office in Bancroft, Nebraska, she said.

“Right now we are starting to see anxiety about finances,” Soll said.

The Rural Response Helpline is offered through the auspices of the Farm Crisis Response Council of the Interchurch Ministries and Legal Aid of Nebraska. They offer sound financial and legal counsel as well as emotional and spiritual support via their 1-800 number.

They have financial advisors and an attorney on staff to help farmers and ranchers cope with the stresses of running their agribusiness. They also offer a Stress Management Mediation Program Clinic and contacts in the NDA Negotiations Program.

Several church denominations are also involved. All of those involved have a lot of farm and ranch experience, she said.

Everything is done with the strictest confidentiality and free of charge, Soll said. Most of the Hotline’s clients give their names, but some prefer to be assigned a number.

To access the Rural Response Hotline’s Services call 1-800-464-0258. Their office is open Monday through Friday from 8 a.m. to 5 p.m. Soll and her partner Lori Marr are always glad to help.

Vivid memories of Nebraska’s horrific flooding emergency one year ago will never be far in thought for Lowell Fisher.