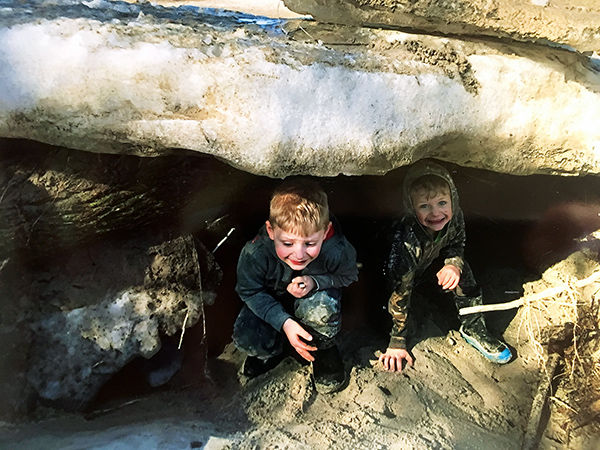 Grandsons of Richard Panowicz crouch under an ice chunk left by flood waters in spring 2019. 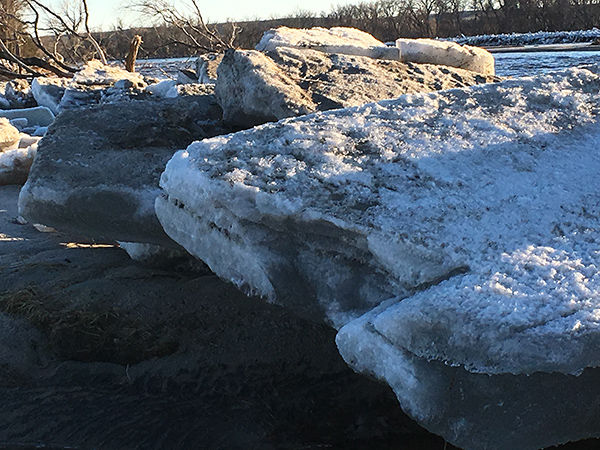 Some ice chunks were as big as a ¾ ton pickup, said Richard Panowicz.

Grandsons of Richard Panowicz crouch under an ice chunk left by flood waters in spring 2019.

Some ice chunks were as big as a ¾ ton pickup, said Richard Panowicz.

Richard Panowicz is a Nebraska farmer who’s thrilled to put 2019 in the rearview mirror. The Rockville farmer lost dozens of calves, miles of fencing, pastureland, as well as hay and silage, all because of severe flooding. Like a lot of other farmers across the state, he just lived through one of the most difficult years of his life.

“It definitely was,” Panowicz said. “We had all that moisture and started losing cattle and fences in the spring. The wet weather cost us corn because our yields were way down. Hay production was also down because things were so wet that we couldn’t get it put up in time. While we always need moisture for our crops, too much of it like that is never a good thing.”

The Panowicz operation lost 58 calves, a bull and a handful of cows due to the flooding.

“The flooding covered a lot of our pasture and meadows up with sand and debris, which means they’re pretty well gone for a long, long time,” he said

“We didn’t have any cropland that flooded like our pastures and low hay meadows did,” Panowicz added. “In the few places where the sand didn’t cover the ground, the grass was already starting to grow back. In other places, the sand is piled 3- to 4-feet deep and I don’t think that’ll ever come back. That sand is so fine that the wind just picks it up and blows it around.”

Out in their hay meadows, Panowicz said they had a good 10-12 feet of water when the flooding hit its peak. Some of the ice chunks floating across their land were as “big as a ¾-ton pickup,” which is a sight Panowicz said he’ll never forget.

The one thing they didn’t lose was any of their buildings, but that doesn’t mean the floodwaters didn’t make the attempt to get to the nearest structures. Although the operation is less than half a mile from the closest river, at the peak of the high water, the ice and water were as close as 5 feet to their barn.

“There wasn’t much we could do while this was going on,” he recalled. “When that much water and ice are coming across your land, there isn’t much you can save. All we could do was sit there and watch it go by until the water finally receded. It was pretty well gone after about three days.”

In spite of the challenges and the flooding, the Panowiczs did get some crops planted, finishing up by the first week in June, which is three to four weeks later than they usually plant.

“We got most everything we wanted to put in,” he said.

Some ground was too wet to plant, and they took prevented planting on it and planted some forage on about 35-40 acres.

Quite a bit of the corn they did plant drowned out because they got so much more rain than needed through the growing season.

“One disaster after another,” he said with disbelieving laughter.

They usually run between 180-190 cow-calf pairs on their operation. Losing 58 calves and several cows to the flooding put “quite a dent” in their bottom line. Like a lot of other livestock farmers, the Panowicz family got out and moved their cattle to higher ground as they watched the floodwaters rising.

“The cattle were out in the low-lying pastures by the river,” he said. “They were flooded and full of ice, so we just opened the gates and called them out of there to move them to higher ground. It happened so quickly that we couldn’t get everything we wanted out of harm’s way in time.”

When harvest rolled around, did he have anything positive to talk about?

“We got most of it done before the snow hit,” he said.

So, the next logical question at this point is how you go about recovering from “one disaster after another.” His answer was a simple one:

“There isn’t a whole lot we can do differently to prepare for this year unless you can figure out a way to control Mother Nature,” Panowicz said. “You try to recover a little at a time and you hope this year will be better.”