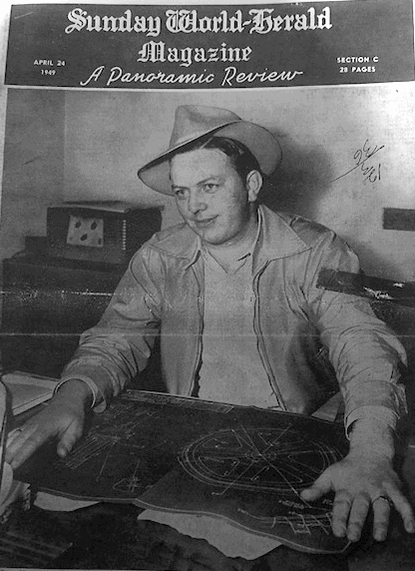 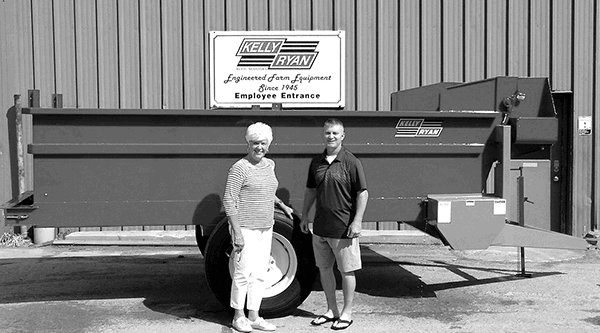 When Kelly Ryan was working for Omaha Steel Works in his early 20s, more than 75 years ago, he was severely injured when a hoist fell on his back.

“He was done working there after the injury because there was no such thing as work comp benefits in those days,” said his daughter Kathy Cook, who is one of the owners of the Blair, Nebraska firm, Kelly Ryan Equipment Company, Inc.

While he may have been done at that job, Ryan was not done with life. In fact, the experience helped launch his dreams.

“At that point, Dad decided to start his own company with the mission of building farm machinery of his design and providing a place of employment where employees would be treated the way they should be,” Cook said.

The late Kelly Ryan grew up on a farm northwest of Blair and quit school after the 10th grade to help his family on the farm. While he did not have a high school diploma or college degree, he had his strengths.

“Mechanically, he was a genius. I guess you could say he started the company at age 26 after attending ‘The School of Hard Knocks,’” Cook said.

With Ryan’s determined spirit, driven to treat others right and create something farmers could use, during the 1940s and 50s, the company employed up to 400 people operating four different plants in the Blair area. They worked around the clock producing and shipping up to 100 elevators a day to be used for elevating hay bales on thousands of farms.

“Once in a while you will still see a yellow Kelly Ryan elevator on farms in Iowa, Nebraska and Illinois,” Cook said.

Ryan married his wife Mardelle (Kuhr) in Blair and had one son, Jim and three daughters, Nancy (Frazier), Janis (Rogge) and Kathy. They were married in December 1941 right after Pearl Harbor.

After a short time of living in Omaha and working out of his garage, Ryan moved his family to Blair and launched the farm equipment manufacturing business bearing his name.

“I remember hearing people in the family talking over and over about how Dad’s goal was to have a business where employees were well-treated and respected,” Cook said. “I am happy to say we have tried really hard to continue that tradition as his kids. Having former and current employees saying it’s a great place to work means a lot to us.”

Kathy Cook wears many hats including; accounting, payroll, human resources and serves as secretary-treasurer of the corporation. Jim Ryan has been with the company since 1966 and Steve Cook since 1970. Kelly and Mardelle are both deceased.

Through the years, the company has produced feed wagons, manure spreaders, elevators and a variety of specially-designed equipment. Those are still in production, but the company’s main product is a silage bagging machine, the Kelly Ryan Big Bagger, sold primarily to dairies through a network of dealers.

During the Korean War, the company produced refrigeration barges for the U.S. Navy. The product line continues to grow.

“We are proud to announce that we are currently taking on the manufacturing rights for a new product,” Cook said.

In 2007, the company diversified by adding the structural steel division where they prepare 50 to 60-foot beams for galvanizing and then ship to various construction sites. They also have a machine shop that does repairs for area farmers.

“We are located near Blair’s Cargill plant so much of our business is done with Cargill and its subcontractors,” Cook said.

Kelly Ryan Equipment products are sold primarily in Wisconsin, Iowa, Kansas, New York and Pennsylvania with a few long-standing dealers in Nebraska. They have also exported equipment to China, Poland, Nicaragua and Colombia.

Cook attributes the company’s longevity to quality: “We produce an affordable, easy-to-use and easy-to-maintain type of farm equipment that has not changed much since Dad developed the initial designs.”

“He was highly sensitive and devoted to the needs of his employees and the community,” she said. “Hands-down, he was committed at every turn to the betterment of his fellow man, especially the American farmer.”

She recounted a story from the 1950s when there was talk around town that his business was not contributing enough to the local economy. His answer to that was paying all of his employees in silver dollars.

“He encouraged them to spend them around town, so when the merchants took that money they knew where it came from,” Cook said.

Ryan also owned a newspaper, The Review Herald. His plan was to resist some of the political issues going around locally, according to his daughter.

In 1949, Ryan’s photo was featured on the front page of The Omaha World-Herald’s Sunday Magazine of the Midlands. In this article, the 30-year-old industrialist was referred to as ‘Blair’s Stormy Petrel.’

“This gives you an idea of what kind of person he was,” Cook said.

Commitment to the human individual has always been at the core of the company, according to Cook.

“We knew there were times when Dad did not cash his paycheck to make sure the employees’ checks all flew,” she said.

He was also focused on customer-service. He had a phone at his house so that when the switchboard was off at the business, it would ring at his house during the evening and on weekends. Sometimes he would take the job of packing and loading parts for someone who was broken down on the weekend, and if possible, he hand-delivered them.

“Dad cared so deeply about this business, his employees and customers that he truly went out of his way,” Cook said.

He also started a restaurant in Blair in 1959, the Blair Marina, which is owned by Cook and her husband to this day. This, in addition to his support and love for Little League Baseball, planting trees, fishing and developing real estate meant he always had a lot of irons in the fire.

“He was on the move and was a man of great ideas who could never be told that something couldn’t be done. He would always say, ‘Oh yes it can,’” Cook said.

Cook said the business and family have remained strong after 75 years. It’s come through ups and downs in the farm economy to be run by a third generations of Ryans who looked up to their grandfather that started out all.

“They are determined to keep the business open and the Kelly Ryan name alive to promote Dad’s good reputation in the agri-business world,” Cook said.

Mostly, she said, it’s about the employees and farmers and ranchers they serve.

“We are personally interested in them as people, not just as a means to an end,” she said. “We really try to take care of them, respect them and treat them well. That is what it’s all about.”

The Ryan family, the Cook family and other investors