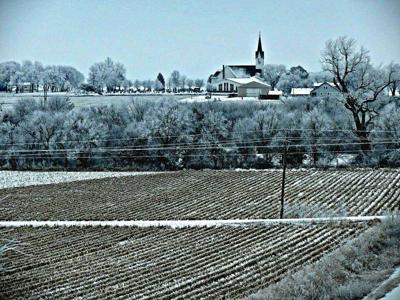 Christmas for churches all over the country will be different this year, but for one rural Nebraska congregation, just being able to be together in worship will be a blessing.

“It’s fun. Our members make all different kinds of meatballs. Everything revolves around balls. The table decorations are bowls filled with ornaments and the desserts are also ball-shaped – donut holes, cookies and so forth,” said Kathy Gloystein, president of Zion’s Lutheran Women’s Missionary League that hosts the dinner.

In place of the meatball meal, the congregation decided it would still feed others, but this year they would do it by collecting donations to the local food pantry.

The response has been unbelievable, Gloystein said. People have hit sales and donated whole cases of canned goods, she said. They created a Christmas tree of donated cans to track their progress.

“Sometimes it’s easy to settle back and do nothing, but we said, ‘OK people, we can all do this even if we’re not in church,’” she said.

Between the donations and a grant, Gloystein was hopeful that by Christmas the can tree will reach to the top of the church balcony.

The women’s league planned other holiday projects, too. The Purple Christmas Stocking Project collected money to assist a needy anonymous family, and they put together shoebox Christmas gifts for local causes.

“There are ways to do things. We cannot forsake our roles as Christians, and people need what we can give them, not only by word but by deed,” Gloystein said.

Coronavirus forced ministries everywhere to change and adapt to shutdowns and social distancing while still trying to share the word.

Zion Lutheran was shut down from March 15 to May 15, which was longer than some Nebraska churches. That’s because of restrictions put out by the Central Health District that includes Hall County.

“It was at the epicenter of the first wave of COVID-19 infections in Grand Island,” Rev. David Feddern said.

Fortunately the Zion congregation had already been livestreaming services for several years, and Feddern used that format to reach members.

“We could only have 10 people in church at a time so I assembled a worship team of myself, our three elders, a pianist, and up to, but no more than, five musicians to lead songs so people at home could follow along,” he said.

When the church opened its doors again in May, leaders decided a gradual opening would be best. As Feddern describes, they chose a halfway point in congregation’s alphabet. One week the first half of alphabet came to church, and in the second week the other half of the alphabet came.

“By the fifth Sunday in May were able to open back up for everyone who wanted to come,” said Feddern.

With all the health precautions, most regular congregation events have undergone changes and adaptations, some of which may be continued, noted the pastor.

Confirmands had to wait until the second Sunday of June to be confirmed, and instead of doing a morning service, they held a 2 p.m. ceremony.

“It was the first time I ever publicly questioned them during the service,” Feddern said.

Usually, he questions the group about a week ahead of the confirmation ceremony. Based on the positive feedback, he plans to do the questioning in the service again next year.

Youth group activities, weddings and funerals were also disrupted by COVID-19. Feddern had more outdoor weddings to perform this year than normal and others have altered plans again this fall and winter.

“There is no aspect of ministry that has not been impacted by this pandemic,” he said.

Church organizations, for example, have had to pivot their activities as well. Zion’s Lutheran Women’s Missionary League did not meet from March through June.

“Fortunately we are not a large group and we could distance,” she said. “We felt that we needed to meet and that Bible study was important, so as soon as we could we resumed gathering and learned how to do it safely.

The group has been sending cards to those who cannot leave their homes. For Christmas, they printed each member a photo book featuring photos of the church decorated for the holidays.

One tradition they quickly resumed was having parents and confirmands come to make their banner for confirmation.

“We got the letters cut out and decorations organized. With only four in the class we were small enough we could do that safely,” said Gloystein.

By late summer they were able to conduct their annual back-to-school tailgate with a few modifications.

“It’s always been outside, so that part was the same. Instead of letting everyone help themselves to the food though, we served it to them,” Gloystein said.

October is traditionally Lutheran Women's Missionary League month. It involves a whole month of activities, and members are encouraged to wear purple. Zion held a small change collection challenge with the theme “People Produce Kingdom Fruit.” They topped their goal and raised $600 with a celebration in the sanctuary where they could keep a distance.

But no matter how careful one is, the virus still can strike. Feddern was exposed to COVID and tested positive in late October, quarantining for two weeks.

“About that time, with the onset of the second wave we started to notice a slow, gradual decline in attendance,” he said. “Some are really not comfortable with coming out, others have employers encouraging them not to join in larger gatherings. It runs the whole gamut.”

Through it all, Feddern says God continues to move in mysterious ways.

“Last Sunday we had 79 in church, but there were 73 people/households watching the livestream,” he said.

It’s been difficult adhering to health guidelines while doing his work, he said.

“God created us to be social human beings, he didn’t create us to live in isolation and live alone by ourselves,” he said.

As the Advent season began more adaptations and changes have occurred. Traditional Advent meals were canceled. Food is prepackaged for fellowship time, and even if people come to church they are still reluctant to take time to socialize after services, Feddern said.

With a high number of Sunday school staff or their spouses testing positive for COVID, Feddern and his elders suspended Sunday School until after first of year. Adult Bible study continues but numbers have dropped dramatically, he said.

“We also made the difficult decision not to have our children’s program on Dec. 24 this year,” he said. “We came to the conclusion that we will still worship Christmas Eve and have a candlelight service.”

Feddern remembers a poem he was given early in his ministry, an adaptation of “The Night Before Christmas.” He will gear his 2020 Christmas message, readings and music to the poem.

“I’ve always thought someday I’d like to incorporate it a worship service somehow,” he said.

He took the original poem and reformatted it into a booklet. In it, he goes through various points in the story and found an image to go with each of them.

While their Christmas morning communion service is usually lightly attended, Feddern hopes he might be surprised this year.

“This really reminds me of what the very first Christmas was like. Joseph and Mary were not in Nazareth with their families, they were in Bethlehem. They were pretty much isolated by themselves and had that baby by themselves,” he said. “The first people told the news of Jesus’ birth were not the royalty of the day. Rather the angels go and tell the shepherds, who at that time in Judea pretty much worked in isolation.”

If he could share one message with those struggling not only with pandemic issues, but any life issues this year, Feddern said: “No matter what happens in our life, we are never alone. God is always with us through his word. Christmas survives, God’s word survives, we survive.”

The history of Zion Lutheran

Zion Evangelical Lutheran Church was founded in 1873 and members immediately started a Christian day school that was eventually called “the south school.” In 1915 a second school was started northeast of the present day church campus and operated until 1943.

When the north school closed and the south school remained open at church’s main campus. It operated until 1969 when the congregation made the decision to merge their school with daughter congregation, St. Peter’s Lutheran in Hampton. Now known as Hampton Lutheran School, it operates across the street from St. Peter Lutheran.

The current Zion Lutheran Church was completed and dedicated in 1897 and has been in continuous use since then. Some small additions were made in the 1970s. In 2009 the former south campus school building was moved to help create a new fellowship hall built by Laborers for Christ.

Zion Evangelical Lutheran church is located two miles east and two miles north of Hampton at 1511 N. Y Road. Visitors are always welcome and may contact the church by calling 402-725-3320 or check the church website at www.zionhampton.com.

With many people buying their meat directly from the farmers that raised it for the first time this year, a pair of Nebraska sisters saw an op… 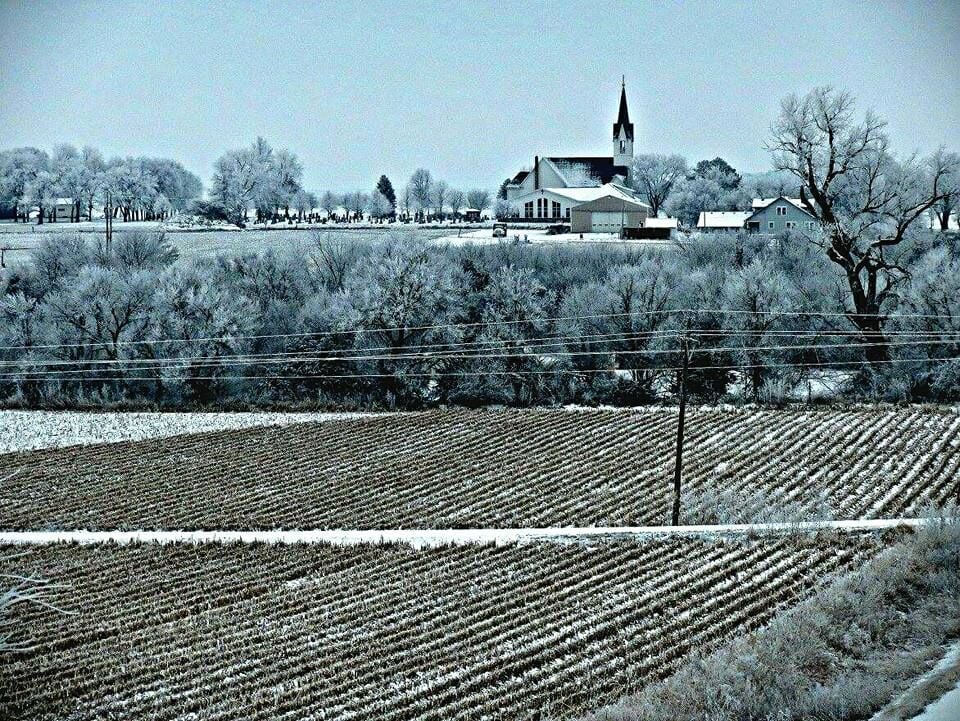 The Zion Evangelical Lutheran Church near Hampton, Neb., is seen across a snowy field during a previous winter. Worship has looked different for churches across the world this year, but even small congregations like Zion Lutheran do big things when they adapt. 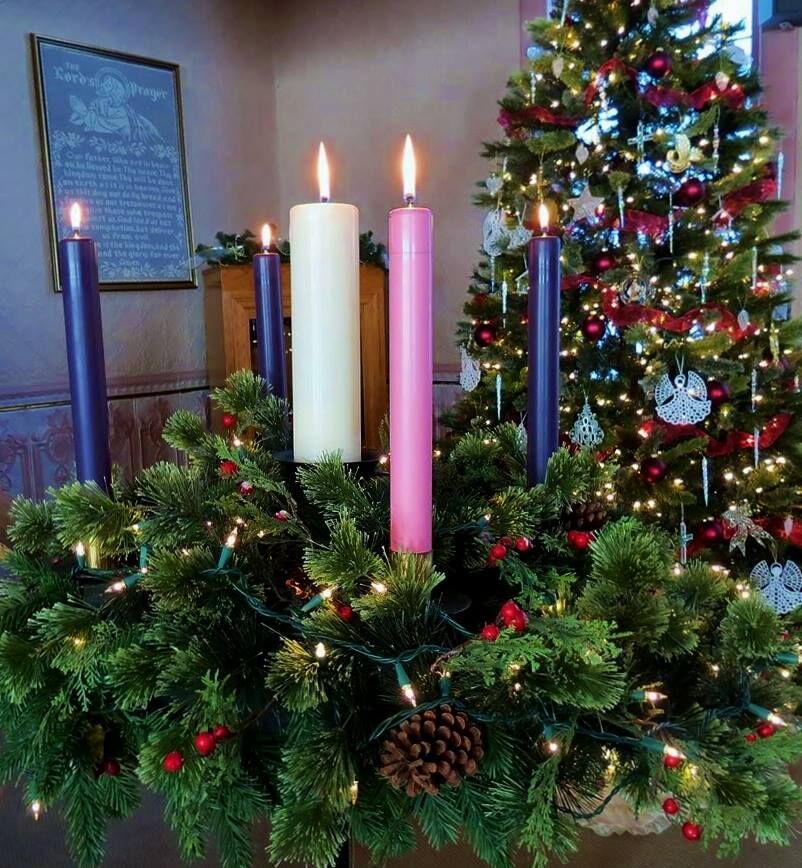 The Advent wreath is lit on the altar of Zion Evangelical Lutheran Church near Hampton, Neb. 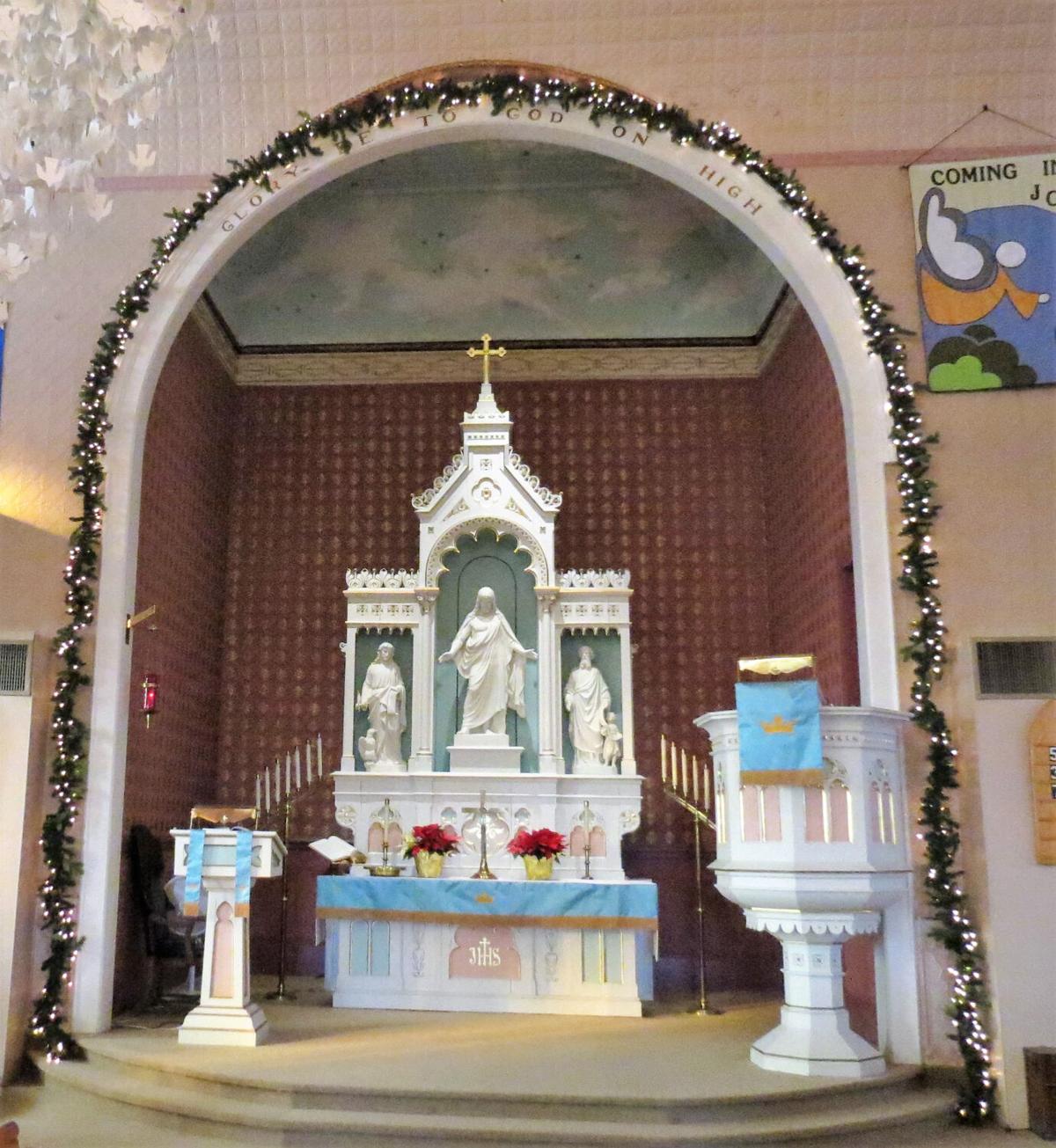 The altar of Zion Evangelical Lutheran Church near Hampton, Neb., is decorated for Christmas. The children’s Christmas program was cancelled this year, but the Christmas Eve candlelight service went on. 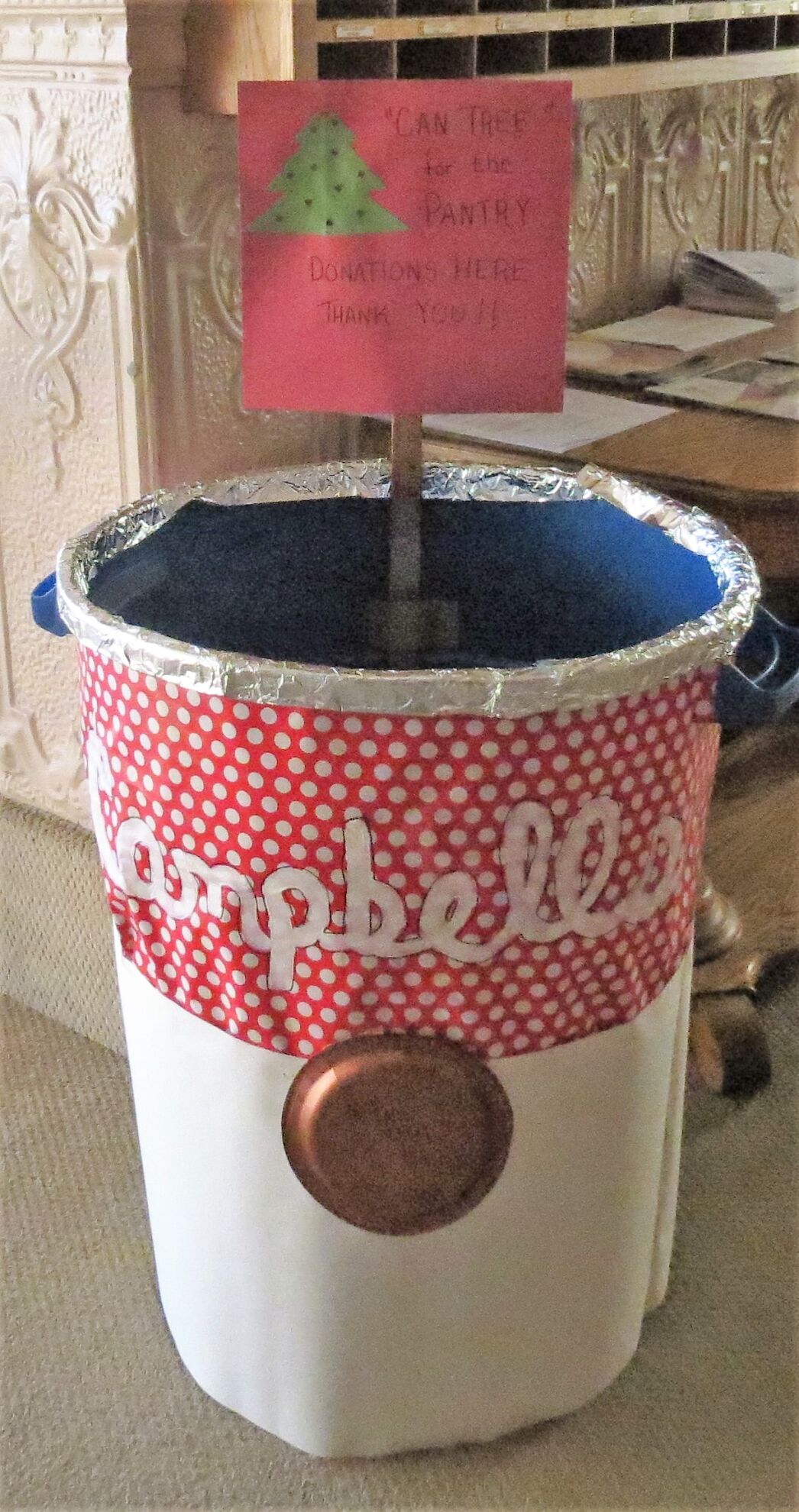 A donation bucket decorated like a soup can is set up at Zion Lutheran Church. Leaders were overwhelmed with the number of donations members made to the local food pantry. 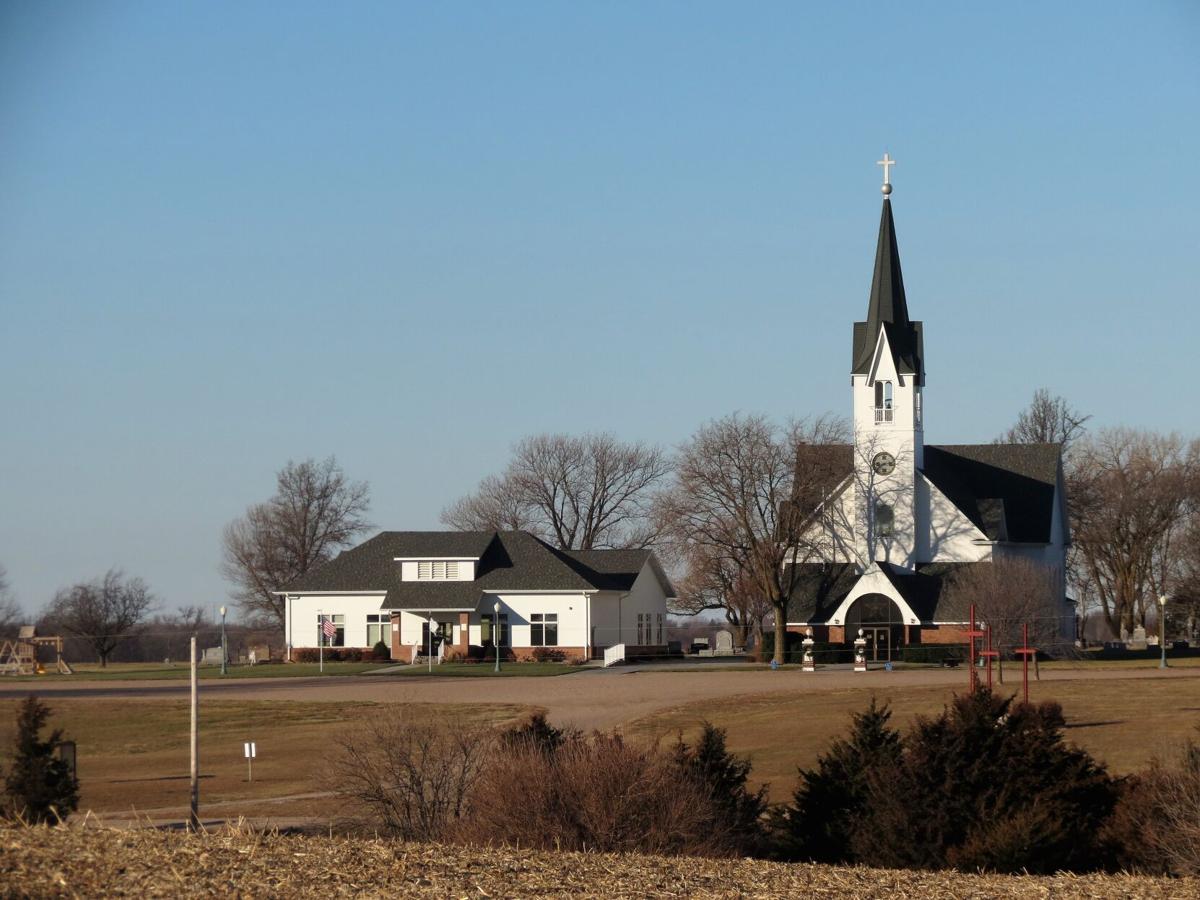 Zion Evangelical Lutheran Church near Hampton, Neb., closed for two months this spring when COVID-19 cases in the area spiked. 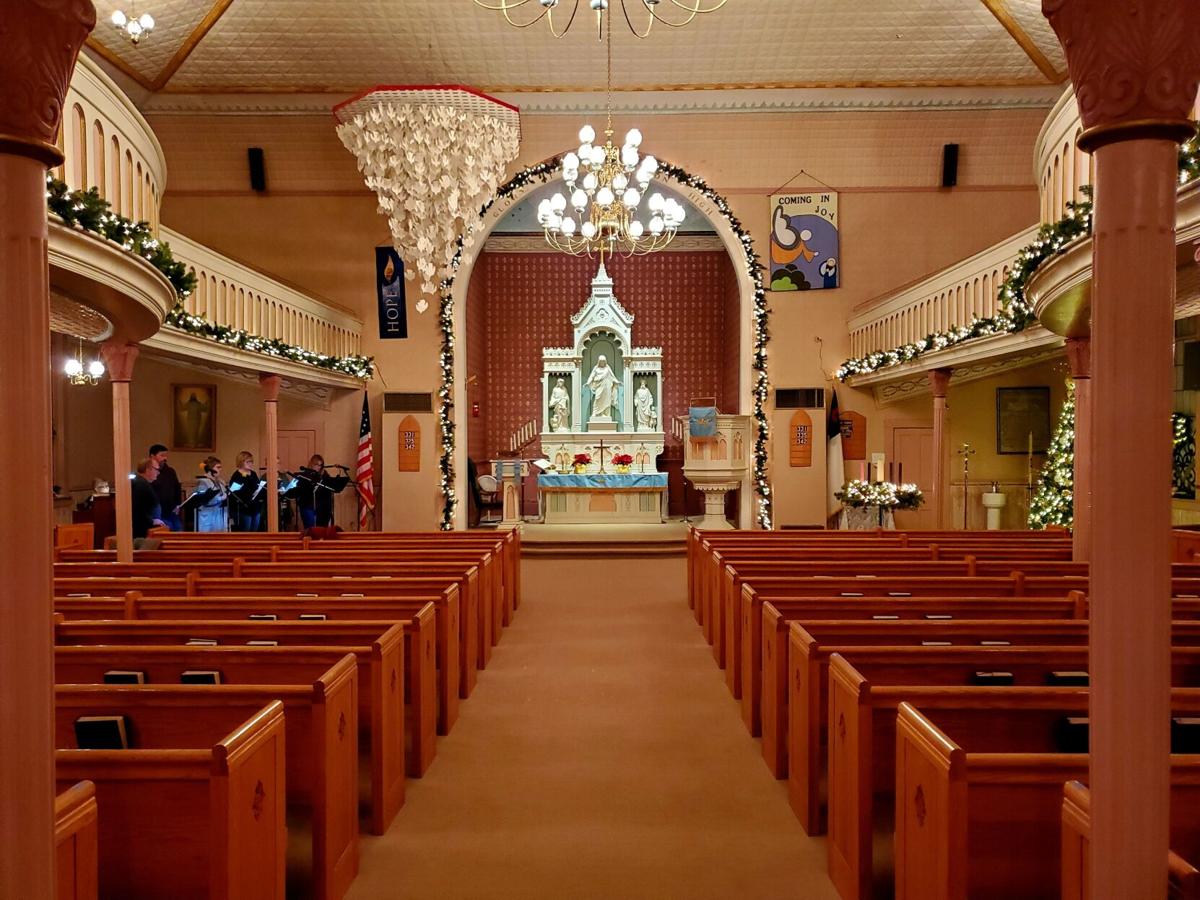