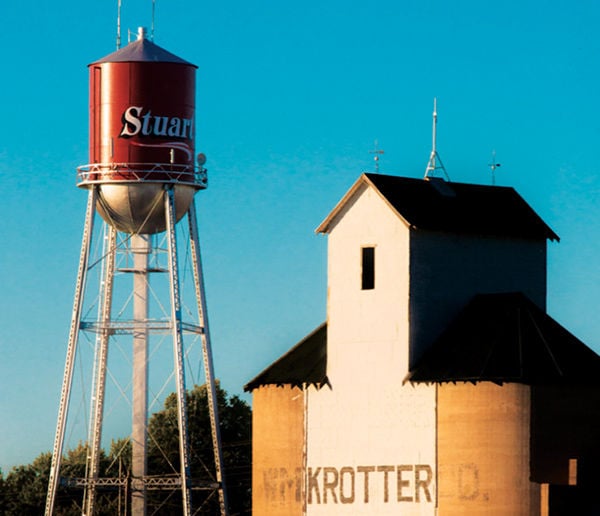 The town’s water tower rises above the city. 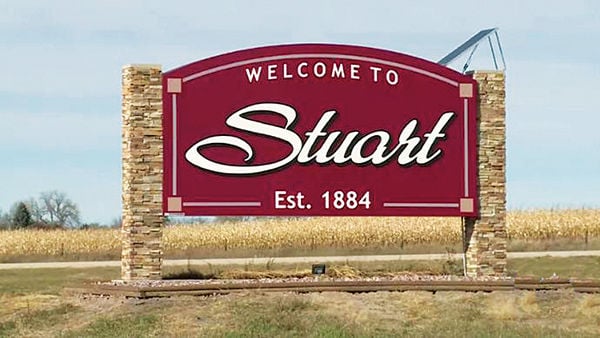 The town’s water tower rises above the city.

Almost since its beginning, Stuart, Nebraska, has been populated by people who were socially-motivated volunteers. This is reflected in the way they have handled challenges over the years and in their individual and civic happiness.

A 2019 Rural Community of the Year, Stuart is a village in Holt County. The population is listed at 590. According to the U.S. Census Bureau, the village has a total area of 1.34 square miles. The village continues to grow and expects to exceed 600 in the 2020 census.

“Everyone works really well together,” said Mark Stracke, Stuart village clerk. “We can always find someone to help with the many initiatives our community comes up with.”

Stuart continues to work together as the community moves into the future. This is possible because of the work done by its citizens in the past.

Stuart was first settled in 1879. John Carberry, an immigrant from Ireland, settled in the area on Feb. 15, 1879. His father-in-law was Peter Stuart the original owner of the town site and the first postmaster. The town of Stuart derives its name from him.

According to the Stuart History website, Carberry and his family filed a homestead claim and built a sod house. From this soddie he sold and bartered food, tools and other necessities that he brought from Atkinson.

Eventually Carberry established a general store. Another homesteader, Orange Hallock, operated a grocery store while also serving as justice of the peace. The Stuart history site states that it was these two men’s belief in the future that attracted other pioneers and businessmen.

In 1880, the town built its first school building. The next year the Fremont, Elkhorn and Missouri Valley Railroad arrived and established a depot. The Stuart population grew from 60 in 1882, to 382 in 1883.

The historical site states that Stuart shared in the dangerous excitement of early vigilante committees and men known as outlaws. Two of the most notorious outlaws around Stuart in the 1880s were James M. Riley, (alias Doc Middleton, alias Texas Jack, alias Gold-Tooth Charley) a notorious outlaw and horse thief credited with stealing more than 2,000 horses over a two-year period; and his lieutenant in the Ponyboys gang William Albert “Kid” Wade.

The fledgling community was struck by a calamitous fire in 1884. The fire swept through an entire block, wiping out stores and merchandise. But, they rebuilt and in 1888, the population had grown to 600.

By 1890, Stuart had a population of 700. With the devastating fire still fresh in the townsfolks’ memory, a system of waterworks had been constructed.

In the summer of 1922, Stuart held a special election to get approval to construct an electric light plant. It was approved and Stuart was "lit-up" for the first time on Monday, Feb. 19, 1923. Stuart Municipal Power, the light plant, is still owned by town. The village employs 18 people one of which is an electric lineman. Stuart also handles its own water, sewer, trash and a natural gas company.

“Natural gas has been a big driver of irrigation in the area over the years,” Stracke said. “We have expanded the system, too.”

The town continued to grow and in 1930, it recorded a population of 763. The Village Board established its now long-standing tradition of community improvements when it decided to purchase an auditorium in 1935.

According to post records, the American Legion Unit received official approval of its name change to Norton-Carlisle Post No. 115 in 1947. The Legion was just one of many social clubs where community members of like mind could gather and share ideas.

“One way we are able to keep many of our young people in the area is through a sense of belonging,” Stracke said. “Getting the youth involved in civic events and organizations early on; letting them experience that sense of belonging. That way they know what is available to them in the community.”

Another way the village does that is through local businesses. Since Stuart operates its own electric company, it has the chance to sponsor a lineman intern.

There is no local farm cooperative. So, the local agribusiness, Stuart Fertilizer & Grain basically fulfills that role, Stracke said. Some of the young people work driving trucks.

In 1953, the Stuart Stock Car races began. They continue to this day. The White Horse Ranch Museum was opened in 1964. It still houses many items from the White Horse Ranch as well as many other antique items to preserve the rich heritage of Stuart's history.

On July 1, 1971, the Parkside Manor Nursing Home opened its doors. In 2000, an assisted living facility was added.

“Parkside Manor has a lot of summer interns,” Stracke said. “In fact, we get students in from many areas.”

The 1980s found the village installing a concrete main street. The fact that Stuart owns its own street equipment for maintenance and repairs helps offset the costs involved. It also opens another avenue for local employment for young people, Stracke said.

In May 1983 the Atkinson-Stuart Arts Council was formed. That is the year the Bronco’s football team earned a spot in the state playoffs.

The 1990s brought more improvements to Stuart. The Stuart Development Corporation constructed and sold four spec-houses and also purchased and cleaned up vacant lots for resale and development.

“We’ve always been at the forefront of housing in the area,” Stracke said. “We work closely with our economic development group to get housing built.”

He credits the Local Option Municipal Economic Development Act (LB 840) for the funding to accomplish much of this. The half-cent sales tax which can be designated by the municipality for property improvements has been a boon to economic development, he said.

In 2000, another community organization – the Stuart Community Foundation was formed. The foundation was involved in helping the city build an ice skating rink and new soccer fields for the City Park in 2003. It was also an integral part of getting new playground equipment installed at park in 2007 and a walking trail was installed at the park in 2008.

“The park is the centerpiece of Stuart,” Stracke said. “A lot of people visit. We have an ice skating rink, a couple of baseball fields, a soccer field, a football field, tennis courts, picnic shelters, a camping area and a new splash pad.”

The community foundation was instrumental in initiating the Murphy Center project in 2006. The Murphy Theatre & Media Center opened in April 2013 and is hailed by some as the “Jewel of Stuart.”

The original owners, Clement and Mary Murphy, ran the LP Gas Company from the building. Through the efforts of Jon Schmaderer, president and CEO of Tri-County Bank (headquartered in Stuart) the Murphy’s donated the building to the city on the stipulation that it be used for the community.

Town leaders debated putting in a youth center or senior center, but settled on a movie theater, said Stracke. Renovations were funded primarily by the Stuart Community Foundation. It is completely operated by volunteers; except the manager, Darby Paxton, who does the ordering and keeps the books.

Local popcorn farmers, Kurt and Wayne Kaup, owners of K&W Farms, provide popcorn at no cost to the theater. The city cleans the sidewalk area and provides snow removal.

To date, there have been 4,554 volunteer shifts since the cinema’s doors opened. They have served 28,753 buckets of popcorn.

“It helps keep people in town,” Stracke said. “The next closest theater is in O’Neill.”

Another innovative attraction in town is the new Joyride Roller-skating Rink. Owners Darryl and Michele Meusch have renovated an old filling station. The interior is done with retro wood floors.

Stracke said these fresh ideas are not all. He and the other movers-and-shakers in Stuart are planning to acquire an actual movie marquee for cinema and a press box for the football field.

The village has plans to acquire land and develop sub-divisions north of town, get smart electric meters for dwellings, upgrading the town’s electric grid and looking at obtaining an independent solar array network (possibly with a fuel-cell link) as a backup against outages.

“We have so many people that are always ready to help us in the process of maintaining a vital town,” Stracke said. “From the Spring Fling to the Community Club Harvest Festival, they are consistently there.”

Mother Nature tested Nebraska this year with massive floods and crippling blizzards, but as always, the people pulled together and made it thr…