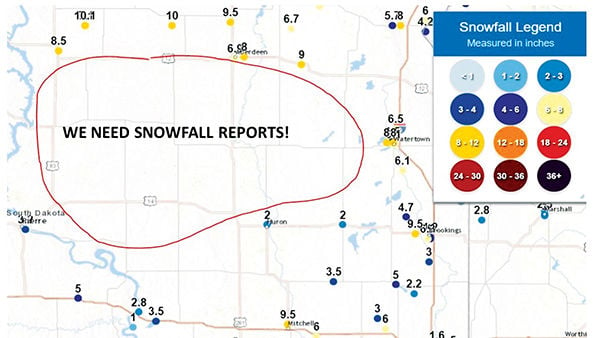 An area of central South Dakota is highlighted where weather reporters were needed before an expected snow storm this past December. After long time reporters retired or moved away, there’s a gap in the data they once provided. 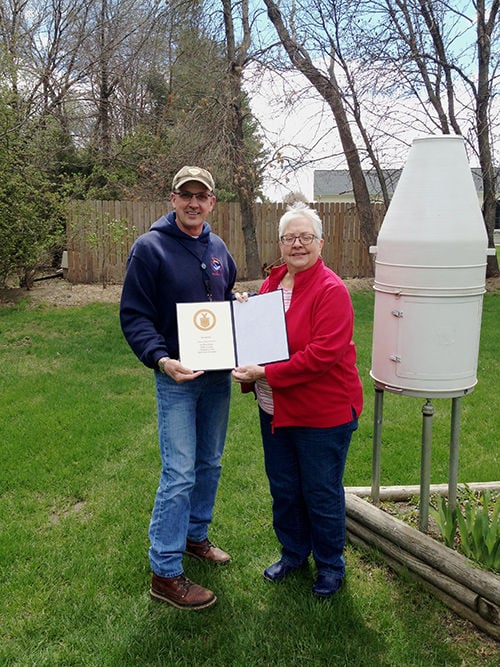 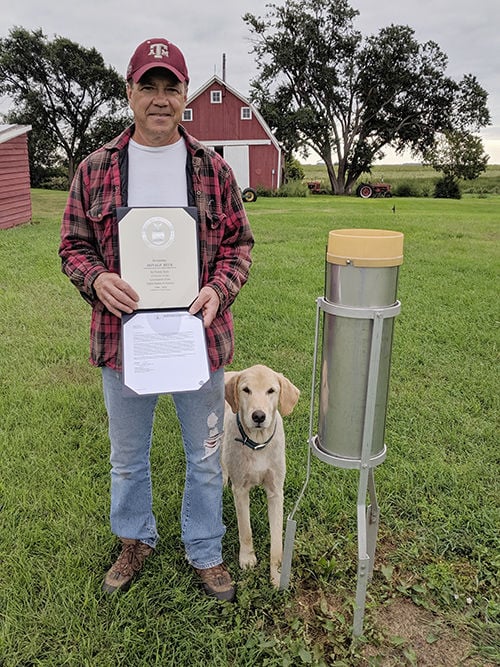 National Weather Service volunteer observer Don Beck of Winfred, South Dakota stands by his weather equipment with his award for 20 years of service.

An area of central South Dakota is highlighted where weather reporters were needed before an expected snow storm this past December. After long time reporters retired or moved away, there’s a gap in the data they once provided.

National Weather Service volunteer observer Don Beck of Winfred, South Dakota stands by his weather equipment with his award for 20 years of service.

Farmers and ranchers talk about weather as much as meteorologists and climatologists because immediate, micro-scale and long-term forecasts affect almost everybody’s livelihood and the farm economy.

Daily weather conditions are carefully measured by a hardy group of volunteers diligently reporting to the National Weather Service as part of its Cooperative Observer Program (COOP.)

Lately, however, South Dakota National Weather Service offices have some gaps to fill in this volunteer program.

Two observers from Gettysburg in central South Dakota moved away recently, and another further north in Faulkton left. Finding new observers in those areas are two immediate needs, and there are others throughout South Dakota and other states.

“These offices have 100 years of records, so those are really long-term stations,” South Dakota State Climatologist Laura Edwards said.

Losing a COOP observer affects the National Weather Service, the state climate extension and U.S. Army Corps of Engineers, which all rely on data the observers provide.

This time of year, they provide valuable information to help people prepare for potential flooding. Observers report how much water is in the snowpack. Later in the season, they give information about drought conditions, Edwards said.

This program is also deeply valued by Tim Kearns for more reasons than just weather data.

Kearns manages the data acquisition program at the National Weather Service office in Aberdeen, South Dakota. He oversees the COOP and Upper Air programs for 38 offices in the central U.S.

“These folks brave the blizzards of winter and severe thunderstorms of summer to make sure they report their daily observations,” he said. “I thoroughly enjoy traveling out to their observing locations and having an opportunity to meet them and thank them for their help.”

Volunteers are provided with all necessary equipment for taking observations, including a rain gauge, temperature sensor and readout, snow boards and snow sticks. Some sites have soil temperature probes, evaporation pans and river gauge equipment. The National Weather Service also provides training and has experts available to answer questions.

Even with automated recording systems and professional help, it’s difficult to recruit new observers, said Nebraska climatologist Al Dutcher. The cooperative observer program has been in decline for the last 20 years, he said.

“You really have to love weather and be totally dedicated to the task,” he said.

The Midwest and Great Plains regions are known for the longevity of their observers.

With the advent of mesonet weather monitoring stations, climate can be monitored fairly precisely. However mesonet stations can cost $15,000 to install and another $2,000 or more in maintenance costs each year.

“That’s a lot of cooperative observers for the price of one high tech monitoring device,” Dutcher said.

Climatologists and meteorologists are ardent supporters of the national program.

“It’s an excellent idea. People with an interest in weather would love learning about other people so interested in the weather, they observe it for basically free — some for over 100 years in the same family,” said Michael Moritz, a warning coordination meteorologist with the National Weather Service in Hastings, Nebraska. “I would imagine many of your readers actually know the local observer.”