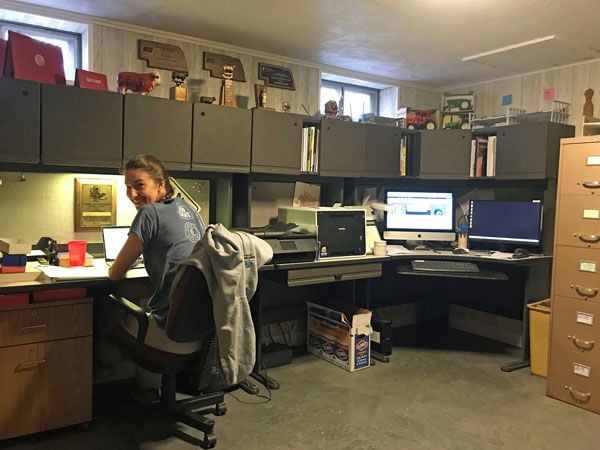 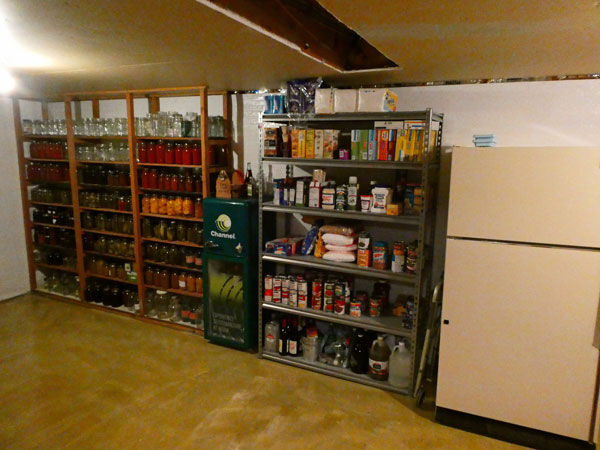 The basement pantry is put back together after a remodeling project at the Batie home. 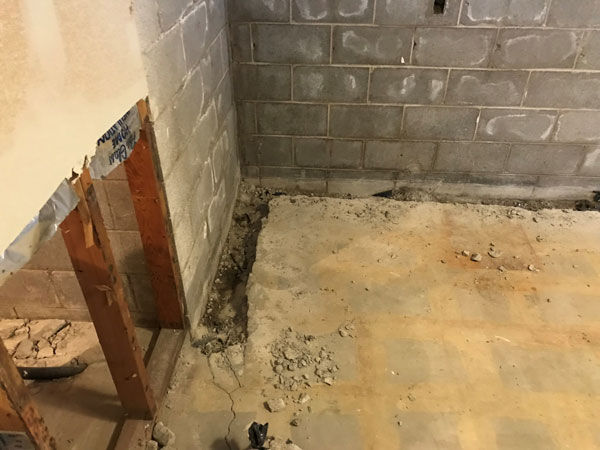 Interior drain is installed for a sump pump system at the Batie home, then new cement is poured and a floor finish goes on top. 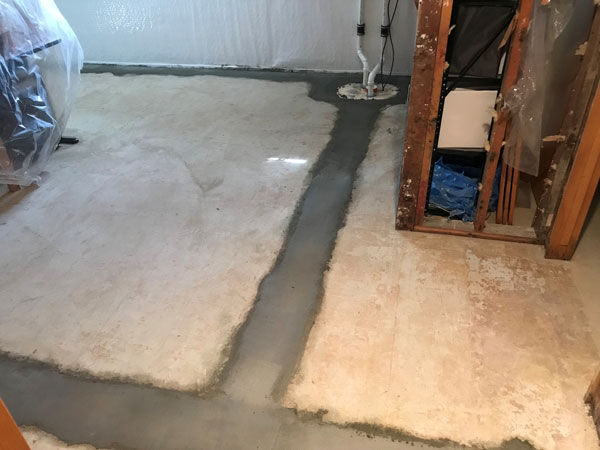 Interior drain is installed for a sump pump system at the Batie home, then new cement is poured and a floor finish goes on top.

Editor’s note: Following heavy rains in the spring and summer of 2019 the groundwater level rose so high in Midwest Messenger correspondent Barb Bierman Batie’s area that she and her husband, Don, had at least one inch of water in their basement almost continuously from Memorial Day until Labor Day. This is the story of their basement renovation.

When the strains of the “Home Improvement” television show theme waft over the airwaves I can now smile as we near the end of our own enforced home improvement project. A year ago I wasn’t smiling and neither was my husband.

After a wet winter and spring 2019, three inches of rain on Memorial Day weekend was too much. Our poor sump pumps couldn’t keep up. When our younger daughter went downstairs Memorial Day morning in search of my grandmother’s good China to take to our Lincoln house, she came running back up the stairs: “We’ve got water in the basement!”

We sprang into action moving as much as we could up on top of tables and chairs. Then upstairs into the living room and dining room and eventually the garage. Twice over the summer we thought things had dried out enough to move things back down, only to have another gully washer that brought water seeping right back in.

By August it was evident we were going to have to take drastic measures or surrender the basement to the water gods. Hubby visited with various interior drainage system vendors and in September we committed to have a system installed during the winter. To show how bad things were all over the state last year, the earliest date we could book was Feb. 25, 2020.

With that deadline in front of us we had to get serious about a full-blown basement renovation. Little had been done to the basement since my in-laws built the house in 1968, so after assessing that our mold and water damage was more serious than we thought, it was a full clean out of all but the largest pieces of furniture and gut of walls, ceiling and flooring.

After removing all the baseboard heaters and securing the electrical outlets we could tackle the removal of offending materials. We began in late August and finished the last of the demo work in March, working around harvest and holidays.

All moldy demolition work was done with face masks, disposable gloves or leather work gloves, depending on the material being handled. We all wore old clothing that could be washed in hot water every night and thorough showers were also a must. A plastic drape was installed between the kitchen and the basement door so that as moldy drywall and paneling were hauled to the payloader bucket on the lawn, the spores wouldn’t get into the rest of the house.

Then it was time to remove the old floor tiles. The job went easier than we expected because most of the tiles had popped loose by virtue of being under water much of the summer. We kept masks and gloves on throughout this process as well, as the glue that had held the tiles down had disintegrated into an irritating powder.

By the time the crew arrived to install the interior drainage system, all remaining boxes had been removed from the basement and my fruit room shelves were emptied and packed into boxes stored in the garage. The furniture that remained had to be moved to the center of each room and draped in plastic so the drainage pipes could be installed in trenches cut into the concrete around the exterior wall with cross drains in the center. Our crew knew their job and took only four days to install the system that now consists of four small sump pumps located strategically around the basement.

Our investment paid off quickly. Just one month after installation was completed the pumps started running as the ground water level rose, but our basement stayed nice and dry.

With that portion of the upgrade complete, we could concentrate on the floors, walls and ceiling. We first had to build a free-standing, two-by-four stud wall against the concrete block exterior walls, which were now covered with a moisture barrier that could not be pierced.

Having hauled out saturated carpet three times since our first basement flood in 1993, there was no way we were putting anything other than area rugs on the floor. We explored various tile and linoleum options, but our budget had been zapped by the five-digit cost associated with the drainage system.

Then I recalled the painted floor my nephew and his wife had done in their garage in Fremont and wondered if something similar could be done for our basement. A quick internet search yielded no less than a dozen articles about the best type of paint for basement floors and all types of YouTube videos on how to paint a basement floor.

After visiting several hardware stores and some big box stores we settled on a two-part epoxy paint, which consists of an epoxy resin and a hardener that are mixed together. After hardening the resulting surface is extremely durable and according to the label is also chemical-resistant.

We selected three different colors. A grey for the office, a marbled yellow for the fruit room and our north bedroom and a marbled rust for our big room. When using special colors, you first paint a base coat and then follow instructions in the coloring kit for painting the colored coat.

With the floors painted we opted to finish the office and fruit room first, as Hubby was more than ready to move out of the spare bedroom where a six-foot table and one cabinet had served as an office since the danger of electric shock necessitated a move out of the basement shortly after the flood began.

After tearing out the moldy drywall, we just couldn’t quite stomach putting up drywall everywhere, even knowing the drainage system is supposed to keep water out for good. So we opted to use paneling on all but three walls. Again we selected three different kinds to fit the color schemes in the office, bedroom and the big room.

As we began this phase of the renovation, a skilsaw and sawhorses were brought in from the shop to cut drywall, paneling and trim. We purchased an air-nailer and air-stapler to put up the paneling. We also repeated the old adage, “Measure twice, cut once.” Hubby won’t say exactly how many times he miscalculated, but we managed to cover all our mistakes.

Because the dust from the paneling was fine and irritating, Hubby used a respirator mask as a safety precaution. After taping and mudding the drywall, he kept the mask handy to wear when sanding the seams smooth.

Speaking of ceilings, we went with straight white ceiling paint throughout the basement to keep things bright. Basic white interior latex paint is also a good buy. We opted for the flat finish to cut down on possible reflection that can occur with glossy paint. For the drywall and one concrete block wall, we used a primer first, followed by an eggshell finish interior latex.

We purchased wood for the baseboard, molding and window trim in the bedroom and big room, along with stain and varnish to coordinate with the floors and walls.

Our last purchase was ceiling tile to replace the 50-year old squares that had been water stained, cracked and cut through as the result of different water events and repair jobs over the decades.

As we near the end of the renovation project we estimate we have spent $6,500 in materials, using manufacturer’s discounts and rebates whenever possible. While we didn’t track our work hours, it is safe to say we saved almost double the cost of materials in labor.

While this project has taken us nearly a year, it was worth the wait. Not only will the renovations add tremendous value to our home, it will help us continue to make family memories for years to come.

Gottsch Livestock Feeders in Red Cloud is looking for General