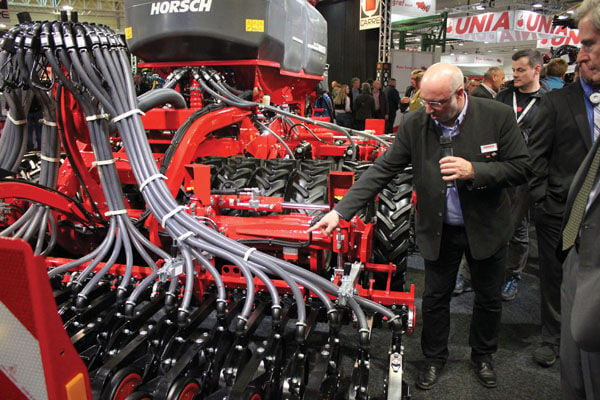 Horsch sales associate Christian Wolf discusses one of the company’s latest drills at the 2019 Agritechnica show in Hannover, Germany. 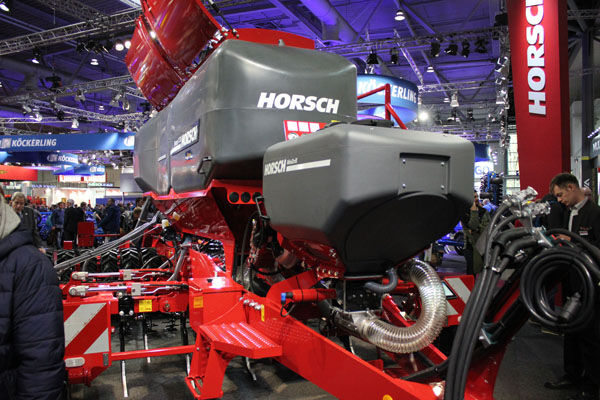 Horsch began with a maize seed drill, which was released in 1981, and expanded over the years to include tillage equipment and sprayers. 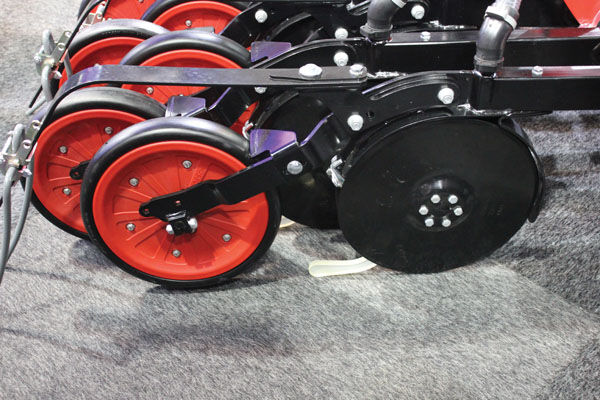 The Horsch company’s specialty is seed drills, of which it had several on display at the 2019 Agritechnica show in Hannover, Germany.

A forward thinker since he was 21, Michael Horsch told those joining in the West Central Nebraska Research and Extension Center’s virtual Water and Crops Field Day that the world is about to experience a quantum leap in ag production change.

One of four sons in a Bavarian Mennonite family, Horsch left his German agricultural college after one year to come to the United States. With all of his brothers wanting to farm, he knew he had to find a way to purchase his own farm, so he spent two years learning the ropes of American agriculture.

While he was gone, his father and uncle began researching and discussing the concepts of minimum and no-till farming for their rocky Bavarian soil.

“We had this vision of farming where we should not till our soils anymore,” Horsch said. “But that was very controversial back in the early 1980s because if you did not plow your ground, you were a bad farmer.”

Upon his return to Germany from the United States, he asked his father if he could build a no-till seeder. He got permission and his elders assured him that if it didn’t work, they’d make it work.

Horsch’s first development was a maize seed drill that rolled out in 1981. The Horsch family exhibited at their first agriculture show in Munich in 1982 and the rest, as they say, is history.

“Seeders were the primary piece of equipment we worked on,” he said. “Now we are all over the world with 250 dealerships in Eastern and Western Europe, North America and South America. We also specialize in tillage equipment and sprayers.”

“Since we are still farmers, a lot of technology ends up in our equipment,” he said.

Robotics and precision ag are two areas where they are constantly learning and tweaking things to make better equipment for their customers.

“We are part of a benchmarking group with members operations ranging in size from 2,000 to 20,000 acres,” Horsch said. “Most members’ farms are in Germany and some are in the Czech Republic.

“For 70 years we get together once a year for what I call our ‘come to Jesus meeting.’ We open the books to each other and share our best practices. We have consultants, about 30 farmers per consultant, and through this we are able to make improvements that keep us profitable.”

Through this group, they discovered the least profitable were the most digitalized. Some precision is good, Horsch said, but too much data can distract a farmer from the basics.

“Farm manager farms aren’t nearly as profitable as those with family members,” he noted.

Robotics is what will bring the next generation of farm kids back to the farm, mused Horsch. He gave the example of a visit to a farm about 30 miles from the HORSCH headquarters.

“Three sons had built and were operating a robotic seeder and I went to take a look,” he began “The father just stood there and watched while the sons worked on the seeder. He noted he knew nothing about robotics but knew that this is what his sons loved and they were making it work. This generation of kids is trained to run robots. This is the next level of change in farming.

“We are not going to eliminate people, we will need to get young kids who are already digitalized. They are already trained. This is a way to get a young operator intrigued. Give them the tools and they will come back to the farm.”

The quantum leap in ag production will come as the movement toward more healthy eating continues. “We eat so much processed food,” Horsch said. “This comes from us farmers in the last 50 years doing our job. We have allowed even the poorest of the poor in our Western societies to eat what they want. If we would slightly change our diets, we would dramatically change our health. The answer is already out there. If we don’t watch what is out there (the various food movements), we’ll be run over by it.

“If I was a corn and soybean rotation farmer, I would start looking at slightly altering my rotation.”

The answer, according to Horsch, is to come up with something that falls in between going totally organic but isn’t totally conventional farming.

“Come up with a rotation that cuts back on chemicals — I’m not saying go organic — just rotate and work toward eliminating that emotional side of using herbicides,” he said.

Horsch is calling the happy medium “hybrid farming,” or to use another buzzword, “regenerated farming.” He is developing a demonstration farm near Bloomington, Illinois, as a way of introducing the concept to the Corn Belt.

“When we bring in all the things I discussed, diet and crop rotation, we will be sustainable,” he said.

Unfortunately, the coronavirus has taken a lot of momentum out of their plans for Bloomington, he said, as he’s been unable to visit the farm this year.

“So far we are implementing an organic farming piece there, starting with alfalfa in the rotation,” Horsch said. “Long-term the idea is to get out of the corn-soybean rat race and put in a few more crops, using both organic and conventional farming with a controlled traffic approach, which is controlling the number of trips through the fields.