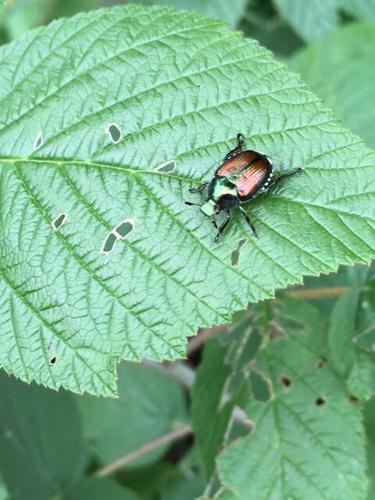 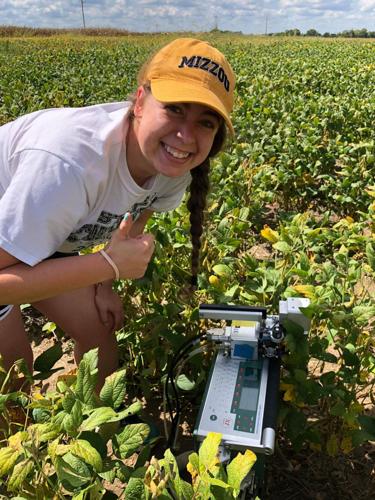 Emily Althoff, Ph.D. student at the University of Minnesota, College of Forestry 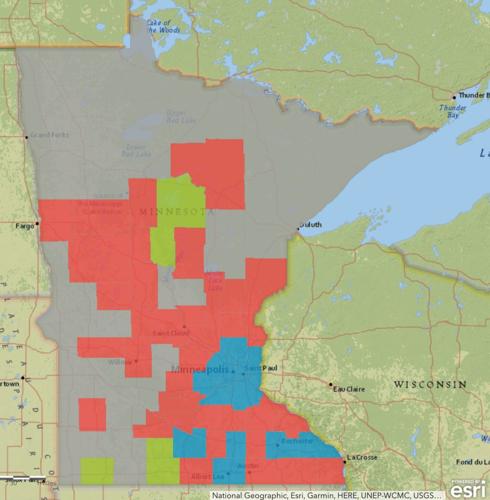 Many, but not all beautiful insects are good for crops.

For instance, the shimmering green and copper iridescence of the Japanese beetle (Popillia japonica) is quite intriguing the first time you see it.

The adult scarab beetles, though, feed on leaf tissue and fruit, while its larvae chew away roots.

Their attraction is lost when thousands or millions of the beetles are mating and chomping through plants.

Japanese beetles can eat more than 300 types of vegetation, including corn and soybeans. So far, the beetle hasn’t caused economic losses to these Minnesota commodity mainstays, but their vociferous eating can hurt fruit trees, sweet corn, and other foods that are raised directly for human consumption.

In addition, farmers know that defoliation may not kill a corn or soybean plant, but it could reduce quality or yield.

A University of Minnesota Entomology graduate student, Emily Althoff, studied Japanese beetles while completing her master’s education at the University of Missouri. Her work focused on plant-insect interactions with a focus on plant growth and defense theory.

Her article on Japanese beetles was recently published in the prestigious Journal of Integrated Pest Management. Her advisor, Kevin B. Rice, Ph.D., an assistant professor at University of Missouri, was also noted as an author.

Althoff studies ecology as well as the ways that insects use chemicals to communicate, and parasitoid wasps.

Within that context, she joined the doctorate program at the University of Minnesota Forestry Entomology Lab to study the eastern larch beetle.

Both Japanese beetles and eastern larch beetles use chemicals to communicate.

In the last few years, Minnesota homeowners have found copious numbers of Japanese beetles on their roses and trees.

Many homeowners have mistakenly purchased Japanese beetle traps – large bags that contain a pheromone that attracts these beetles – and hung them in their backyard trees.

The traps will draw in thousands of beetles, but it doesn’t seem to lower their numbers.

“We do not recommend using those traps in small fields or for your home or garden,” Althoff said. “It’s almost like the chemicals used for the Japanese beetles work too well. They really like those compounds, so you’re going to attract more to your site.”

The traps, Althoff said, should only be used as sentinels to determine where the beetles are located.

Speaking from personal experience, Althoff was conducting research when she accidentally got the pheromones on herself.

“I was getting followed by swarms of Japanese beetles,” she said. “They were in my hair. I was pulling them out of my hair in the truck. They get everywhere.”

Rather than using traps, the best backyard course of action is to pick off or sweep down the Japanese beetles from trees or gardens and dump them in a bucket of soapy water.

In Japan, beneficial insects and pathogens largely control the beetles. These biocontrols are lacking in the United States, where Japanese beetles were first recorded in 1916 near Riverton, N.J. Japanese beetles have spread throughout most states east of the Mississippi, according to APHIS. Partial infestations have occurred in Minnesota and the Dakotas.

APHIS has a goal to protect agriculture in the western U.S. from infestation. Birds and mammals will eat Japanese beetles, and predatory flies or wasps can kill them.

By looking up Extension research, Althoff found references to Japanese beetles in Minnesota beginning in 1968. Populations were not very abundant until 2001.

Now, Japanese beetles are abundant throughout the Twin Cities and its suburbs, as well as in southeast Minnesota and some counties in south central Minnesota.

“Populations in Minnesota have fluctuated, and that could be due to some environmental factors – such as drought or the potential introduction of natural enemies (like parasitic flies),” she said.

Japanese beetles emerge from the soil in early summer – June or July. After they emerge, the females mate and produce 40-60 eggs. The eggs are laid in the soil, and larvae hatch and feed on the roots of plants and grass.

“They overwinter in the soil,” she said. “They’ll keep developing in the spring underground and emerge as adults. The cycle starts again.”

Japanese beetles feed in the upper leaves of plants, so scientists believe that defoliation will not reach levels where it significantly hurts corn or soybean yields, Althoff said.

The situation could be quite different for fruit trees or ornamentals.

If producers see problems with Japanese beetles, it would be good to contact a crop consultant before deciding to make an insecticide treatment.

“When we are looking at damage, it’s important to scout for defoliation percentages, and only spray when we reach the threshold,” she said.

Insecticide applications will hurt both pests and beneficial insects, so chemicals need to be used with care. Always read the label and follow the directions exactly for safety.

While working in Missouri, Althoff said that corn and soybean farmers had a lot of questions about Japanese beetle defoliation. Many times, the beetles were only clumped together in specific regions of the field, though.

“They aggregate,” she said.

“That’s where the populations are noticeable,” said Potter in Feb. 28 phone interview from Lamberton. “As you go west, the populations are less. I’m expecting they might eventually get here, but how bad they will be, I don’t know. We’ll have to wait and see.”

He suspects that Japanese beetles might not thrive in a dry prairie ecosystem.

The defoliation on soybeans is hard to quantify in terms of economics because the beetles feed on the tops of plants.

“There’s research going on in Minnesota on soybeans – looking at defoliation and combinations between Japanese beetles and soybean aphids,” Potter added.

Potter suggests farmers keep an eye out for the Japanese beetle – it is not hard to identify – as well as the soybean gall midge, the brown marmorated stinkbug, and the emerald ash borer.

The prominent insect pests in Minnesota’s cornfields remain the corn rootworm, and for soybeans, the soybean aphid.

“Soybean aphid populations have been down the last few years, but that is still probably our most consistent pest in soybeans at this time,” Potter said. “You get the right conditions and insects can be off to the races pretty quick.”

“Japanese beetles are definitely an area that we are still exploring and figuring out exactly what is going on with these systems,” she said. “It’s an area that researchers are working on.”

June 21, 2022, LAMBERTON, Minn. – Several reports of true armyworm infestations have come in from a fairly wide area in southern and into west…

In a back field northeast of Brooten, Minn., entomologist Anthony Hanson, University of Minnesota Extension educator, strides out to a black l…

A Minnesota-based tech company is offering three new products that can help identify field conditions from above.

Minnesota farmers finally had a window for planting. For May 23-29, farmers had 5 days suitable for fieldwork.

Emily Althoff, Ph.D. student at the University of Minnesota, College of Forestry