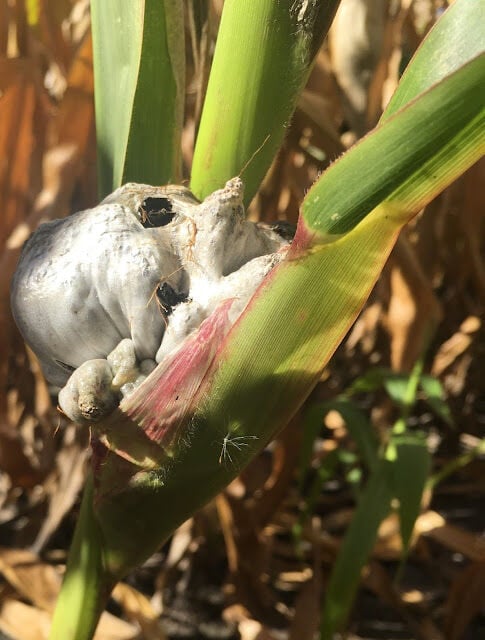 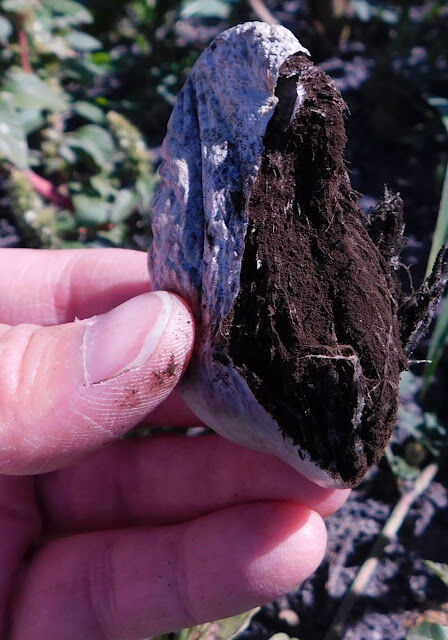 Unlike many other fungal pathogens that cause disease, those that cause the rusts, tar spot and smut produce spores or fungal fruiting structures can be easily identified on plants whose leaves have already died.

What is it about 2021 that favored smut?

The 2021 extreme to exceptional drought conditions that prevailed in the northwest crop reporting district favored common smut infections in some hybrids in some fields. More smut was observed than in a typical year, including several fields in which one could not find a single ear without the characteristic signs of smut infection.

Corn smut is caused by a soil- and residue-borne fungal pathogen called Ustilago maydis. While infection can occur in all above-ground plant parts, young and actively growing above-ground growing points and wounded tissue are particularly vulnerable (Pataky, 2016). Kernels can’t become infected after ovules have been fertilized and so environmental conditions that result in incomplete fertilization can favor infection. Significant plant stress can sometimes result in receptive silks and pollen-shedding anthers not being present at the same time; in 2021, the historic drought resulted in poor fertilization in some fields and hybrids, predisposing plants to infection by the fungus that causes smut.

When it infects an ear, the fungus that causes common smut stimulates the surrounding corn cells to divide more and grow larger than they would if infection hadn’t taken place. Eventually, unfertilized kernels infected with U. maydis can grow as large as a golf ball with a light to dark grey color (Figure 1). As common smut galls mature, the outer surface of the galls can dry and crack open, revealing dark spores of U. maydis within (Figure 2).

Unlike Fusarium, Gibberella, or Aspergillus ear molds, common smut on ears is not associated with mycotoxin contamination of grain, and post-harvest infections do not take place. To avoid irritating your respiratory system by inhaling U. maydis spores, be prepared to wear a filtering face piece respirator (ex. N-95) when working with smutty corn. Also be prepared to get some odd looks from neighbors as you harvest smutty corn because a large black cloud of U. maydis spore will likely trail behind your combine.

What if I planned to feed this corn to livestock?

With the tight supplies of forages in the region going into winter, livestock producers are in search of any opportunity to expand their supply and may wonder whether corn with common smut can hurt their livestock. Researchers in Texas created different batches of corn that varied in how much corn smut was present: 0% 50% and 100% of the total (Cole, et al. 2001). They then ensiled and analyzed the different batches for chemical composition, livestock palatability (whether ruminants ate it) and digestibility (how well livestock were able to meet their needs and make gains).

As the percentage of corn infected with smut increased, the fiber content the silage increased and the non-structural carbohydrate content decreased. Cole et al. (2001) noted that these changes in chemical composition are similar to changes that take place during drought conditions; both smut and drought can reduce grain yield, where much of the non-structural carbohydrate content tends to accumulate. More smut also resulted in lower total digestible nutrients and net energy, leading to higher dry matter intake by the sheep used in this study.

While the research showed that the wethers preferred smut-infested to uninfested silage, the researchers were unable to determine whether this preference was caused by differences in taste or chemical or physical characteristics. When extrapolating the effect of ensiling smut-infected corn to feed to livestock, the researchers calculate that the total digestible nutrient value of corn is reduced by 0.5% for each 10% increase in smutty plants (Cole et al. 2001).

How can I avoid having smutty corn in the future?

Many different means of common smut control have been proposed, but only hybrid resistance has proven practical and effective (Pataky, 2016). As economically important common smut epidemics are uncommon, most seed company catalogues do not include a rating for common smut resistance/susceptibility. For those with corn crops that got nailed with common smut in 2021, make a note of the hybrids that proved susceptible and avoid planting them if available the next time you want to plant corn in that field. It also wouldn’t hurt to mention to your seed company reps your desire to plant common smut-resistant hybrids as they may have access to internal information regarding common smut susceptibility that can help to inform your selections.