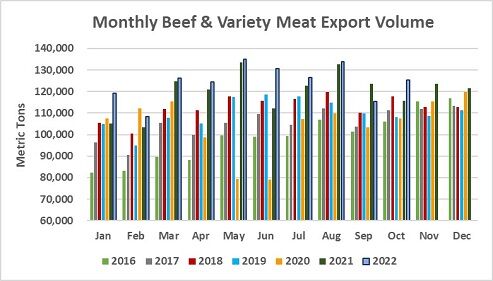 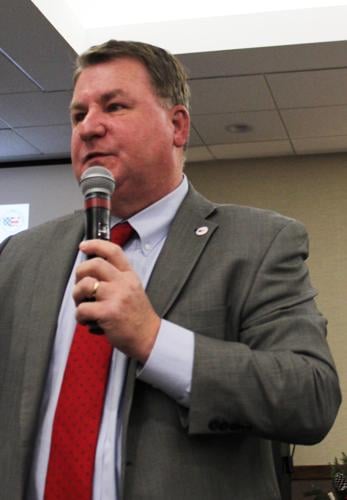 WILLMAR, Minn. – Despite challenges, U.S. beef has sold well in other countries.

“We could be close to a $12 billion export value on U.S. beef when it comes to December this year. That’s exciting,” Hinners said in early December. Official USDA numbers were available through October. “It wouldn’t happen without the financial investments through your checkoff and through the support of national organizations like the National Cattlemen’s Beef Association.”

The USMEF has been around for 46 years and includes about 300 members. About 30 staff people work in Denver and about 85 people work around the world to increase the export value and profit opportunities for U.S. beef, pork, and lamb.

From January through October, U.S. beef exports, plus beef variety meat exports, were up about 18 percent from a year ago to a little over $10 billion. Sales in October alone were just shy of $1 billion.

“We’re not sending out those good ribeyes all the time – that New York strip that we all like,” he said. “The story is that some of the things we are sending outside the U.S. is what we don’t eat traditionally.”

Variety meats are significant in the export market. These include the tongue, lips, heart, liver, kidney, stomach, navel and small intestine. The U.S. exported over $1 billion in variety meats in 2021. Some countries slice, dice, and cook rich variety meats.

In Japan or South Korea, for instance, the beef navel is cooked. Two or three ounces is served with rice, Hinners said. He’s seen beef tongue in Japanese markets, too – sliced thin like salami – and sold for $22 dollars per pound.

The muzzle of a steer or heifer goes into taco meat in Mexico. Mexico’s purchases are down a little, he said, but the USMEF is allowed to demonstrate their products with importers.

“We are going to outperform Mexico – just due to the product that we have, the high-quality choice products,” he said.

Egypt and Africa food buyers are interested in beef liver, he added. Billboards on the sides of semi-trailers are a good way to spread the message of U.S. beef in Africa, he added. Africa doesn’t know much about preparing or eating beef. There are ways that Africans can use variety meats and other products to stretch their food budget while getting a high-quality protein.

“I think we have a great opportunity to sell our product at a higher level if we can continue to market it in a different way,” he said.

The U.S. has become the meat supplier of choice for many reasons. U.S. beef has good food safety and quality. It tastes good. U.S. meat is harvested from livestock raised on quality farms.

When U.S. beef is sold internationally as a chilled product, rather than frozen, there are additional premiums available, Hinners said. Chilled beef is valued at $1.77 per pound over frozen in Japan – and at $2.54 over frozen in Taiwan.

“We are trying to build value into the cattle industry,” he said.

Hinners said that 20 different countries are vying for shelf space in Japan. He wants consumers there to think of American high-quality beef for dinner. Some of the USMEF advertising campaigns include clips of U.S. farm families working on their farms. Another campaign introduced Japanese consumers to barbecue. Little packets of barbecue sauce are added to the outside of the product for the consumer to try. Sometimes packets of au jus are added for free.

“We know there are issues out there, the stronger dollar makes it difficult, but it’s phenomenal that we can do as much as we can,” he said.

South Koreans love highly-marbled U.S. beef. The annual per capital consumption of U.S. beef is 10.5 pounds per person. It is a $2.3 billion market.

Hinners said that in November 2021, 51 percent of South Koreans ordered meals via their cell phone while 49 percent went to a grocery store.

The USMEF aggressively worked with every online grocery platform in South Korea to remain significant to consumers. Barbecue was also marketed to South Korea.

Taiwan is another market that is open to U.S. beef. While the Taiwanese don’t always have the money to buy the top cuts, USMEF focuses on less expensive U.S. beef. That can include the knuckle, as well as the tri-tip, chuck ribeye, flank and brisket.

“We are going to expand into different markets that haven’t been traditional beef consuming markets,” he said. “China is risky, but they are a $2 billion market.”

“I think when you look at the future, it’s bright for U.S. beef,” Hinners said. “Hopefully we can rebuild our cow herds and continue to have as much product as we have.”

“It’s an exciting venture. Currently, we export about 15 percent of our production,” he said. “Certainly, we’d like to see the continuing export of those variety meats and adding value.”

Looking for a lady in her 40's