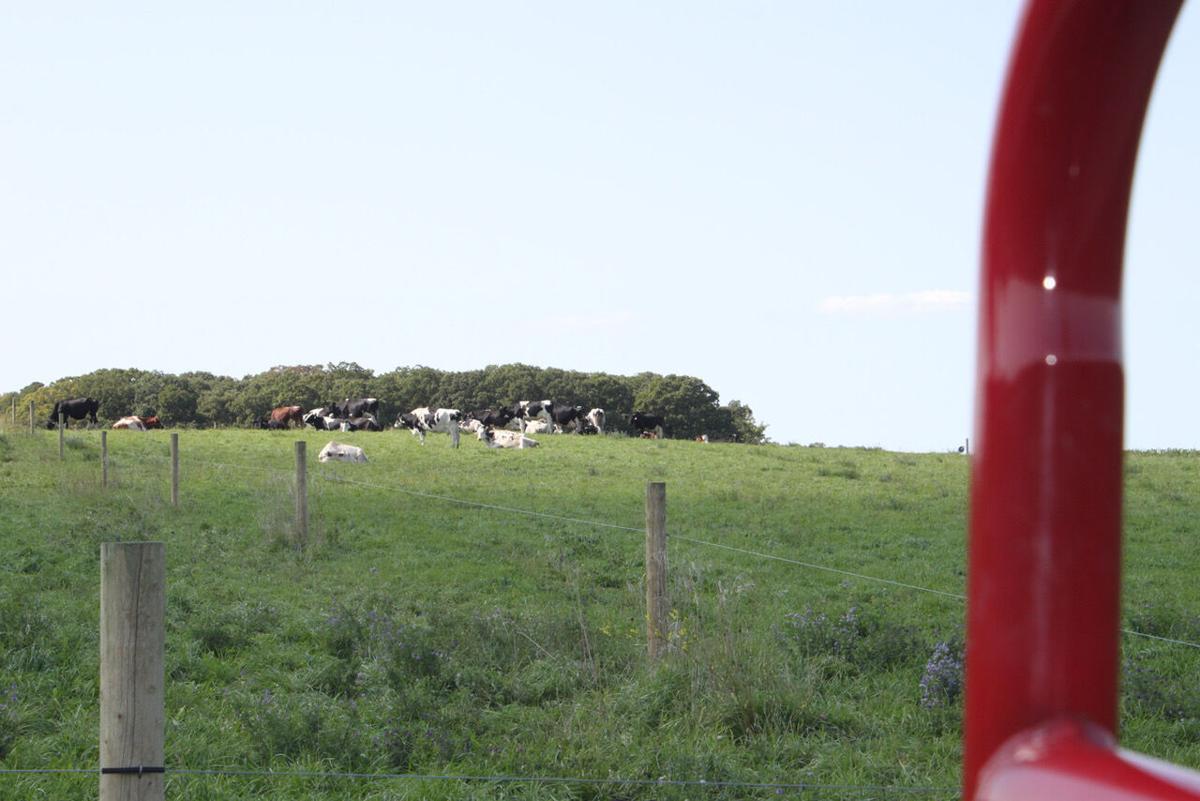 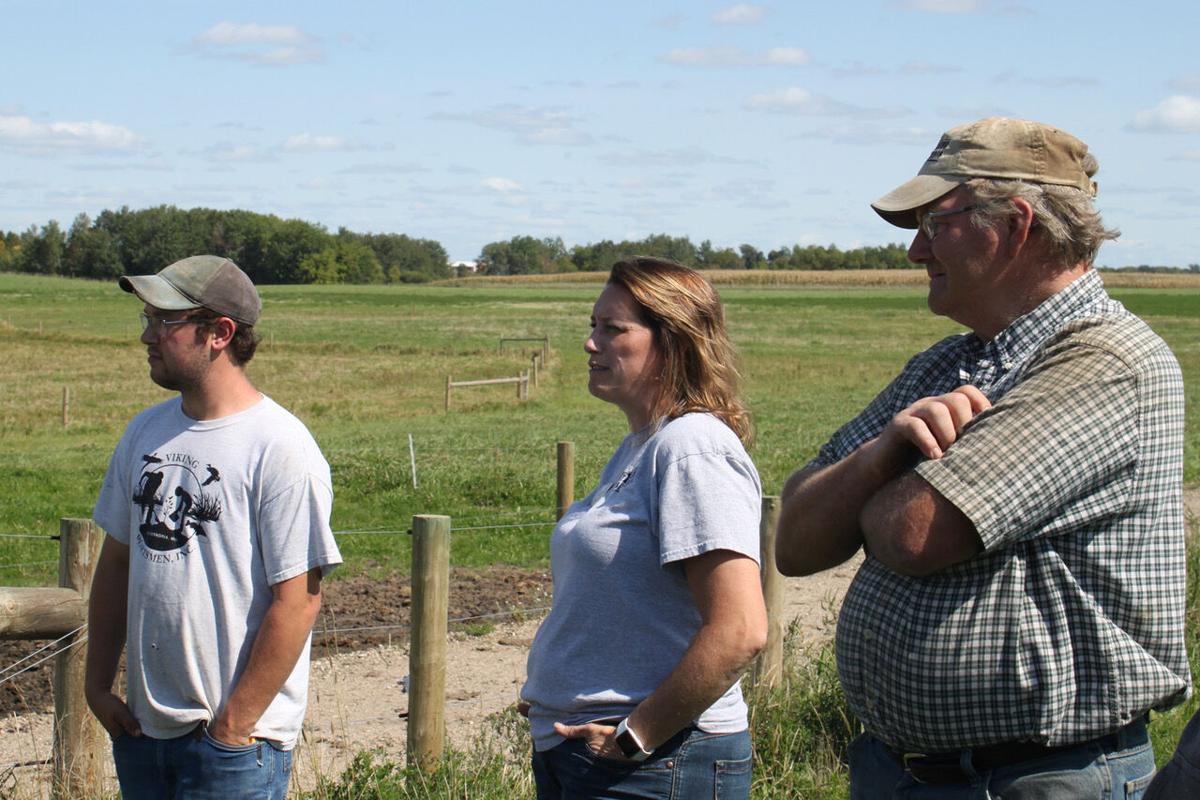 BRANDON, Minn. – On a beautiful September day – the kind of day where neither man nor beast belongs inside – Jack Schouweiler’s cows rest quietly on a grassy knoll.

Their stomachs are filled up with grass, alfalfa, and clover, so all there is to do is chew their cuds and soak up sunshine until it’s time for milking.

On this poetic September day, the Sustainable Farming Association (SFA) and the Dairy Grazing Apprenticeship program (DGA) are holding a pasture walk at Jack’s farm. The event is hosted by Angie Walter, SFA/DGA Central Minnesota education coordinator. The purpose of the pasture walk is for graziers, dairy farmers, and interested others to connect and share experiences.

Jack is 22 and in his first year as a full-time dairy farmer. He’s milking about 70 organic cows at two locations – eventually all the cows will be at his farm.

He puts in 18-hour days, but so far, his farm is successful.

Involved with SFA and DGA, Jack is mentored by and is farming in partnership with Master Dairy Grazier Ben Wagner. Together, Ben and Jack are running about 440 acres of cropland and organic pasture, plus livestock.

SFA, DGA, and other private and government groups helped him apply for cost-sharing programs.

According to the DGA, Jack is “leveraging Environmental Quality Incentives Program assistance from NRCS and Clean Water Funds from the Minnesota Board of Water and Soil Resources.”

Jack started milking in his renovated parlor on May 1, 2021. He also transitioned 80 acres of pasture to organic production.

A gravel walkway leads north of Jack’s farm and to the 80 acres of fenced organic pastureland. Constructed a year ago, the walkway has bigger rock at the bottom, covered with geotextile, and gravel over that.

A 16-foot red gate is opened to gain access to a quarter-mile long walkway. The long walkway opens to several paddocks that vary in size from 7-35 acres. The paddocks feature wooden posts with high tensile electrified wire.

Before the fencing was installed last year, Jack hired a tile installer to dig out a 6-foot-deep trench. Rocks were removed, and then the water line was laid down in the trench and buried. Up to three water tanks are available to the cows in each paddock.

Designed for 80-100 milking cows, the 80 acres were home to 35 cows plus 30 heifers during the 2021 growing season. That worked out great with the drought. Jack and Ben have been feeding a total mixed ration per cow of 12 pounds of corn, 1 pound of mineral, 16 pounds of hay, 30 pounds of corn silage and pasture ad libitum.

Jack put the cattle out on pasture early in the spring when the grass/alfalfa/fescue mix was 6-8 inches tall. Often, graziers wait until the vegetation is taller, but he had good growth and a lot of acres to graze.

A wide variety of farming practices were used across the 80 acres.

• Moving the cows and heifers quickly through the paddocks in the spring of 2021 to stimulate vegetative growth.

• No-till drilling oats in July when Jack expected 1-inch of rain. Only 0.1-inch arrived, and the oats didn’t germinate. Then in August, the region received 2 inches of rain. Oats and sorghum are now growing in those seeded pastures.

• Keeping cows in a drought-stricken paddock where pigweed grew rampantly. The cows ate pigweed for 2-3 weeks. “They were still milking and had a full belly,” Ben said. “It’s free food.” Jack added that the cows were very “loose” when eating pigweed.

“That’s the nice thing about diversity,” Angie added. “Sometimes it might not grow this year, but when conditions are right, the seed is sometimes there. It finds its niche.”

• Haying portions of the paddocks.

• Fencing in 35 acres of slough – normally too wet for grazing, the paddock was used extensively during the drought of 2021.

• Using a sacrificial pasture as needed during drought to remove stress from vegetation on other paddocks.

• Grazing as late in the year as possible. Grazing alfalfa after frost hasn’t caused any winter kill issues for Jack’s or Ben’s operation.

Jack appreciates having so many options for using the 80 acres of paddocks for the dairy operation. As a young farmer, he can easily think through what’s available to him, and he’s not afraid of hard work to accomplish his tasks.

“It’s a guessing game,” he said. “You don’t know until after you’ve done it if you made the right decision.”

This type of adaptive grazing system is forgiving, though, and assures the dairy farmer they will almost always have enough feed for the herd.

“On these pasture walks, you learn you can try things, things that you can do on your own farm. All of us as farmers are still learning, and probably will forever, which is not a bad thing.”