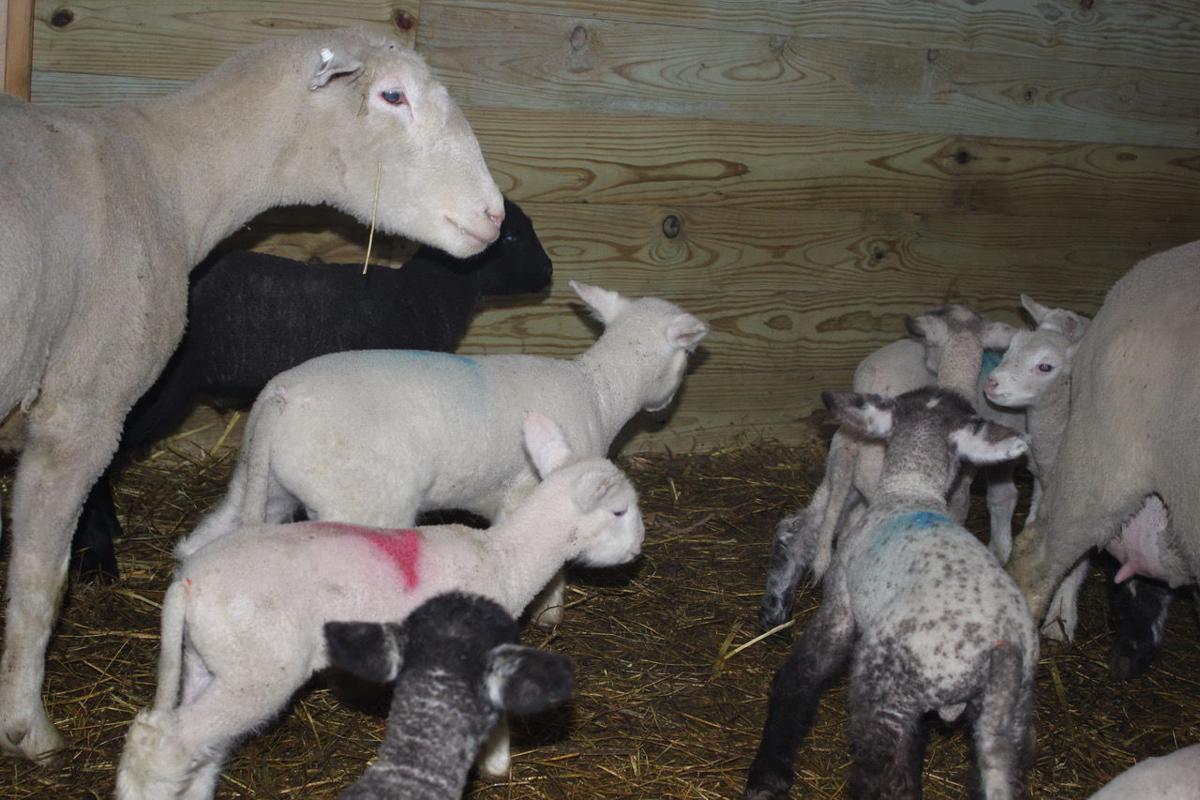 Lambs in the Schoenfeld back pen had plenty of milk and showed typical young lamb behavior. Tails are banded as soon as the lambs show they are non-stressed. The number one cause of death in lambs is starvation, and Kami Schoenfeld does a great job watching over the ewes and lambs. 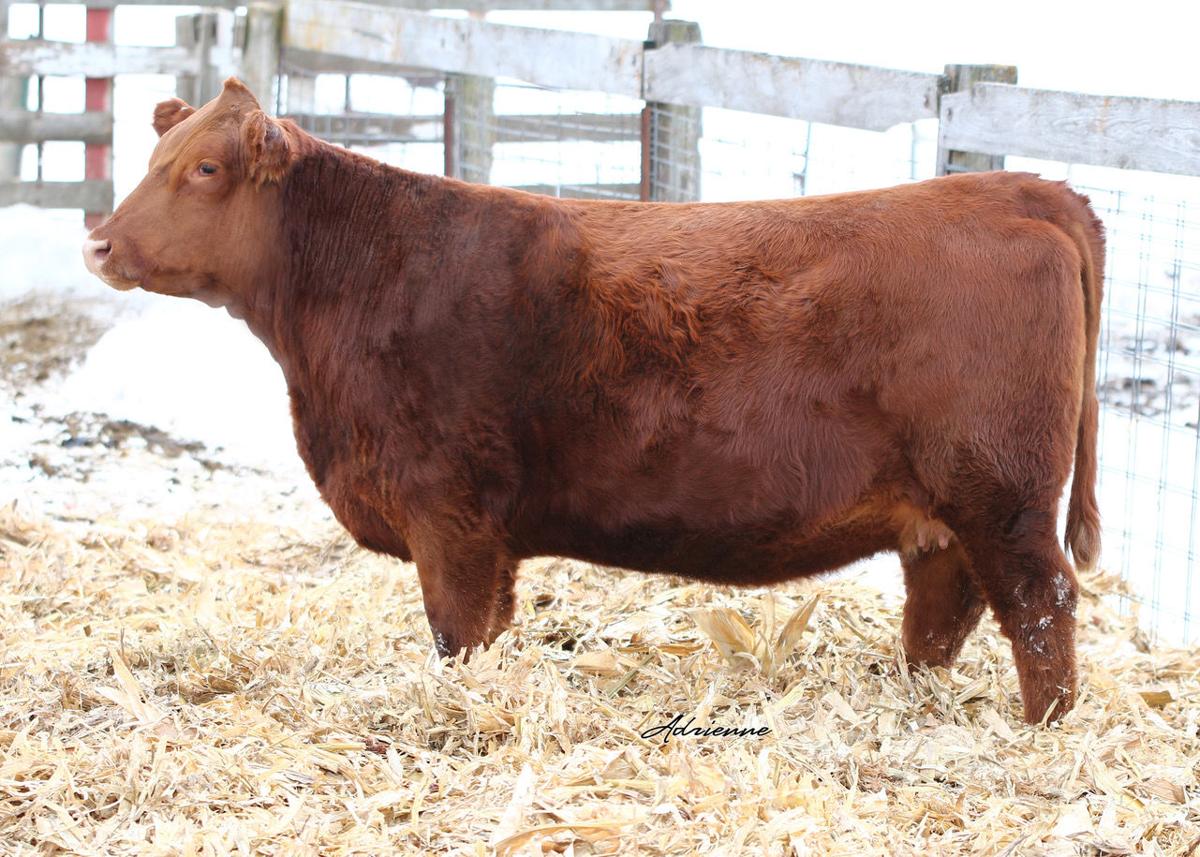 Lambs in the Schoenfeld back pen had plenty of milk and showed typical young lamb behavior. Tails are banded as soon as the lambs show they are non-stressed. The number one cause of death in lambs is starvation, and Kami Schoenfeld does a great job watching over the ewes and lambs.

DAWSON, Minn. – The new lambing barn at Kami and Mark Schoenfeld’s farm was a happening place in early February.

The 42- by 48-foot barn was ready for ewes just ahead of Christmas. Since then, the Schoenfelds have focused on learning how to manage the barn for ewes and now lambs.

“They say you can always build larger, but then you have to think more about ventilation and heating too,” said Kami on Feb. 3, as she gave a tour of their new facility.

The main portion of the barn had four lambing jugs, as well as a pen for closeup ewes, a pen for ewes and their older lambs, and a pen for the ewe lambs that were not due for a while.

“Now that the back pen is getting full of families, the front pen is going to have ewes and lambs too,” Mark said. “We’re going to have to open it up so the lambs can get to the creep feed.”

The ewes were eating high quality hay like crazy and were very comfortable in the 42 degree barn. Even though the windchill approached 10 below, the ewes produced enough heat that fans kicked on to exhaust warm air out of the barn. Confinement hog barn-type vents in the ceiling helped to draw cold air in as needed.

The barn includes a large heated room with a poured concrete floor, and bright white tin on the walls and ceiling that make for a clean and finished appearance. The heated room is available for veterinary work on baby lambs in the winter. During the show season, the room will be used to work with and groom show calves and lambs.

The Schoenfelds believe their boys, Colton, 7, and Braxton, 4, will benefit by having the grooming area available as they begin to show livestock. Kami hopes they will always remember to be grateful to have such a nice fitting room, and that not everyone gets to start their showing career with great facilities.

In early February, Kami closely watched the ewes and lambs. Four sets of twins were born in four hours over one night, so there wasn’t much sleep. One of the ewes was seven years old, and her udder had fallen. The set of twins she was raising were to be her last, and Kami kept a close eye on the lambs to make sure they were getting enough milk.

Another ewe had triplets and decided she only wanted two of them. Kami tried to graft the third lamb onto a ewe that had lost a lamb. Unfortunately, the ewe wanted nothing to do with the “orphan,” so the Schoenfelds had a bottle lamb. The lamb was definitely worth saving – it happened to be a beautiful black wether that will make a nice market lamb to show this summer.

The new barn has four garage doors to allow for many configurations and uses throughout the year. In the warm months, the entryways will lead out to various pens for show calves and club lambs.

Kami and Mark talked with many sheep producers before building their barn, and 99 out of 100 suggested garage doors. Only one person felt sliding doors were better, so the Schoenfelds hope the 99 percent are correct.

The main portion of the barn had room to park the skid loader – Mark’s righthand helper. He used the skid loader to bring big bales of hay or straw into the barn, and also remove snow from Circle S Cattle and Club Lambs driveways. Keeping the skid loader inside the new lambing barn has been appreciated, Kami said.

The Schoenfelds were anxiously waiting for their heifers to start calving. The first were expected on Feb. 5.

“We have a group of calves that are due,” Mark said. “Breeding them to low birthweight/calving ease bulls, you’d expect them to come a little early, but we haven’t had any drop yet.”

The cow herd is kept at the Harvey and Gladys Hastad farm.

“We put them up in what we call the TLC pen,” Mark said, speaking of the close-up pen at his in-law’s home. “We got the heifers sorted off into there and we can get them right into the barn if something’s going on. Particularly with heifers, we’ll pen them up for the first 24 hours just to make sure everybody’s got it figured out.”

The Schoenfelds mounted an older-style camera in the Hastad barn. They’re hoping that “spying” on the new moms – rather than standing near the calving pen – will help cows focus on getting their calves to nurse. The cows won’t be busy trying to protect their young ones from humans.

“Now with a camera in there, we can sit in the house and see if we can catch them nursing,” Mark said.

He added that Circle S Cattle sold all three of their bulls, so that was a nice task to have completed. The Schoenfelds were looking forward to attending the 47th Annual Minnesota State Simmental Sale on Feb. 22, noon, at Haas Livestock, Cannon Falls. They were proud to be selling CSCC Fine Wine 022 F814 – a Simmental/Red Angus cross born Feb. 24, 2018. The heifer’s mother has reared four heifers in four years, with genetics now playing a role in the Circle S Cattle Calves herd. The sale heifer is bred to calf on March 10, and her calf was sired by Hook’s Black Hawk 50B on May 31, 2019.

“This red beauty is going to be a solid cow in any program,” wrote the Schoenfelds when describing this heifer specifically bred for the state sale. “Her calf will have value both on paper and phenotypically.”