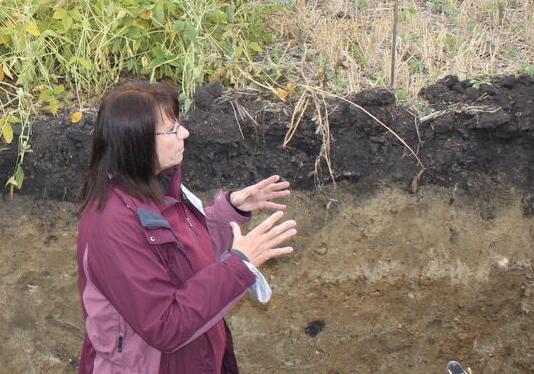 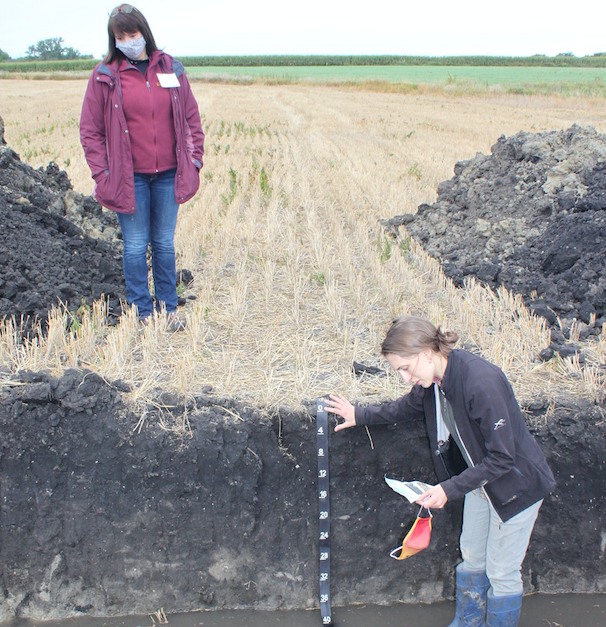 BARRETT, Minn. – A simple visual is sometimes the best way to grasp a concept and create real change.

A “fried egg” is a brain on drugs. A “white mustache” reminds us to drink milk. A “Green Giant” encourages families to buy more vegetables.

“Your field doesn’t evenly move soil, it loses it on the shoulder slopes a lot faster. It gathers down in the bottom slopes,” reiterated Jodi DeJong-Hughes, University of Minnesota Extension educator in tillage and soil health.

She’s found that digging two 3-foot-deep soil pits – one on the top and another at the bottom of a farmed slope – visually tells the story of downward soil movement.

In 2014, Chad Rollofson and his family converted 10 acres of their family farm into a no-till and cover crop demonstration site. There are 10 one-acre plots of which six are managed with no-tillage, cover crops, and a rotation that includes wheat, while the remaining four plots are managed with conventional tillage and a corn/soybean rotation.

The site gives Rollofson and others the opportunity to determine if cover crops are viable for the region. In addition, the site compares and measures soil health over time under various systems, as well as the economic costs and benefits.

Visitors are welcome to tour the site, located east of Barrett.

DeJong-Hughes and Blair measured 6-10 inches of topsoil in the soil pit on top of the slope.

The researchers remind everyone that just one dime’s thickness is equal to 5 tons of topsoil/acre moved.

DeJong-Hughes got the idea for digging two soil pits after she learned of research conducted about half an hour to the south of Barrett. Researchers learned that using moldboard plow on highly erodible sloping land near Cyrus, Minn., moved 27 tons of soil per acre in a year.

Both areas sit on the western edge of Minnesota’s “Lake Country.”

“We have to be really careful with our soil; because honestly some of the best soil in the whole world is in this region,” DeJong-Hughes said. “You cannot rebuild it, and you don’t want to lose it with the wind and water erosion.

“How you do it is by reducing your tillage, the number of passes, and the aggressiveness of your tillage tools,” she continued. “With all of the choices and equipment we now have, there is no real reason to use a moldboard plow (or disk) anymore.”

She explained that in clay loam soil, each individual particle of clay is microscopic in size.

“What you see is a mixture. The individual particles can blow away,” she said. “Those really windy days – over 13 miles per hour – can start picking up soil. When you see those skies that are gray, and it’s windy – that’s your clay going away.

“It can move for thousands of miles and go into the Atlantic Ocean, and it’s our best soil. Our topsoil is blowing away.”

Water moves clay, too, as does tillage.

Other parts of soil – sand and silt particles – bounce across the ground and dislodge other particles to multiply the effects of wind erosion.

The way to slow down erosion is by building soil structure, DeJong-Hughes said. Living roots from cover crops hold the soil together, and reduced-tillage plus surface residue keeps it in place.

DeJong-Hughes and her associates saw a number of differences in the soil characteristics of the two pits.

Carbonates were much higher in the top soil pit compared to the bottom soil pit.

“That means some of those carbonates are actually coming with the soil that is being eroded up on the slope and then moving down into this area,” she said.

“Above 3.0 percent OM, herbicides work differently than below 3.0 – also the same with the pH – microbes will work differently,” she said. “Microbes like more neutral pH, and also like high organic matter, as a food source. When you have more of an even soil type, you don’t have to variable rate things as much.”

Another important area of research involved carbon sequestration – capturing carbon in the soil rather than allowing it to move into the atmosphere. Soil carbon helps sustain biological activity and generally helps improve all aspects of soil quality and productivity.

About 50 percent of OM is carbon.

DeJong-Hughes and Blair also explained how soil color can be used to interpret important differences in soil properties. Soils rich in organic matter tend to be dark brown or black – a common characteristic of rich and fertile topsoil. Eroded soils show a much lighter color at the surface, because they typically have lower organic matter.

In addition, soil colors can reveal important information about how much of the soil profile is saturated with water throughout the year.

The USDA-ARS located in Morris, Minn., wanted to learn what would happen if they moved 6 inches of the valuable topsoil back up the slope.

What they discovered was yield improved at the top of the slope, but yields dropped at the bottom due to a loss of soil structure where soil was scraped away, according to DeJong-Hughes. The approach of using heavy equipment and diesel to move topsoil may work, she added, but many soil health strategies would be required to regenerate the soil and keep it in place.

“Rather than have the water move swiftly downhill, residue and living roots help infiltrate the water into the soil, so you don’t have that movement of soil carried downhill,” she said.

Any changes in tillage practices need to be made over time, she added, because totally adopting no-till or conservation tillage in a single year has a very steep learning curve.

DeJong-Hughes added that in future field day events, look for upslope and down slope soil pits for more opportunities to see what goes on beneath the surface.

Watch for details on the Dec. 15-16, 2020, Soil Management Summit scheduled for online.