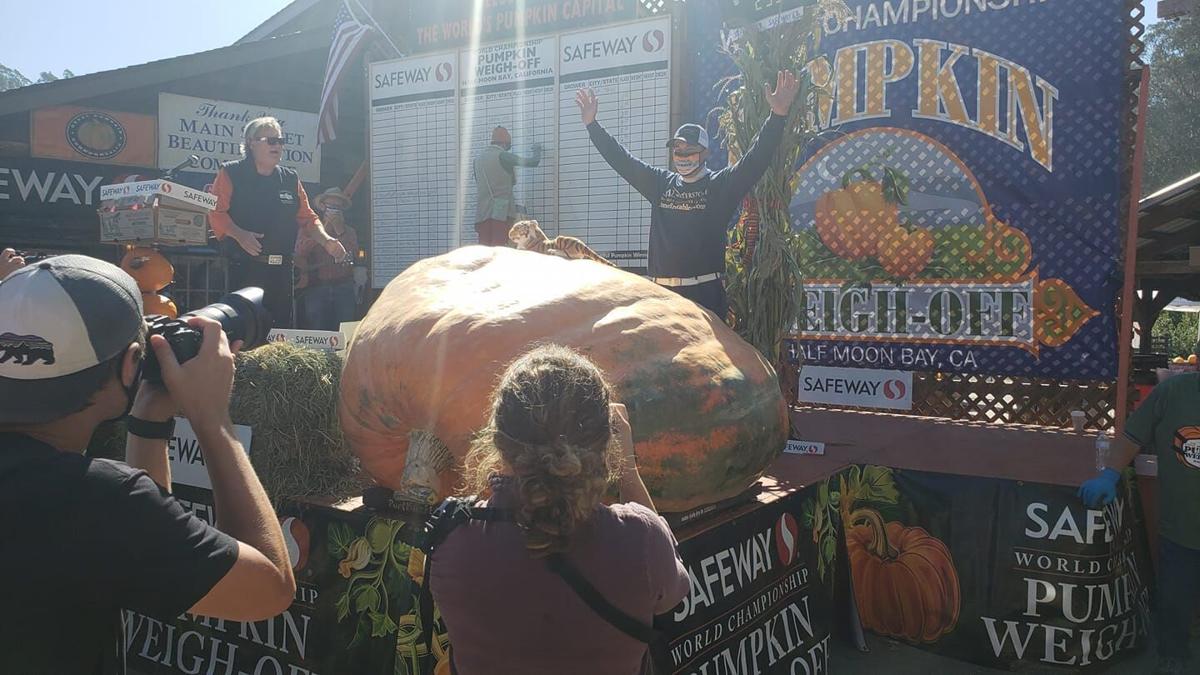 Travis Gienger won the 2020 Safeway World Championship Pumpkin Weigh-Off held in Half Moon Bay, Calif. His 2,350-pound pumpkin, named Tiger King, was raised on a few acres of soil in Anoka, Minn. The first place finish earned him $16,450, or $7 per pound. Submitted photo. 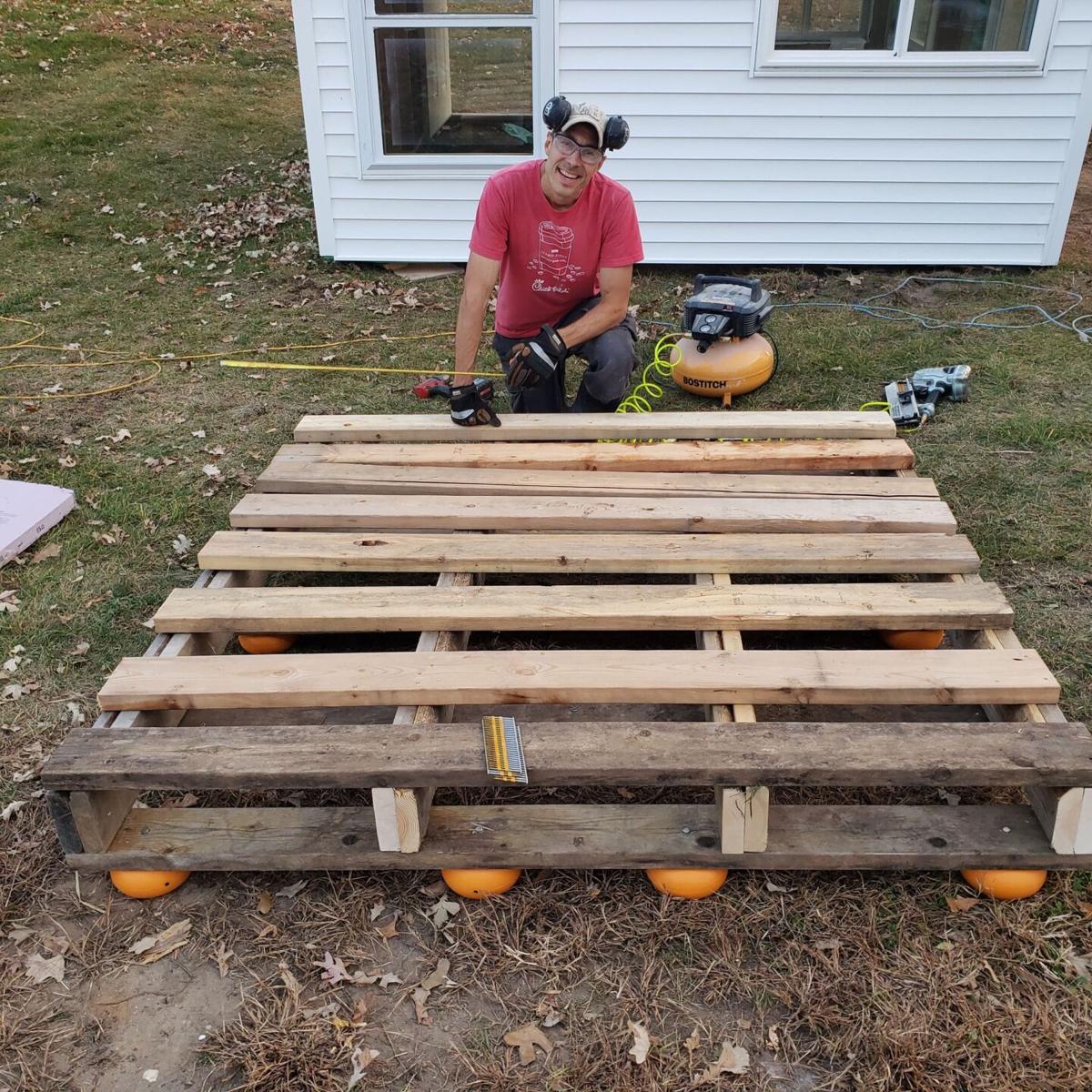 Travis Gienger won the 2020 Safeway World Championship Pumpkin Weigh-Off held in Half Moon Bay, Calif. His 2,350-pound pumpkin, named Tiger King, was raised on a few acres of soil in Anoka, Minn. The first place finish earned him $16,450, or $7 per pound. Submitted photo.

Those who plant the seed, the tree, or the bareroot know that it takes more than soil, sunshine and rain to produce a good crop.

It takes pride in a job well done and love for what you do.

We recently learned of Minnesota-native Travis Gienger, 40, who raises giant pumpkins, and his brother, Brent Gienger, who is a proud Veteran and has volunteered with Veterans Healing Farm, of Hendersonville, N.C.

Travis’s agronomic practices include spoon-fed foliar fertilizer and watering the winning pumpkin plant up to 10 times daily. He got up every hour through the nights of Sept. 9-10 to take care of the growing pumpkin when temperatures dipped to freezing.

Then he and three others used a truck and a flatbed trailer to haul the pumpkin out to California for the national contest. The three largest pumpkins were held up to be weighed last in the annual contest. Tiger King was the very last pumpkin weighed and came in at a remarkable 176 pounds over the next pumpkin.

With such a remarkable project and taking it to such lengths in 2020, we decided out of the blue to ask Travis if he knew of any veterans that were involved in farming.

Something about his attention to detail, determination and horticulture inclinations suggested he might know of someone to feature ahead of Veteran’s Day. He also teaches horticulture and landscaping at Anoka Technical College.

He mentioned that his brother, Brent, is a Veteran who has volunteered with a worthwhile cause, the Veterans Healing Farm, of Hendersonville, N.C.

In a phone interview with both brothers, we learned that the brothers support each other’s efforts.

They work together at Waterstone Fire Tables, which is Travis’s company based out of Anoka. They find huge, beautiful rocks. Then, they slice and polish them, and install fittings for propane or natural gas hookups – as well as water features. The resulting fire tables are luxurious additions to outdoor landscapes and gardens.

“Yes, I have volunteered with Veterans Healing Farm,” Brent said. “The other one I volunteer with is Team Rubicon.”

Veterans Healing Farm serves those who were active in the U.S. Armed Forces, by “growing and donating high-quality fruits, vegetables and flower bouquets. These are delivered to veterans and their caregivers free of charge. The farm also supports veterans by offering workshops on innovative gardening techniques and fosters a thriving micro-community of veterans and civilians who cultivate good health,” according to their website.

Team Rubicon, based out of Los Angeles, organizes volunteers – many of whom are veterans – for a variety of projects. These projects include helping individuals and communities that are struck by hurricanes.

“This is a good resource for other likeminded veterans that have – in addition to the farming – other creative-minded opportunities,” Brent said. “They are just looking to disconnect from the stress and a way of bonding with people that have gone through similar experiences through community service projects, through helping other places that are in need.”

Growing up, the Gienger brothers enjoyed going to the Minnesota State Fair with their parents and grandparents. Travis got bit with the competition-bug for growing giant pumpkins.

“It’s just so neat to be a part of what Travis has going on here,” Brent said.

When volunteering at the Veterans Healing Farm in North Carolina, Brent was amazed at what veterans were learning.

“They are not one dimensional,” he said. “They are awe-inspiring.”

The farm grows hops that are used to make beer, and they teach veterans how to brew. The beer is sold in local craft breweries.

Clotheslines are used in the apple orchard to grow trees that can be picked by someone sitting in a wheel chair. Veterans learn how to make delicious apple cider and hard cider.

There are campfires in the evening after the day’s work. Veterans can make cigar box guitars and learn how to play them.

The strawberry patch at Veterans Healing Farm is placed within an American flag design that serves as a source of pride.

As a veteran with a disability himself, this opportunity to volunteer his skills at Veterans Healing Farm was one of the most inspiring sights he visited on his most recent vacation.

Back home in Anoka, the Gienger brothers were getting ready for the Anoka Halloween parade. Anoka is known as the “Halloween Capital of the World.” The 6-foot 6-inches by 6-foot pumpkin was carved into a tiger for the parade.

Then the seeds will be sent to people to want to raise giant pumpkins.

Travis has been getting requests for seeds from people around the world, and he’d be more than happy to send a seed or two to veterans who’d like to grow giant pumpkins, too. All it takes is a visit to his Facebook page asking for some seeds.

After all, growing things is about more than planting the seed, and getting rain and sunshine. It’s about pride in a job well done and love for what you do.