Jennie-O Turkey Barns destroyed in May 12 Derecho. A turkey barn location was razed by the May 12 derecho near Appleton, Minn. The barn had no turkeys due to high path avian influenza. 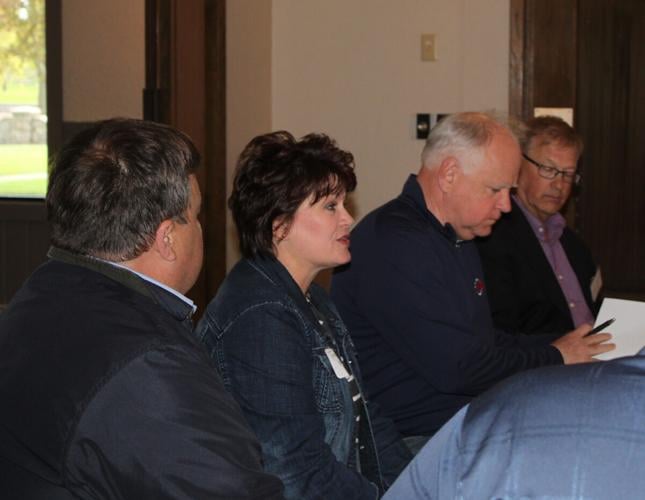 Gov. Tim Walz took notes while Benson Mayor Terri Collins welcomed local leaders and first responders to a discussion of the May 12 derecho that caused millions of dollars in damage. Also seen are Commissioner of Agriculture Thom Peterson (back turned) and Benson’s acting city manager. Photo by Andrea Johnson.

From Nebraska, to south of Sioux Falls, S.D., to north of Alexandria, Minn., late afternoon emergency alerts sounded on May 12, 2022, when a derecho with winds of 70-100 miles per hour raced across the region.

Another round came through around 9 p.m., but not as powerful.

Left in the storm’s wake were downed trees, powerlines, and towers resulting in no electricity, internet, or phones.

As power/communication was restored beginning the next day, anecdotal reports began filtering in by word-of-mouth and social media – a turkey barn was destroyed, a shed was down on U.S. Highway 59, and an old country church was destroyed.

Most homes were spared.

The storm damage was severe but mostly limited to farms. Unlike big storms in the past, there was no TV van from the Twin Cities out to tell the story to the metro area or legislators.

Instead, the rural regions relied on local radio, local newspapers, county Emergency Management staff, and social media to get the word out about the damage.

Hearing from Jim Ostlie, who works in marketing for the Minnesota Department of Agriculture and lives in the area – as well as other reports – Commissioner of Agriculture Thom Peterson and Gov. Tim Walz traveled out to Benson, Minn., on May 18 to learn more.

Among those with damage were turkey producers for Jennie-O Turkey Store, said store president Steve Lykken. More than a dozen barns were destroyed across the region.

“About $15 million in infrastructure (was damaged),” Lykken said at the meeting with the governor. “We have a really large site that is near Appleton (Swift County), we already had high path (avian influenza and was empty of birds) and it was completely razed.”

He added that 70-80 full-time employees were affected by turkey barn damage.

Swift County Emergency Management Director Bill McGeary added that hundreds of buildings were damaged; while Swift County Sheriff John Holtz said he’d been contacted by many farmers about their damage.

“They are waiting to turn (the claims) into their insurance, but the adjusters are not coming out because they are already busy,” Holtz said.

McGeary added that he had lost count of all the phone calls he had received.

In Lac qui Parle County, an official wind gust of 94 miles per hour was measured, with estimates of 100-110 miles per hour north of Madison, Minn. The initial estimate for public infrastructure (not businesses/homes) was $1.2 million. The local rural electric cooperative had at least $750,000 in repairs, over 450 homes were affected, 3 were destroyed, and over 50 grain bins were destroyed at farms and at cooperatives, according to Stacy Tufto, Lac qui Parle County Commissioner.

“I visited a site yesterday where the cattle were in the barn, but the roof wasn’t there,” Greiner said. “All the bins were gone and there are miles of steel through the fields.”

University of Minnesota Morris had at least $450,000 in damage, she added, with at least another $750,000 in damage to structures owned by the city of Morris. The Morris Municipal Airport lost a roof off one of its buildings and was closed. The roof blew off the fire hall.

Walz expressed concern that with supply chain issues and shortages of building materials that it would be difficult to get work done.

Greiner added that the stress of the storm was affecting people’s mental health, and she had seen examples where citizens were having difficulty coping.

Peterson wanted everyone to be aware of the Minnesota Farm and Rural Helpline that is available via phone, text, or e-mail. The toll-free number is 833-600-2670; text is FARMSTRESS to 898211; or e-mail farmstress@state.mn.us. Be sure to leave a name and phone number so someone can call back as soon as possible.

In addition, Minnesota has Farm Advocates that can share their expertise with farmers to make informed decisions.

Their phone numbers are listed at mda.state.mn.us/about/commissionersoffice/farmadvocates.

“There’s always stress because we are getting into the field,” Commissioner Tufto said. “It’s nice to see Thom Peterson talking about these people (advocates) on staff.”

Director Kelly and Gov. Walz ask that farmers and rural people take lots of photos of damage – even if it seems as minor as a broken glass door or a tree that falls through the roof of a shed. Each county has an Emergency Management director, and he asks that photos and information be sent to those directors.

“It’s important for us to capture all of this (damage) and the public infrastructure as well as the loss…,” Walz said. “There are thresholds as far as federal disaster declarations, FEMA, and many times they do these multiple storms as one incident of things that come together.”

Farmers are also encouraged to report their damage to their local FSA office, Peterson said. The governor is asking the USDA to unlock a very low interest loan, and Minnesota may also have a zero percent interest loan for farms.

“Once you report (the damage), it does qualify you if there is a future disaster-type bill,” Peterson said. “That’s why we encourage people to contact their local FSA office.”

The Federal Emergency Management Agency (FEMA) intended to send a team to 49 Minnesota counties and 5 tribal nations for a Preliminary Damage Assessment. The assessment was expected to start May 23 in the Red River Valley due to flooding throughout northwest Minnesota. Then, the team intended to work its way south through the state to determine damage.

“There really is a clock ticking getting that damage assessment done, but I think where it’s really going to tie up the time (is during planting), and when those township supervisors that are farmers are going to want to take a break (from township work), that is when we’ll want to do the application,” Kelly said. “We’ll have to work with FEMA to get some grace to try to figure out how to do that.”

The group meeting in Benson, along with the governor and ag commissioner, agreed that returning the countryside to a normal and workable environment is what is important.

“I want to stress that we are all in this together,” Gov. Walz said. “I can’t guarantee it, but we’ve done it before when we saw fire decimate Madelia – we came together and passed legislation. This state can help.

“We need to help one another when these things hit, whether it’s a crisis like this or when we had situations on Lake Street in Minneapolis. We can help one another to try to get back,” he continued. “We are in a unique position where we not normally are – we have the resources to do some of these things.”

He added that it’s imperative to get farmers out planting the 2022 crop.

“It’s not just Minnesota counting on us, it’s the rest of the world that counts on us to feed them, and it’s already disrupted enough,” Walz said.

Jennie-O Turkey Barns destroyed in May 12 Derecho. A turkey barn location was razed by the May 12 derecho near Appleton, Minn. The barn had no turkeys due to high path avian influenza.

Gov. Tim Walz took notes while Benson Mayor Terri Collins welcomed local leaders and first responders to a discussion of the May 12 derecho that caused millions of dollars in damage. Also seen are Commissioner of Agriculture Thom Peterson (back turned) and Benson’s acting city manager. Photo by Andrea Johnson.