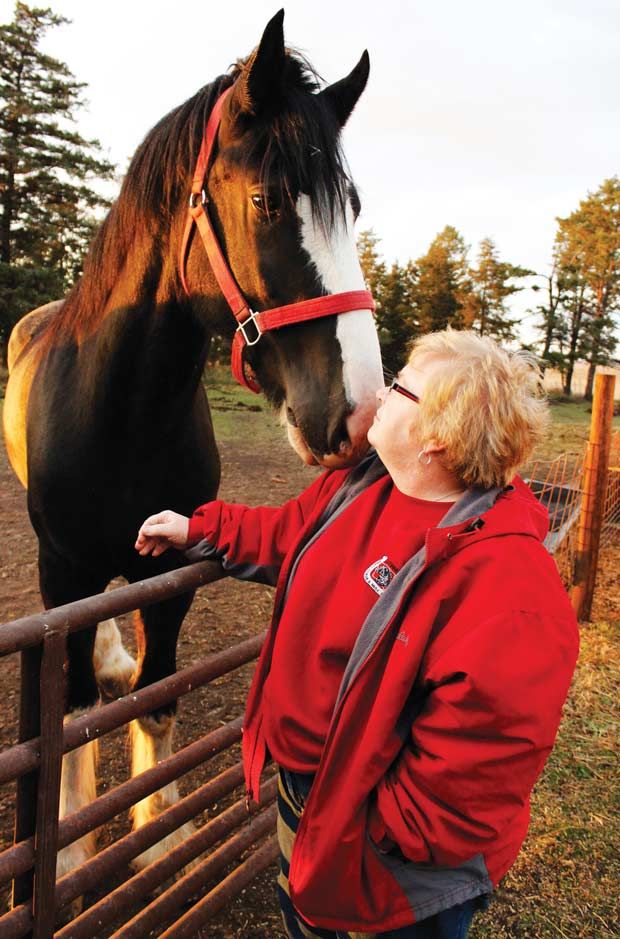 Becky Fevold breeds Clydesdales with her husband Steve on their third-generation family farm east of Gladbrook. They are actively involved in the draft horse show world with halter and hitching classes 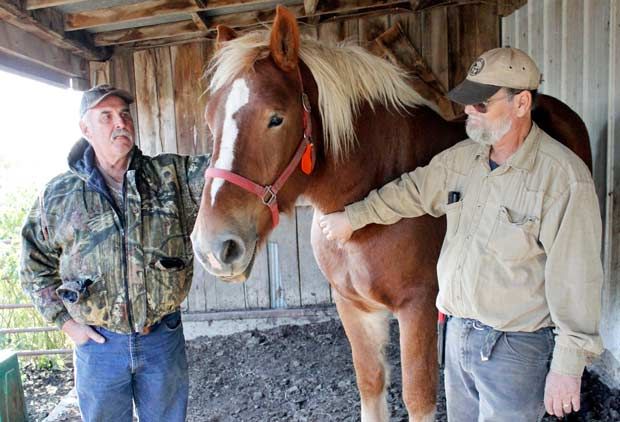 Ken Gill, left, and Ricky LaValley raise their mostly Brabant herds of draft horses on Gill’s farm south of Ackworth, where they enjoy using their teams for fieldwork – especially plowing and bobsledding.

Prior to the technological boom in recent decades, horses were used for nearly every aspect of fieldwork and transportation.

Few draft horses remain in the United States, but their numbers are steadily increasing, according to breeders in Iowa.

On a hilly Southeast Iowa farm, Larry Robison and his wife, Carol, wake up at 5 a.m. to spend many of their fall days manually harvesting sorghum to make molasses with the help of four Suffolk draft horses.

They cut off the ends of the plant and remove excess leaves. Next, they squeeze the sugary juice from the stalks in a rotating mill powered by the horses. The horses work with simple voice commands, moving only when told.

“A good team will do that,” Carol says.

It’s a peaceful process to hear the sugarcane dribble into the barrel.

“You can smell the dirt and hear the roots pop,” she says. “You don’t get that with a tractor.”

Overall, harvest might take more time, but the Robisons enjoy the simplicity, and they use their horses for nearly everything, including plowing, pulling stumps, baling and stacking hay.

“If you figured up the man hours, it’d scare you,” Larry says, but he likes using horses because they are “good, honest workers and pullers.”

In addition to fieldwork, they bring their teams to nearby Pleasant Plain from to give wagon rides at church fundraisers.

Earlier this year, they let Iowa Draft Horse and Mule Breeders Association (IDH&MBA) President Dave VandenBoom use one of their teams at a plowing event. He doesn’t have any horses of his own.

“That’s the funny thing about it,” he says. “I’m president of the draft horse association and I don’t own horses. . . . I live vicariously through all my friends who have draft horses and mules.”

VandenBoom’s interest with draft horses began about six years ago when he joined the association, but he has always had a soft spot for the traditional method of farming.

“Horses were how this country began,” he says. “They didn’t start out with these huge combines and huge tractors.”

Before modern machinery, horses were used to settle and build the United States and were a crucial part of agriculture — something he says is important to remember.

“To me, horses are just more of a solemn way of getting things done,” he says. “It’s pretty serene. You’re out in this field with God and His country and the horses.”

One way he’s helped promote the past is by helping organize an annual corn husking competition in recent years at the Amana Colonies, where draft horses and mules work alongside competitors as they pick ears from the field.

Becky Fevold and her husband, Steve, recently returned from the World Show in Canada, where they helped run a booth for the Clydesdale Breeders of the USA and met draft breeders from all over the world.

“I think the draft horse is coming back,” she says, noting more people in the United States are using them for work on small-scale farms and even for riding.

Fevold has served as secretary treasurer for the IDH&MBA for the past 24 years — a group her family has been part of since the 1950s.

For their family, it’s a way of life passed from generation to generation.

“They get in your blood, and it’s hard to get rid of it,” she says.

The Fevolds own 17 Clydesdales on their 240-acre Central Iowa farm, and they are expecting four foals in 2015. Fevold’s family has always had draft horses, out on roughly 40 acres of pasture, alongside shorthorn Simmental and Angus cattle.

As she flips through a scrapbook on her kitchen counter full of photographs from horse shows, she says this year they have shown their black Clydesdales at the Iowa, Wisconsin and Illinois state fairs — earning grand champion gelding in Illinois and best junior team and reserve junior champion stallion in Wisconsin.

“It’s an expensive hobby,” she says, noting some show equipment can cost thousands of dollars. “I prefer halter, the rest (of the family) prefers hitching.”

In addition to showing, Fevold says they have pulled wagons for weddings and other local events.

They bring their horses to visit residents at the Sunrise Hill nursing home in nearby Traer every September for the annual grandparents’ day event. She says the horses love the attention and the residents look forward to their return every year.

“They call them ‘gentle giants,’ and that’s exactly what they are,” she says.

What started as a “babysitter” horse for his daughter nearly 30 year ago, has turned into a hobby for South Central Iowa draft horse breeder Ken Gill.

Back then, his 8-year-old daughter, Melissa, wanted to learn how to drive a team, and by age 9 she was hitching up her own horse.

A second mare died while giving birth, and Melissa raised the orphaned foal.

“She was mama,” he says. “That horse would do whatever she asked.”

Since then, Gill says he keeps four or five broke teams for driving at all times, and at one time owned around 22 head of various breeds. His favorite is the Brabant.

“I like their dispositions,” Gill says. “They are very calm and easygoing.”

His grandchildren often play with the horses, and he says many of his horses are “more babysitter than horse.”

“They wouldn’t hurt those little kids for nothing,” he says.

He recalls several horses he’s owned and trained throughout the years. For many horsemen, these animals are more than just livestock.

Gill remembers each one by their personalities, like one special team of dapple gray Percherons, which have since turned white with age.

“They were a well-trained team,” he says. “Nell is still here, and will probably die here. She’s a good old horse.”

A lot of factors can go into fencing decisions, in particular as some costs go up and a few materials see reduced availability.

SALISBURY, Mo. — For seedstock producers, when to start having production sales can be a big decision. For Charles Henke, the time was right i…

Pork producer builds on past successes

HIGGINSVILLE, Mo. — On his Lafayette County farm, Mike Williams displays the skeleton of a Hampshire boar called “Roughneck,” an example of wh…

A Pork Checkoff webinar May 19 took a look at potential supply chain disruptors, as well as the overall demand outlook for pork. Jayson Lusk, …

Nearly 50 years ago, in September 1973, Everett Forkner sold a Duroc boar that made history, bringing a record $38,000 in the sale at the Nati…

Becky Fevold breeds Clydesdales with her husband Steve on their third-generation family farm east of Gladbrook. They are actively involved in the draft horse show world with halter and hitching classes

Ken Gill, left, and Ricky LaValley raise their mostly Brabant herds of draft horses on Gill’s farm south of Ackworth, where they enjoy using their teams for fieldwork – especially plowing and bobsledding.