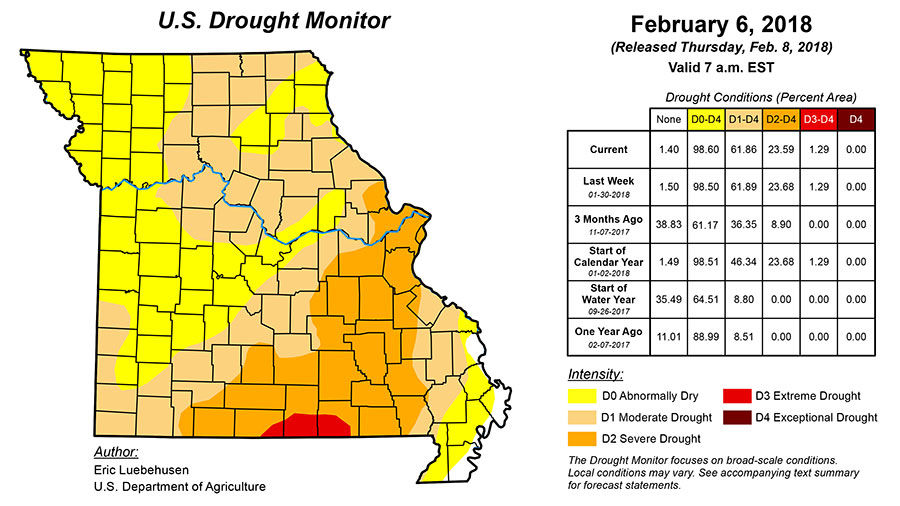 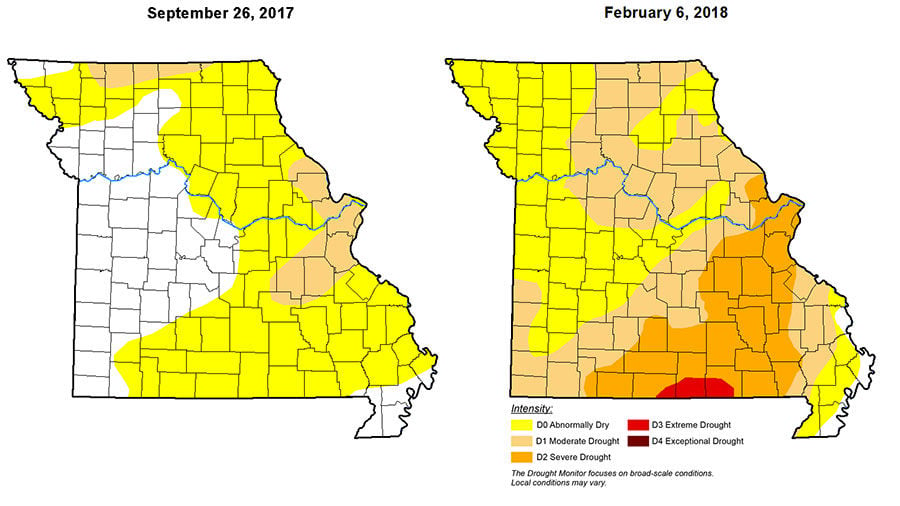 COLUMBIA, Mo. — Most of Missouri remains in a drought, according to a map released Feb. 8 by the National Drought Mitigation Center.

“We’re still in winter and there is time for notable improvement,” Guinan said in an Extension news release. “Climatologically, southeast Missouri has the best chance for drought recovery during the cold season.”

While concerning, things could be worse. In 1953-54 there were 16 consecutive months of below-normal precipitation, he said. Five years ago, Missouri experienced a severe hydrological drought that carried over from the historic drought of 2012. Conditions improved in February and March 2013, when a much wetter weather pattern emerged.

For Missouri, September 2017- January 2018 ranks as the driest September to January period in more than 40 years, Guinan said.

The statewide average precipitation for the period was 8.3 inches — slightly more than half the normal 15.9 inches.

For the fifth year in a row, Missouri experienced below-normal precipitation in January. Statewide, precipitation for November-December 2017 averaged 1.91 inches, or 30 percent of normal.

For some locations, the dry spell began as early as June 2017. By the end of the year, drought affected much of the state, with parts showing a rainfall deficit of a foot or more, Guinan said.

MU Extension specialists from east central, southeastern and south central Missouri reported drought impacts to Guinan in the fall. These impacts persist. They reported failures of fall-sown crops, including wheat, to germinate. Annuals such as oats and turnips did not produce well, and new grass and legume seedlings were reported in poor condition.

“Producers who need hay and don’t yet have it tied down are looking out of the area and are probably going to have to pay higher than normal prices,” said Ted Probert, MU Extension dairy specialist in Wright County in southwestern Missouri.

Because of dry conditions, farmers started feeding hay earlier in the season than normal, Probert said.

Anthony Ohmes, agronomy specialist in Cape Girardeau County, said dry conditions caused some emergence issues and delayed planting of fall-seeded perennials in southeastern Missouri. This left them immature going into winter. Hay stockpiles are adequate in most cases, but some livestock farmers are shipping hay in from southern states, he said.

Guinan said low temperatures during the last week of December into January made for stressful conditions for livestock farmers who had to break ice on frozen ponds, and move cattle because of low or empty ponds or for shelter. Wells dried up or levels dropped.

The extended period of subfreezing temperatures, combined with little or no snowpack and dry soils, contributed to an unusually deep frost line, Guinan said.

Guinan encourages Missourians to participate in the drought assessment process and submit information to the Drought Mitigation Center’s Drought Impact Reporter at droughtreporter.unl.edu/map.