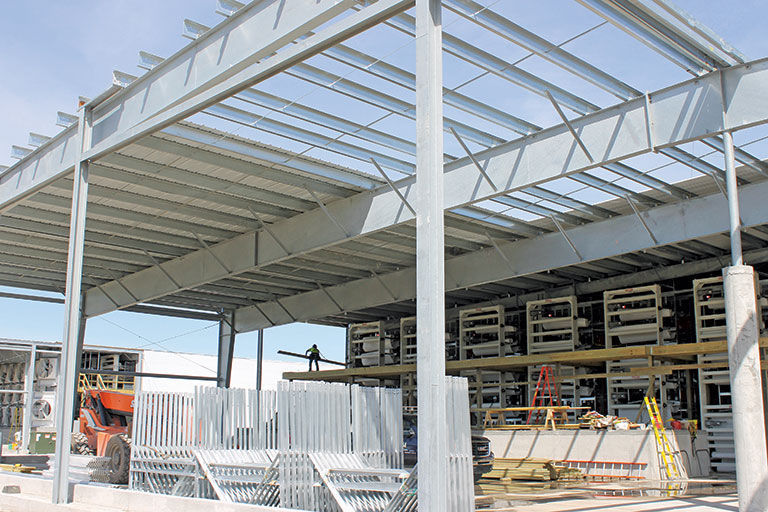 Two new poultry barns at Rose Acre Farms in Francesville, Ind., are being built inside out. They start with the construction of the cage-free poultry system, then walls are wrapped around the building. 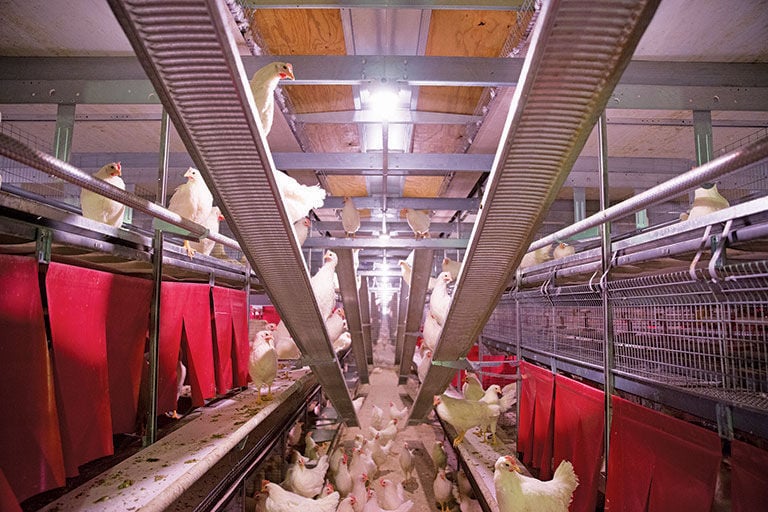 Two new poultry barns at Rose Acre Farms in Francesville, Ind., are being built inside out. They start with the construction of the cage-free poultry system, then walls are wrapped around the building.

Rose Acre Farms, one of the nation’s largest egg producers, and Summit Livestock Facilities, an agricultural construction company, didn’t need to swing open the doors to show the inside of two new cage-free buildings in northwestern Indiana during an April 17 open house. They are building the inside before the outside.

The patent-pending Wrap-the-Equipment technique is specially designed to make it possible for the companies to efficiently create an environment demanded for cage-free hens.

The layer house is built from the support structure outward, then the structure is “wrapped” in 2-inch insulated walls. Materials are limited to non-permeable steel and surfaces that cut down on the possibilities of harboring bacteria and other pathogens.

“Ed and his team took napkin drawings and made it a reality,” said Tony Wesner, Chief Operating Officer of Rose Acre Farms.

The project that started as a concept more than two years ago.

“The last building we build will look different than this one, and this one looks different from the first one three years ago,” Wesner said of the learning process that helps the companies produce each new building more efficiently.

The buildings have a 50-year lifespan, with a 30-year expected lifespan for the equipment inside.

The new construction is in response to the demand for more “humane and sustainable” egg production, Bahler explained. Wesner said the move to cage free is what his customers are demanding, so if he wanted to stay in business, he had to find a way to meet the demand profitably.

The new style of production is good news for corn and soybean farmers as well. The birds eat more because they are more active, and there is more spillage than conventional cage systems so 10 to 15 percent more feed is needed, Wesner said.

The cage-free layer houses at the Pulaski County, Ind., site are three of 10 Summit Livestock Facilities is currently building for Rose Acre Farms. One building at the Francesville site started production in January, and the two other buildings now under construction are set to open in May and July, Bahler said.

Wesner estimates the cost for modern cage-free buildings is between $45 to $50 per bird, with the Wrap-the-Equipment-style building being cost closer to $40. The buildings here will hold 378,000 birds which will provide nearly 18 million eggs.

“It’s efficient. There’s a good return on investment that will help us stay in business,” Wesner said.

This style of construction isn’t going to work for all egg producers. When asked if it is a scalable idea, Wesner said, “At some point you lose efficiency.”

Rose Acre is taking a bold step to meet buyers’ demands, but not all egg producers are following suit.

Some producers believe there will continue to be a market for cage-produced eggs and can’t justify the cost to convert their operations, said Ken Koelkebeck, University of Illinois Extension poultry specialist. Egg producers wonder if consumers will choose to pay the higher prices for cage-free eggs in the long run.

Ken Klippen, president of the National Association of Egg Farmers, also says cage free isn’t an option all are pursuing.

“(Rose Acre Farms) recognize that by offering cage free they will have a marketing advantage,” he said.

However, Klippen’s organization is fighting against legislation that would allow only cage-free egg production. Cage-free eggs are often double the cost of conventionally produced eggs.

Some egg producers are waiting to make sure large buyers don’t backtrack if consumer demand isn’t there.

For example, while one year ago in April, Walmart vowed to “transition to a 100 percent cage-free egg supply chain” by 2025, its official announcement included the stipulations “based on available supply, affordability and customer demand.”

This would have a big impact on producers since Walmart sells 25 percent of eggs in the United States, Koelkebeck said.

“I’ve talked to a few egg producers on both sides of the camp trying to figure out what to do. Some are already in cage-free production, and their customers already demand those eggs,” he said.

“Others say their customer doesn’t care, and they are holding their ground for cage production which can offer less expensive eggs to consumers.”

Rose Acre and its partner, Summit Livestock Facilities, are so confident in their customers they are willing to make the investment in cage-free buildings for the future.

In the new facilities, laying hens can roost, run and fly in multiple levels. Air circulation is facilitated by plenums built into the outer walls. Manure (litter) moves out on conveyors, keeping odor down for workers and hens.

Eighty tons of manure will leave each layer house a week. The drier manure attracts fewer flies, which also helps with flock health, and the 12 to 14 percent moisture manure is used by local farmers for fertilizer. Wesner estimates the value of the manure to be $130 to $140 per ton.

Four to five people can manage a building, compared to 15 to 20 workers needed in a conventional system.

He said there is a learning curve to management, as there was with earlier systems.

“Eventually it will be the norm,” Wesner said

“It’s been a learning experience for all of us,” says Ralph Miller, who has been working in the egg business for 33 years. He was production manager with Rose Acre in North Vernon, Ind.

For years producers perfected how to best raise hens in cages, Miller said, and now they have to adapt to the differing needs of birds without them.

BLOOMINGTON, Ill. — Poultry producers don’t seem to be flocking to Illinois these days, but there are pockets of the industry throughout the state.