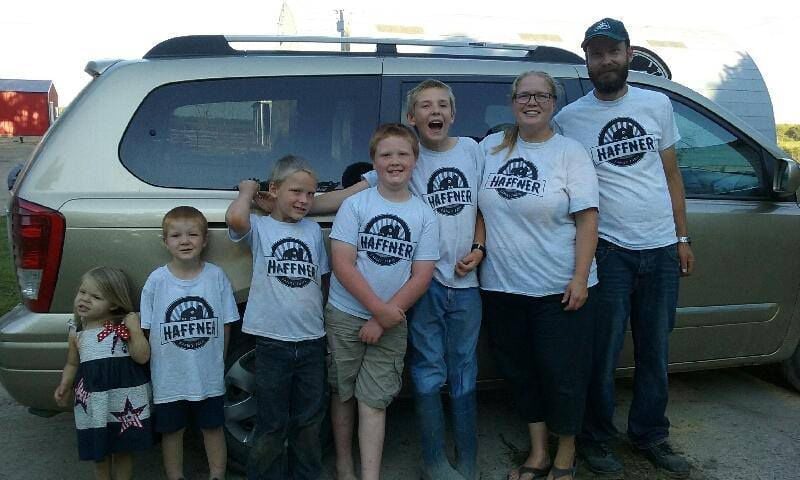 Becky, her husband Will Haffner and their five children, Quenton, Carson, Graham, Benjamin and Greta have been farming for five years. 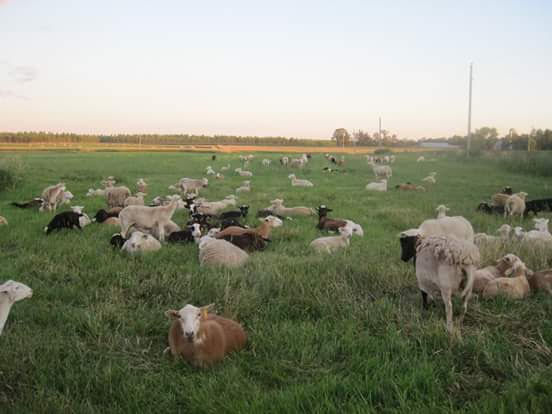 Becky, her husband Will Haffner and their five children, Quenton, Carson, Graham, Benjamin and Greta have been farming for five years.

ROSE CITY, MN – Lambing season is in full swing for Minnesota’s sheep producers. For the Haffner Family Farm of Rose City, MN, the first of their 150 ewes began lambing the last few days of February.

The Haffner family operates a 200-acre farm in Douglas County, producing lamb, pork, chicken and some beef. They also raise alfalfa, corn and wheat, which is fed back to their livestock.

“We are focusing on raising high quality meats,” said Becky Haffner during a recent phone interview. Becky, her husband Will and their five children, Quenton, Carson, Graham, Benjamin and Greta have been farming for five years. While they have a diversified farming operation, their herd of Katahdin Hair sheep make up a large portion of their production.

“I had been researching when I found the Katahdins,” said Becky. “They were hardy, easy to breed, not skittish.”

Having a docile temperament and not being skittish was an important trait. “We have five children, so we needed sheep that like social interactions,” she said.

The ewes were bred in groups. Seventy-five ewes were due to start lambing on Feb. 28, five had already lambed by that date. The second group of 75 is due April 1.

“We actually tried to breed a handful of ewes for fall lambs,” she said. “Some Katahdins will breed out of season, ours will not.”

A common practice in sheep production is to increase the feed or the amount of energy in the ration provided to the ewes just prior to introducing the ram. It is called flushing. The ewes will gain extra weight, signaling to their body that they are capable of raising more than one lamb. The ewes then cycle closer together and with the potential for more lambs born per ewe.

“We do not flush, we just feed them the same throughout,” she said. “We run them on pasture and we pull them off when we need to in the fall to let our pastures rest and then we feed our alfalfa hay that we grow, but we do not feed anything extra to flush them or cycle them together.”

By not flushing the ewes, the lambing season is spaced out more with fewer ewes lambing each day.

“If we could get just four a day, that would be our ideal for the way we work,” she said.

The ewes are housed in the lambing shed. They are fed outside twice a day and their water source is inside the shed.

“Last year, we were feeding in our barn and they were not getting very much exercise and we did have some issue with lambs being tangled, so this year we are feeding outside and watering inside, getting them moving more,” she said.

In addition to changing where the ewes are fed, the Haffners have decreased the amount of feed provided. Their ewes receive hay consisting of quality alfalfa and Timothy grass that they raise themselves and no grain.

In the past, the ewes were fed three times a day. That resulted in large lambs being born that required more assistance during birthing.

“We feed twice a day, we get nice-sized lambs,” she said.

These simple management techniques, the amount of feed provided and the location of the feed relative to the water, make the lambing process easier for the ewes.

Once the lambs are born, each ewe and her babies are “housed” in a 4- by 4-foot pen called a jug. Each ewe is kept in the jug for one to three days. This gives the ewe a chance to bond with her new offspring and it allows the Haffners to watch the lambs closely for the first few days, ensuring that they are eating enough and the ewe is producing enough milk.

New lambs are vaccinated with the CD-T vaccine. This helps prevent tetanus.

“We have never had tetanus on our farm, that we know of, but we just do this as a precautionary per recommendation of the vet,” she said.

The CD-T vaccine also works to prevent overeating disease that can impact lambs over one month old.

The lambs are raised for meat. Some are fed a specialty diet of pasture grazing and non-GMO grains. Those lambs are marketed by the Haffners and sold directly to the consumer.

The remaining lambs, approximately 200 head, are fed a standard ration and marketed in Pipestone, MN. Because their lambs are born later in the spring, they tend to see a lower market price than lambs born in January.

“It seems like the price falls throughout the year, so if you were to lamb in January, probably get the best price but then you put in the most labor,” Becky said.

Becky has spent a lot of time researching, reading books and participating in other online forums.

“It is a learning process I guess, at first it is kind of intimidating, but the more you do it, it is pretty simple,” said Becky.