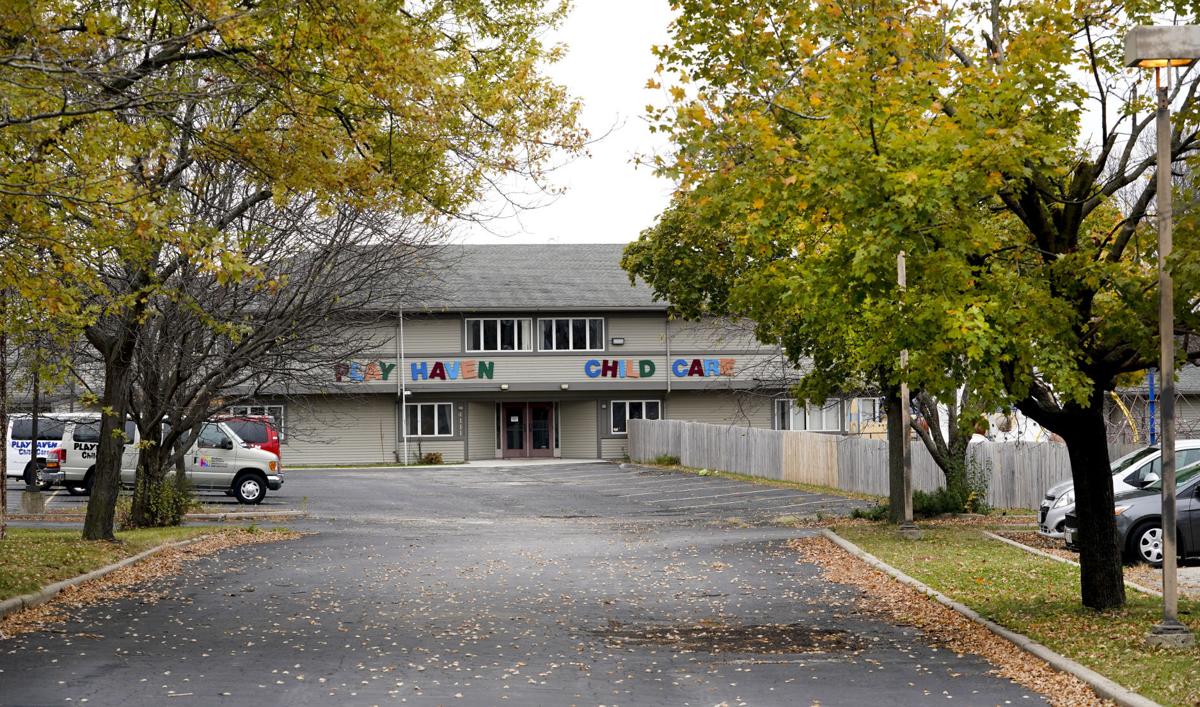 Madison is moving to buy this former child day care building at 4111 East Towne Blvd. for an interim men’s emergency homeless shelter. The city and Dane County, are also exploring the purchase of an adjacent property at 4101 East Towne Blvd. and could use the combined sites to host an array of services for the city’s homeless population. 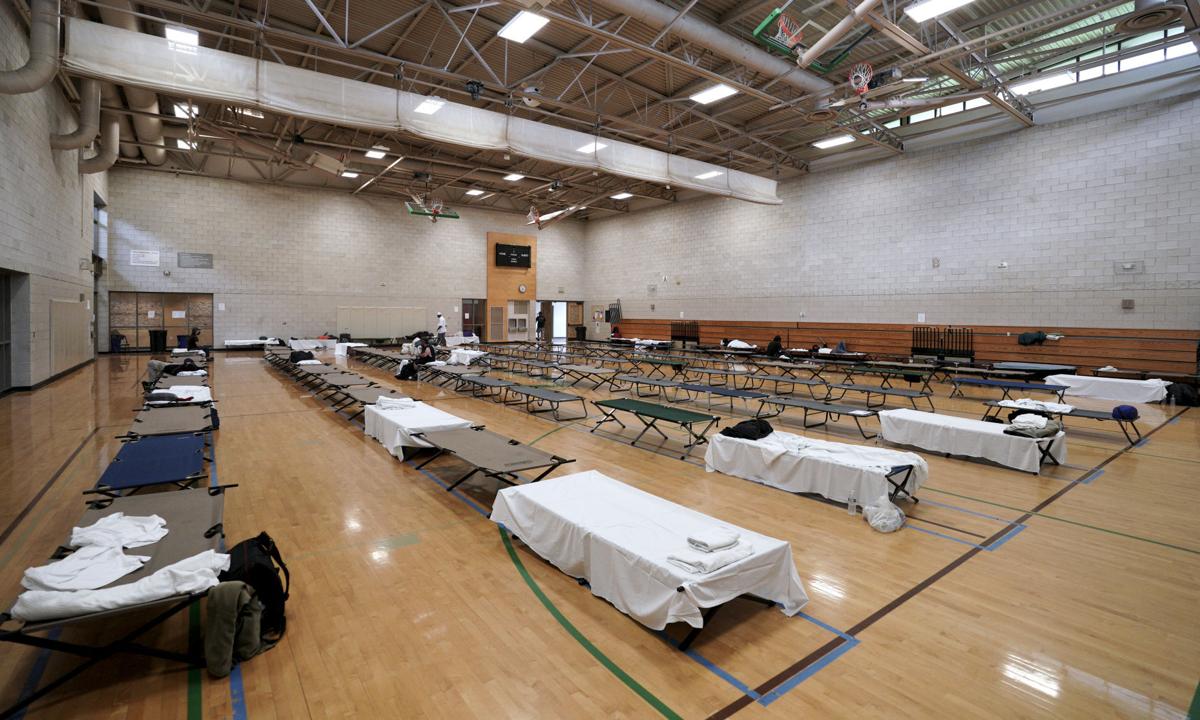 Currently, a temporary emergency men's homeless shelter at the Warner Park Community Recreation Center gym on the North Side allows for social distancing during the COVID-19 pandemic. The city and Dane County are moving to create new facilities for homeless men on the Far East Side.

After a six-month search, Madison and Dane County are moving to buy a former child daycare center and perhaps adjacent property for a desperately needed new men’s emergency homeless shelter and more to serve the homeless population.

Since late March, when COVID-19 struck, the city and partners have been temporarily sheltering homeless men at the Warner Park Community Recreation Center on the North Side. Before then, men were sheltered in three cramped church basements Downtown.

Mayor Satya Rhodes-Conway on Tuesday will introduce a resolution to have the city buy a vacant, two-story, 22,584-square-foot daycare center on a two-acre parcel at 4111 East Towne Boulevard on the Far East Side for conversion to an interim men’s homeless shelter. The city is also exploring the purchase of an adjacent parcel with a smaller building on a half-acre at 4101 East Towne Boulevard, which could create a large single site where the city and partners could develop a permanent, purpose-built shelter, a day resource center, “pay-to-stay beds” and/or low-cost housing.

No decisions on long-term development have been made.

“Since 1985, the provision of emergency shelter has relied upon space generously offered by Grace Episcopal Church, with help from St. John’s Lutheran Church and First United Methodist Church,” Rhodes-Conway said. “We owe those congregations and their leadership a huge debt of gratitude, but it is long past time that we develop purpose-built shelter.

“This acquisition is a critical first step in achieving that goal,” she said. “I’m grateful for the partnerships that got us this far, and I’m looking forward to working with the county and the community over the next year to make this a reality.”

The city would deliver $3 million, and Dane County Executive Joe Parisi has already recommended the county contribute another $3 million, for an initiative to serve homeless men. The 4111 East Towne Boulevard property would cost $1.3 million, and the adjacent property, if acquired, perhaps another $700,000, leaving $4 million for interim renovations and further development.

“I included $3 million in my 2021 county budget to jumpstart a collaboration to improve our sheltering network,” Parisi said. “As we saw with the Beacon Day Resource Center, big projects work when trusted, effective partners come together around a common purpose; in this case that’s improving services for our most vulnerable.”

The plan, however, still leaves the city and county stressed to provide short-term emergency men’s shelter for the next year or so.

The mayor’s resolution authorizes expedited hiring of architectural and engineering services to prepare conversion of the child care center to an interim homeless shelter, but that initial phase of the project won’t be completed until the first quarter of 2022, officials said. The city, which can’t use Warner Park as a temporary shelter indefinitely, is exploring short-term options.

Rhodes-Conway and Parisi intend to share more details on Tuesday.

A lot of need

The immediate and long-term challenges are daunting.

In late March, as the COVID-19 pandemic took hold, the city and nonprofit Porchlight, Inc., which runs the men’s emergency shelter system, moved homeless men to Warner Park from the metal bunks they were using at Grace Episcopal Church and overflow spaces in the basements of St. John’s Lutheran and First United Methodist churches, where they slept side by side on mats on the floor.

The move was necessary because the church basements had limited space to practice social distancing or isolate those who may have been exposed to the virus. The system has also long posed other challenges to staff.

At present, Warner Park can handle up to 150 men, city community development director Jim O’Keefe said. At its peak, Porchlight cared for up to 170 men in the three church basements before the COVID-19 pandemic struck.

“We are anticipating greater demand,” perhaps 250 men each night this winter, O’Keefe said. Ultimately, “we’d like to be prepared to accommodate as many as 250 to 300.”

One thing is certain: the city and partners can’t go back to the way things were before COVID-19.

Even before the pandemic, the church basements were seen as inadequate. In late February, Rev. Jonathan Grieser, rector at Grace, said, “A vibrant community is a great community to the extent it cares for its most vulnerable people, and by that measure, Madison is failing. We’ve settled for barely humane shelter.”

At Warner Park, Porchlight implemented rigorous procedures to keep homeless men and staff safe, and the site has worked “very well,” officials said. The facility is not being used for those who have symptoms or test positive for COVID-19. They are sheltered in hotels or motels.

Now, the city and partners hope for something permanent, even if it’s not near Downtown, where many homeless tend to congregate and The Beacon day resource center is located.

“It doesn’t have to be Downtown,” O’Keefe said, noting that the East Towne Boulevard properties are near a planned Bus Rapid Transit stop and other amenities.

Beyond converting the former child care building to an interim emergency men’s shelter, no other decisions have been made, he stressed. The child care building needs bathrooms, showers, renovations to make smaller rooms into larger spaces, and must meet fire code requirements, he said.

Ultimately, the combined sites, if the adjacent property is purchased, could provide the space for a small campus that might include a new construction men’s shelter and perhaps other facilities. It’s unclear how the interim men’s shelter would then be repurposed.

Building and running it all won’t be cheap. Porchlight’s budget for the shelter system at the churches was about $500,000, while sheltering the men at Warner Park is costing about $1.8 million on an annualized basis, O’Keefe said. The costs at the new site will depend on what’s built, he said, adding that the city and partners would likely issue a request for proposals for an operator there.

“There’s going to be a whole lot of community engagement and conversation,” O’Keefe said. “What do we want? What’s the cost? Who’s going to pay for it?

Madison is moving to buy this former child day care building at 4111 East Towne Blvd. for an interim men’s emergency homeless shelter. The city and Dane County, are also exploring the purchase of an adjacent property at 4101 East Towne Blvd. and could use the combined sites to host an array of services for the city’s homeless population.

Currently, a temporary emergency men's homeless shelter at the Warner Park Community Recreation Center gym on the North Side allows for social distancing during the COVID-19 pandemic. The city and Dane County are moving to create new facilities for homeless men on the Far East Side.