The smell of leather permeates an A-frame building on Highway 20 in Harrison that has traditionally been filled with the scents of burgers, pie and coffee. With every nook and cranny stuffed full of leather goods and antiques, the one-time Village Barn Café has a new purpose in 2021.

In the middle of the tack, custom made leather gifts and antiques that have overtaken the space that used to be filled with booths and tables is new owner, Gerald “Jerry” Foerderer. His vision of owning a big business in a small town is behind the makeover from food barn to leather barn. The community has been particularly receptive.

“It’s their business. Without them, we wouldn’t be here,” he said.

He opened the re-imagined Village Barn earlier this year, and an old wagon out front simply bills the business as “Boot & Shoe Repair.” In reality, Foerderer’s vision is much broader as he aims to make his business and new hometown a destination – today and tomorrow – by connecting to his ancestral heritage and sharing it with others.

As a boy in Jamestown, North Dakota, Foerderer’s father raised horses and ran a wagon train, piquing his son’s interest in draft horses.

“I was 16-years-old, and I had a big interest in draft horses. My goal was to make show harnesses,” he recalled. “I started making show harnesses and custom tack in my dad’s stables.”

His father helped him rebuild used stitching machines to launch the business and taught him some of the basics of leathercraft, but Foerderer also traveled east to spend time in the Amish leather shops, learning the trade by observing and asking lots of questions. By the time he was 18, he was so busy he relocated his business into town, purchasing his first storefront in 1989.

Eventually, he sold his business to fulfill a dream to move farther west.

“Opportunity never gave me the chance to restart in a little town, which I really desired,” he said.

While he continued to dabble in leatherwork on the side, carpentry became his full-time occupation to support his growing family. Today, he and his wife, Laurie, have seven children. They’ve spent the last 15 years in eastern Montana living off the grid, with water from a gravity flow windmill, no power and, obviously, no modern technology like computers and internet.

“It can be done. My children have an understanding to be able to make it if there are hard times,” he said.

His wife and children work in the business with him, making it a true family endeavor, much like everything else they’ve undertaken.

For eight of the 15 years they were in Montana, the family worked together to host a Bible camp each fall for roughly 100 attendees.

“We feel blessed by the Lord,” Foerderer said. “What I have here isn’t of my own. It was given to me by him,” he added.

He also credits those who came before him and has taught heritage activities, such as rope making, soap making, candle making, hatchet throwing, rug making, flint knapping, fire building, on wagon train events and, to a more limited extent, during the Bible camp. Foerderer hopes to eventually host similar events in northwestern Nebraska to connect new friends to the heritage of those who came before.

And while he’s always been interested in the pioneer lifestyle, his passion for lost ways of life has grown as he’s studied the history of his ancestors, the Volga Germans. Volga Germans settled in the lower Volga River region of Russia in the 1700s as part of a colonization program promoted by Catherine the Great. More than 30,000 Germans immigrated to Russia as part of the program, and established communities reflecting their native language, religious beliefs, customs and traditions.

By the late 1800s, some of the families began migrating to North America, and the suppressive regimes of Tsar Nicholas II, Lenin and Stalin hastened immigration out of Russia. Those who remained were either deported or died through mass executions, forced labor or deliberate starvation.

“I have such a passion for where we came from in Russia,” Foerderer said. The more he learned about his ancestors, the stronger his desire to return to leatherwork full time.

“This was a trade that was from the old country,” he noted. “There used to be shops like this all over.”

His family immigrated to the U.S. and settled in Yankton, South Dakota, though there were Volga settlements across northern Nebraska as well. He knew as he returned to the leather trade, he wanted to be closer to those regions and began exploring the area. He spent time in Crawford in 2020 and determined that northwestern Nebraska would be his family’s next home and the site of his business.

But that vision of connecting past and present is bigger still. He’s rented a pasture near his shop in Harrison and plans to drive his horse-drawn wagon to town some days, and he has parked several wagons and buggies out front. He rebuilds covered wagons and will have them for sale at his shop. An eclectic variety of antiques is also mixed in with the tack and leather goods, yet another aspect of the business Foerderer hopes to grow.

“The antiques are part of the lifestyle.”

One day, he’s also hoping to train others in leatherwork.

“I want to share this lost culture and heritage with young people,” he said. “It’s a lifestyle not to be forgotten. The hardships that our great-grandparents went through, I don’t think could ever be explained. I admire those that cut the trail for us.”

So why Harrison, Nebraska? It’s the one question he’s been asked over and over. While he was ready to set up shop in Crawford, he started looking at maps of the area and realized the population of Sioux County was just over 1,000 and that Harrison was the only town in the county. During a visit to the village, he stopped in at Herren Brothers True Value and Whiteaker’s Western Wear.

“I walked into Whiteaker’s – it was like stepping back in time,” he said of his first visit to the store on Main Street. The visit and the longevity of businesses like Herren Brothers and Whiteaker’s reinforced his idea that his vision of a big business in a small town could succeed.

“It was the adventure of being in a remote place.”

July WASDE focuses on wheat with durum a ‘shocker’

A “tremendous amount” of uncertainty exists about what the U.S. production and consumption will be for the upcoming crop, according to Frayne …

Smoke from wildfires in the western United States and Canada is blanketing much of the continent. And experts say the phenomenon is becoming m…

CALIFORNIA, Mo. — LeEtta Dampf’s desserts are always popular, but there seems to be extra enjoyment for her coconut cream pies on a hot summer…

Chasing a dream: T-H grad going to work for the biggest name in sports broadcasting

When Alexandra Snow, known as Allie to her friends, graduated from Tekamah-Herman in the spring of 2016, she said she wanted to be a sports br…

INDIANOLA, Iowa — “I think there’s a bee on your lens.”

Montana Fair returns in full force after smaller event in 2020

BILLINGS, Mont. – The Montana Fair returns this summer from Friday, Aug. 13 through Saturday, Aug. 21, offering fairgoers no shortage of week-…

Speaking on a Zoom event sponsored by Zoetis July 30, Kevin Good says cattle producers might have some reasons to be optimistic going forward.

Clesham became frustrated with the volatility of the Irish beef sector, something American beef farmers know all too well. So, looking at the books, he felt after 23 years, it was time to go back to dairying.

A look at the 2021 drought in comparison to previous droughts 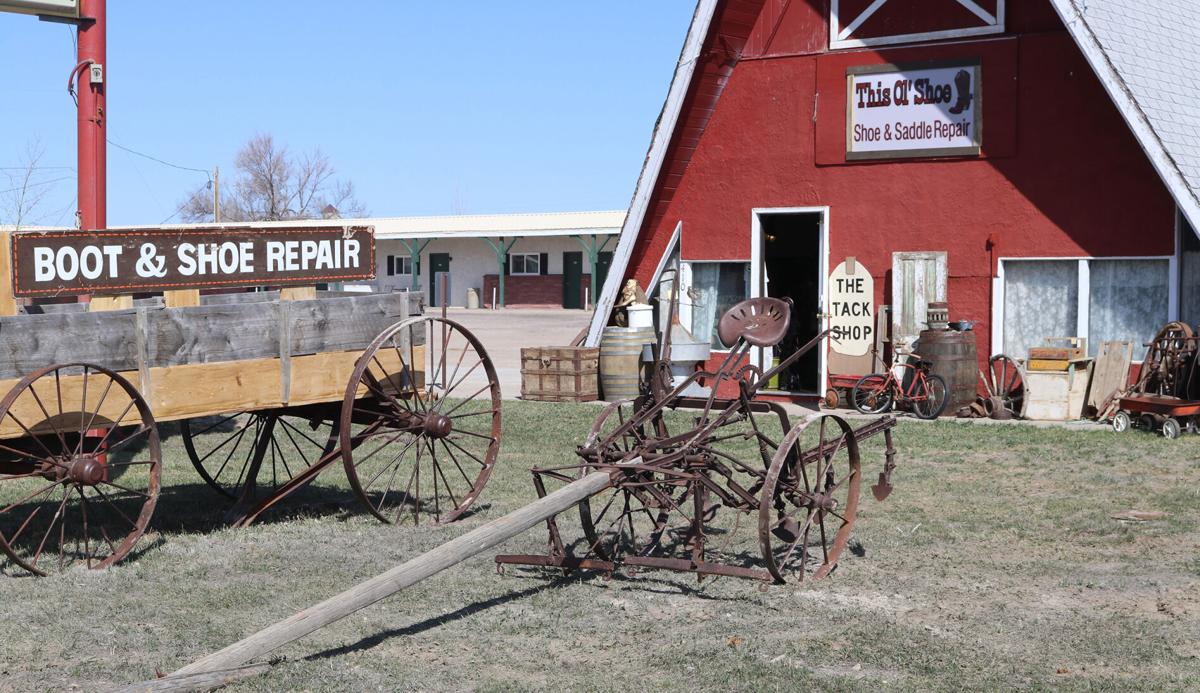 In a location that has traditionally served as a cafe for the community of Harrison, Neb., Gerald Foerderer has opened the re-imagined Village Barn, a boot and shoe repair shop that also offers custom leatherwork and antiques. 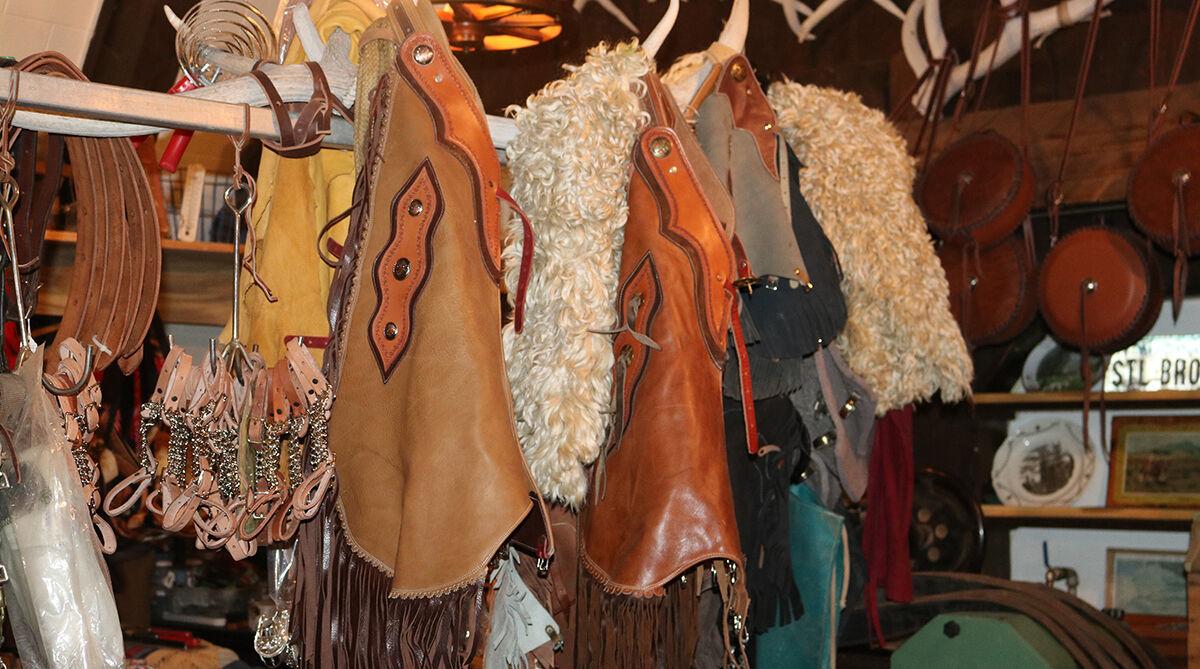 Gerald Foerderer offers custom leatherwork, including chaps like these, at his new storefront, The Village Barn, in Harrison. 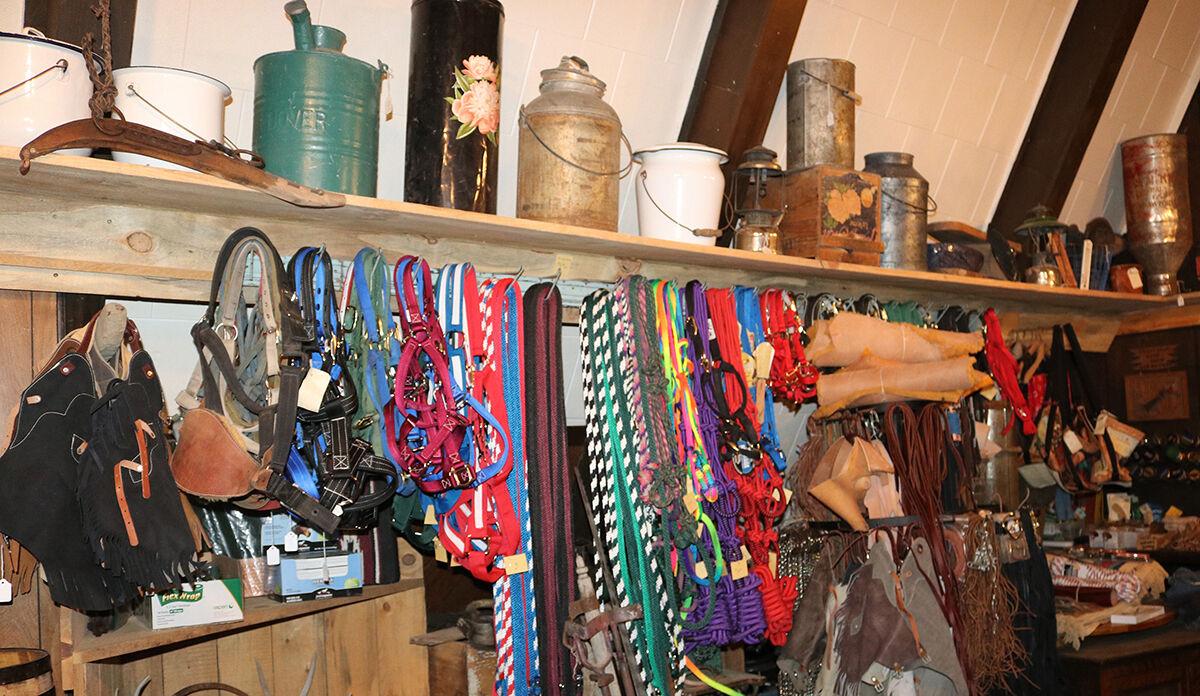 Tack and antiques co-mingle at The Village Barn, which opened recently in Harrison. 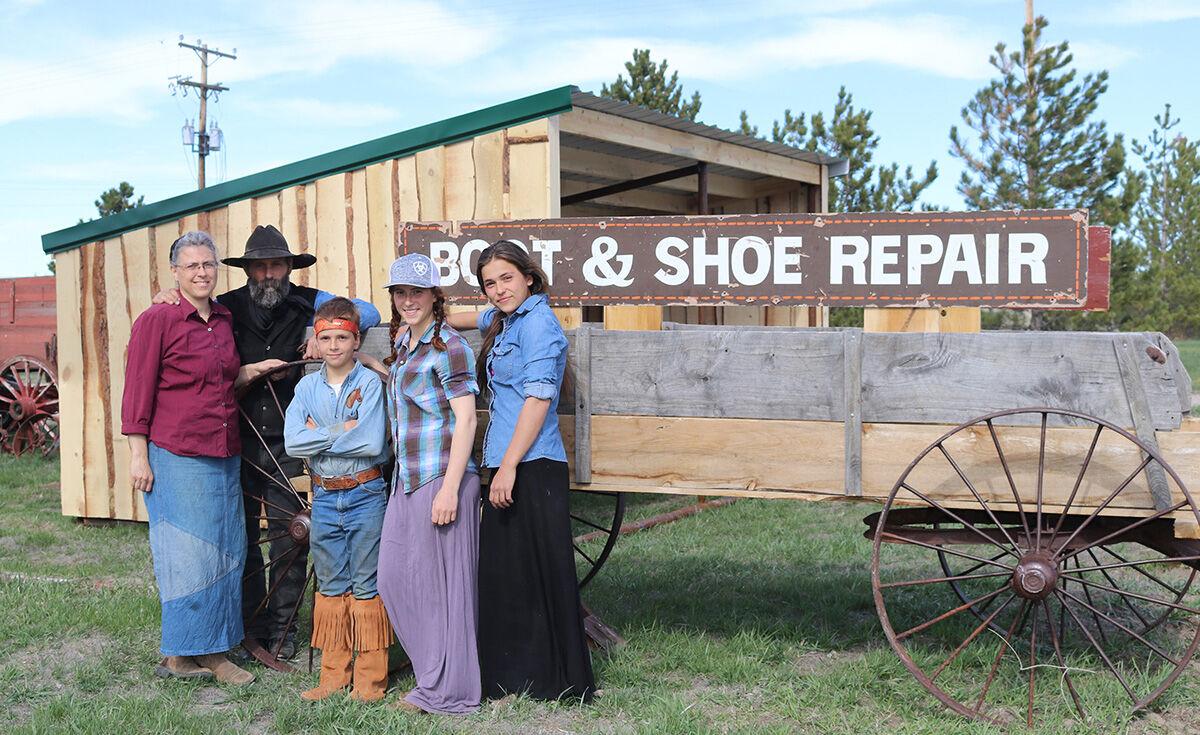 Jerry Foerderer and his family recently opened the Village Barn in Harrison, a boot, shoe and saddle repair shop that also offers custom leatherwork and antiques. He's pictured here with wife Laurie, and three of their seven children, Cameron, 10, Cailey, 16, and Cara, 14. 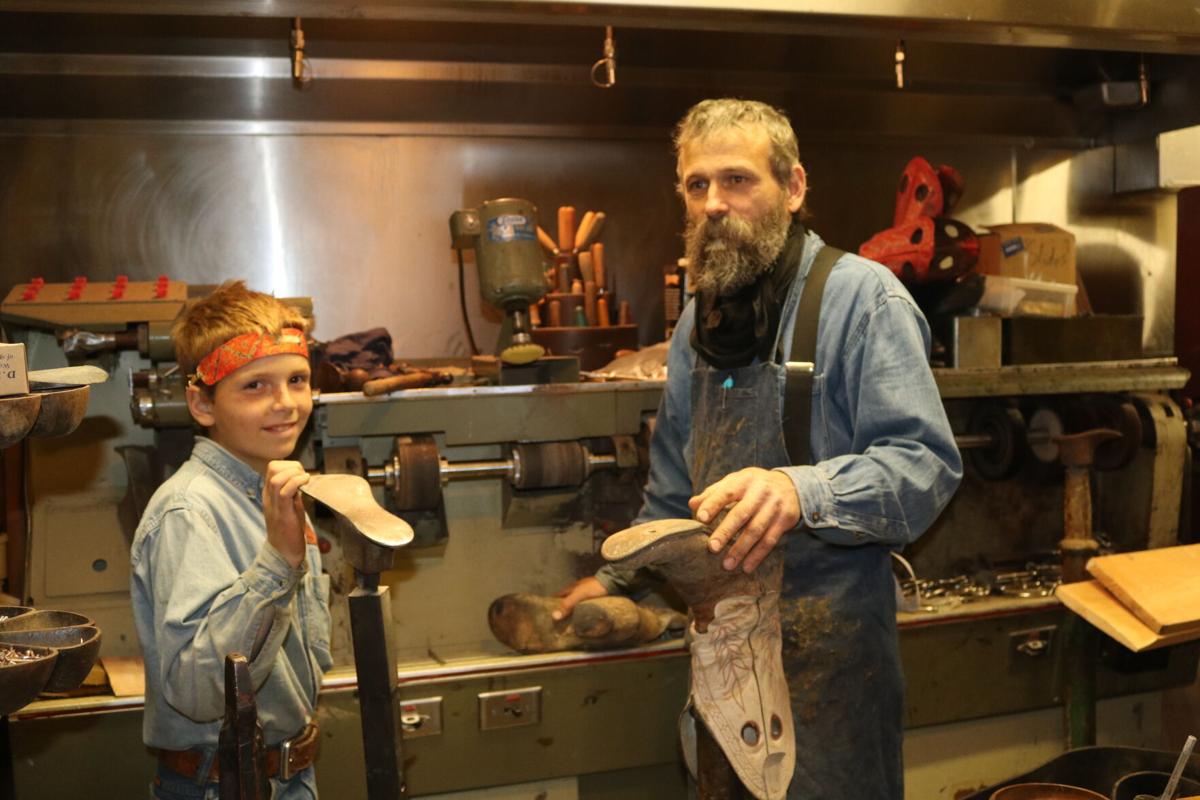 Jerry Foerderer works with his son in his leather shop. “I want to share this lost culture and heritage with young people,” he said. “It’s a lifestyle not to be forgotten.”