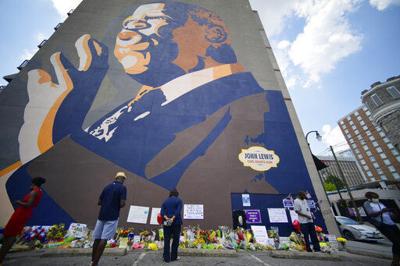 Before his death from cancer recently, U.S. Rep. John Lewis, D-Georgia, left an indelible mark on civil rights in this country, drawing attention to the inequalities faced by African Americans and working tirelessly to eradicate them, first as an advocate and later a congressman.

Time and again, he put himself directly in the crossfire, risking his life to promote equal rights. Many know the story of “Bloody Sunday,” when Lewis, on March 7, 1965, led 600 marchers across the Edmund Pettus Bridge in Selma, Alabama. There, they met a wall of state troopers armed with billy clubs, whips and rubber tubing encased in barbed wire — and gunning to harm the peaceful protesters.

Lewis suffered a cracked skull, but also swayed public sentiment in support of the Voting Rights Act, which was signed into law by President Lyndon Johnson a few months later, on Aug. 6, 1965. The legislation outlawed literacy tests and other tactics Southern states had used to deny African Americans the voting rights they were supposedly guaranteed under the 15th Amendment to the U.S. Constitution.

It was one of the most significant pieces of civil rights legislation ever enacted in this country. It made it possible for Lewis and other African Americans to run for public office and work to improve the plight of Black people through the legislative process. Lewis became the second African American to be sent to Congress from Georgia since Reconstruction when he was elected to the U.S. House of Representatives in 1986. He represented the state’s Fifth Congressional District, including much of Atlanta.

But in 2013, the U.S. Supreme Court, in a 5-4 decision in Shelby County vs. Holder, invalidated an important provision of the act called “preclearance” that required jurisdictions with a history of discriminatory practices in voting to get federal approval before passing any new elections or voting laws. The criteria were deemed outdated by the high court. The full Congress as a result was supposed to come up with new guidelines, but the Senate never acted. This allowed states to adopt new, discriminatory laws, including legislation mandating voter IDs, which makes it harder for African Americans and other people of color to vote.

To honor Lewis’ legacy and the spirit of his efforts, the Edmund Pettus Bridge should be renamed after Lewis, rather than continue to honor a Confederate general and Ku Klux Klan leader in Alabama. And Congress must make it a priority to pass a new voting rights bill that better protects citizens from discrimination and name it after the late civil rights icon.

The Democrat-controlled House already has passed such legislation, with Lewis’ support; it creates new guidelines for how states change their voting laws. “I have said this before, and I will say it again: The vote is precious. It is almost sacred. It is the most powerful non-violent tool we have in a democracy,” Lewis said of the legislation last year.

Lewis was known as the “conscience of the Congress” and it’s time lawmakers follow his lead to a decision that will put them on the right side of history. The country needs to move forward, not backward, and now is the time, when police killings of Black men have led for a movement to address racism in America.

Senate Majority Leader Mitch McConnell released a statement after Lewis’ death that said: “Our great nation’s history has only bent towards justice because great men like John Lewis took it upon themselves to help bend it.” McConnell should do his part in bending further toward that justice. The Republican-led Senate must recognize the value of protecting the right to vote and pass the new Voting Rights Act.