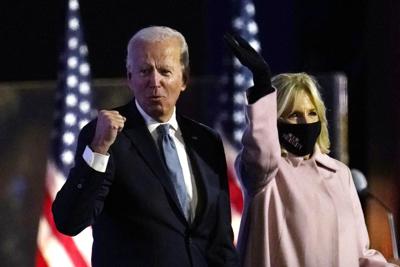 If you woke up Wednesday morning expecting to find out who won the presidential election, we are not there yet. Not even close.

Chances are we will not know today. We might not know tomorrow. We may not know this week. But we will know eventually. Until then, coffee. And wine.

Despite our urgency to know, patience is a virtue. And it’s one the president clearly does not possess. Around 2 a.m. on election night, President Trump announced at the White House that he’d won the election, called it a fraud, and promised to go to the Supreme Court in the case of his loss. It was a mixed but very dangerous message from someone who always planned to delegitimize the election results if they were unfavorable to him.

That Trump was already simultaneously claiming victory and fraud on an election that is not over yet is utterly unsurprising. What is deeply alarming is that he’ll likely have help.

There’s little doubt that Republicans in Congress, many of whom were rewarded for their loyalty to Trump in their own elections, will continue to rally around the president, despite his autocratic efforts to thwart the democratic process. He’ll have help inside the White House, at the Department of Justice, maybe even the Supreme Court.

Be patient and count all the votes

But ultimately, the votes will either be there or they won’t. And with some states allowing ballots to be counted through next week, the process may be excruciatingly slow. But it will play out — maybe in his favor, maybe not.

We do know a few things, though. That this election is so close means the support for Trump, despite his pandemic failures and everything else, is stronger than many predicted. The walloping repudiation of Trump that Democrats yearned for, both in the White House and down-ballot, did not happen, and will not have happened even if Biden ekes out a win.

Secondly, the polls are still very bad predictors of votes. Biden was up nationally against Trump by as many as 10 points in some polls. One poll had him winning Wisconsin by a bananas 17 points. The polls will likely be at least a little wrong and in some cases very wrong, which should remind us that we are — still — doing it wrong.

Phil Hands: The 14 best Joe Biden cartoons of all time

We are still getting exit polling, but it’s also looking clear that white America is still with Trump. According to CNN exit polls, Trump is winning among white men and white women, among white college and non-college-educated women. That could shift as more votes come in, but the idea that Trump’s shrinking white base wouldn’t be enough to get him reelected may not prove true.

Finally, we know that for a second time Democrats nominated a weak candidate. That they lost once to Trump and could do it again after all we know and have seen should be a wake-up call for party leadership.

All that said, we still do not know the answer to the most important question: who won. It will be frustrating and maybe even agonizing to let the process play out, but we must, despite the president’s best efforts to get in the way.

So hunker down, order in, stock the bar, get on with your life and try to sleep occasionally. This might take a while.

Cupp writes for Tribune Content Agency and is host of “S.E. Cupp Unfiltered” on CNN: secuppdailynews@yahoo.com.