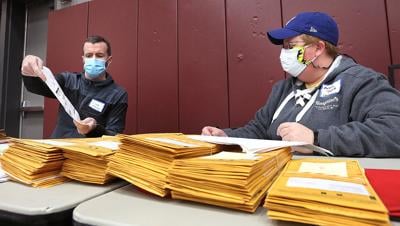 Once again, Wisconsin is key to the race for president.

And it wasn’t clear early Wednesday morning who had won. Milwaukee and other communities were still counting votes into the wee hours, with several battleground states still in play.

But this much is clear: Turnout was strong. And the pattern of states that were supporting Republican President Donald Trump and those that were favoring Democratic challenger and former Vice President Joe Biden was eerily similar to four years ago.

So America remains sharply divided, no matter who winds up winning the White House. Neither candidate appeared close to earning a sweeping victory and mandate. They were neck and neck.

And Wisconsin could be the clincher, having narrowly favored Trump in 2016.

Patience is required because so many absentee votes were cast before Election Day. Those take longer for poll workers to process. And in some states, including pivotal Pennsylvania, ballots postmarked by Tuesday weren’t going to be counted until as late as Friday. Moreover, court challenges are likely.

So sit tight and remember that this was expected, and that eventually we should have a definitive winner. Then it’s time for America to try to pull together to solve its biggest challenges, including the pandemic, a struggling economy, soaring debt and climate change.

Federal officials Tuesday afternoon reported no signs of malicious cyber activity. A federal judge also ordered a sweep of some postal distribution centers, including in Wisconsin, to ensure no votes were left behind. That bodes well for a tally the public can trust.

Let all the votes be counted, even if that takes longer than usual. We’re in the middle of a pandemic, after all, with the risk from a deadly disease scrambling our routines and expectations.

Have faith in American democracy.

Congratulations to Madison students and educators. Voters in Madison approved two referendums worth $350 million that will update the four main high schools and build an elementary school on the South Side. The district also will have permission to exceed tight revenue caps applied by the state.

Our public schools and — just as importantly, the health and prosperity of our city — needed this investment. It should position more young people for success.

Advisory referendums on a nonpartisan process for drawing legislative and congressional districts following this year’s census also were doing well on ballots in 11 counties scattered across the state. The public demand for ending gerrymandering continues to grow with bipartisan support. That’s great news for fair maps.

Want to relive the 2020 election? No? Well, check out this gallery of editorial cartoons by Phil Hands anyway.

See who the Wisconsin State Journal is endorsing in Tuesday's election

Our editorial board held video conferences with more than two dozen candidates in Tuesday's election. Scroll down to see who we are recommendi…

S.E. Cupp: Deep breaths, America: This election isn't close to over yet

If you woke up Wednesday morning expecting to find out who won the presidential election, we are not there yet. Not even close.