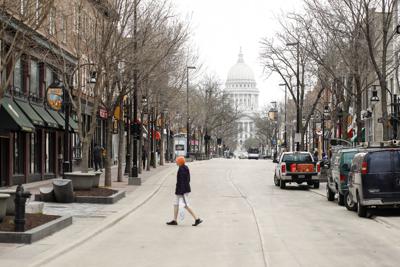 Madison absolutely should turn State Street into a pedestrian mall on weekends this summer, giving shoppers and diners more room to have fun and help revive Downtown as the pandemic subsides.

The city’s Central Business Improvement District wants to remove city buses from the entire stretch of State Street on summer weekends to make Madison’s signature shopping and entertainment district a more walkable and friendly experience for the public. They’re calling their proposal “Summers on State.”

The city’s Transportation Commission, which meets today, should embrace the idea. So should Mayor Satya Rhodes-Conway and city staff. Prioritizing people over buses this summer on State can be a test run for an even bigger idea — permanently turning State Street into a city park with trees, outdoor cafes and public art, rather than a half-mile stretch of concrete.

State Street is underutilized by the public. Most traffic has been banned from the six blocks between the Capitol Square and Lake Street for decades. Yet buses continue to lumber up and down State, especially the top half, which dramatically limits the amount of space for walking and fun.

The plan for this summer would close the street to buses and other vehicles on Saturdays and Sundays from May through August. Downtown Ald. Mike Verveer supports the idea, calling it “a tremendous assistance to State Street’s recovery.” So does the Downtown business community, which has been hurt by the virus and rioting that scared away customers.

Health-conscious Madison knows it’s safer to interact outside, where the virus doesn’t spread as easily. Plywood boards that protected storefronts from rioters and looters last year have been coming down this spring. The hope is that further unrest over controversial police actions will ease as police leadership and policies change to deescalate tension.

Changing bus routes to stay off of State Street on weekends is complicated. But it already happens periodically for special events. And people who rely on important bus transportation could still catch a bus nearby or at cross streets.

Madison should give it a try. And assuming people like the experience of more room for people, rather than vehicles, the planning for a grand promenade along State Street can proceed. Think of Pearl Street in Boulder, Colorado, or Church Street in Burlington, Vermont.

Give pedestrian mall a try this summer on State Street

Instead of a river of concrete, State Street could be a beautiful green park with winding paths, live music and public art that still respects fire codes, accessibility rules and public transit.

City officials should think big about the future of State Street and our Downtown by approving the “Summers on State” proposal.

Should Madison take buses off of State Street on summer weekends to create more space outside for walkers, shoppers and diners? Send your view, 200 words or less, to wsjopine@madison.com.

Bring our troops home -- State Journal editorial from 30 years ago

Center Stage with Milfred and Hands

They're the "Click and Clack" of Wisconsin politics. Scott Milfred, editorial page editor for the Wisconsin State Journal, and Phil Hands, the…

How to save Madison's struggling Downtown

Nearly half of State Street's 150 storefronts were boarded up in Downtown Madison last week. COVID-19 has ravaged the local economy and cost t…

STATE JOURNAL VIEW: Popular chain will complement more than compete with local businesses in wake of COVID-19 and riots