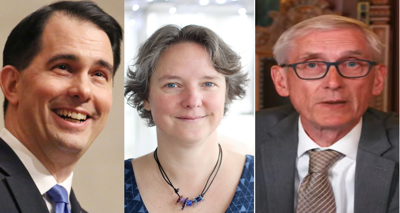 Good riddance to yet another unjustified attempt to remove an elected leader from office before his or her term is over.

The latest bid to boot a politician prematurely from his post ended Tuesday. That’s when organizer Misty Polewczynski of Burlington failed to file any of the 668,327 signatures she needed to force a recall election against Gov. Tony Evers, who is less than halfway through his four-year term.

State law required as many signatures as 25% of the votes cast in the 2018 gubernatorial election. Polewczynski and her supporters wouldn’t say how many they collected.

If Evers had committed a serious crime or blatantly veered the state in the opposite direction he had promised his supporters, maybe an attempt to remove him early would be justified.

But Polewczynski’s gripes included Evers’ mask mandate inside public places, which limits the spread of the deadly coronavirus. She also faulted the governor for destruction in Kenosha after a police officer shot a black man seven times in the back, triggering protests and rioting. Polewczynski is free to disagree with the governor on health policy. She is welcome to criticize Evers for taking too long to call in the National Guard (though he did so the day after Blake was shot and, he says, as soon as local officials requested help).

What she shouldn’t do is try to undermine the will of Wisconsin voters. Recalls should be rare and reserved for only the most egregious behavior.

Many Republicans wisely resisted the bid to recall the Democratic governor. Those who did support it were hypocritical. After all, Republicans had strongly and correctly objected to the attempt to remove GOP Gov. Scott Walker only a year after he was elected. Back in 2011, Democrats claimed Walker deserved an early exit for adopting strict limits on union bargaining. But that was a policy disagreement, not a serious crime, and Walker had been clashing with unions as Milwaukee County executive for years.

If anything, the recall attempt against Walker backfired. He expanded his margin of victory in the 2012 recall election, which helped fuel his 2014 reelection. It wasn’t until Walker sought a third term in 2018 that voters chose Evers.

The recent recall attempt against Madison Mayor Satya Rhodes-Conway failed, too. That’s good. Rhodes-Conway was barely through her first year of running City Hall when the recall organizer faulted her for a $40 wheel tax, which is a policy disagreement. He also faulted Rhodes-Conway for failing to protect Downtown from looting and vandalism, though the mayor condemned the “senseless destruction” and said she relied on law enforcement to decide when to engage with unruly crowds.

The State Journal editorial board didn’t support the recalls of Walker, Evers or Rhodes-Conway. And thankfully, none succeeded. If they had, they would have prompted even more attempts, distracting our leaders from doing the public’s business. Similarly, presidential impeachment should be rare, not a routine political tool employed by the most partisan voices on the left and right.

Voters can hire or fire their top leaders once every four years, including next week for president. Be sure to have your say now, when democracy is in action. Don’t demand a redo if the election results don’t go your way.

The day before Election Day, Reuters ran a story about the personal toll politics has taken on some peoples’ lives.