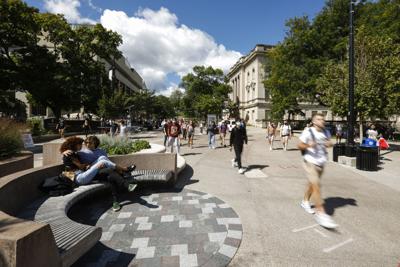 Madison doesn’t need buses on the bottom half of State Street, according to a public transit consultant hired by the city.

That’s exciting news because it creates space for a pedestrian mall in the 400 through 600 blocks.

Jarrett Walker and Associates of Portland, Oregon, just finished a draft plan of new bus routes for Madison. Current routes need to be adjusted to make room for Mayor Satya Rhodes-Conway’s “bus rapid transit” line that will move more people faster to where they need to go.

Not everybody likes all of the proposed changes to local bus routes. North Side aldermen, for example, contend their constituents will lose convenient access.

Tell Metro Transit staff you support taking buses off State Street in Madison to create space for a pedestrian mall. Email your view to: MetroRedesign@cityofmadison.com.

But one detail in the draft plan definitely deserves strong public support: All buses — including local routes — should be removed from lower State Street, as the city’s professional consultant suggests. That would allow for an engaging pedestrian mall extending at least three blocks toward the state Capitol from popular Library Mall on the UW-Madison campus.

Ideally, all of State Street would become a grand promenade and urban park with sidewalk cafes, public art, trees, live music, small business kiosks and more. That’s been a dream in our community for half a century — one the State Journal editorial board will continue to promote.

For now, though, the mayor insists her snazzy and long BRT buses must run up and down the top half of State Street. We don’t agree with that decision, and we hope a future mayor thinks bigger about Downtown’s potential.

But we’re happy the city’s consultant, hired by Rhodes-Conway’s administration, wants to accommodate a bus-free open space on the bottom half of State. This keeps the momentum going for something truly wonderful on State Street that will help bring back and energize crowds and community life as the pandemic finally recedes.

City Hall should start planning now for more events and space for outdoor fun this summer — not just on State Street, but across the city. That will require making the popular “Streatery” program permanent.

City officials wisely created Streatery to help the service industry during the pandemic. The playfully named program allows more table space outside, where the virus has a harder time spreading.

Bars and restaurants across the city have been able to seek special permission for alfresco dining and drinking in parking stalls along the street, in private parking lots and on patios. This has helped lots of eateries and taverns stay alive. Some cafes and bars have even been able to use space in front of neighboring businesses, if those owners agree. That has improved the look and use of vacant storefronts.

Unfortunately, the Streatery program will expire April 14 if city leaders don’t act soon. They absolutely should vote to keep it going, regardless of what happens with the virus. That’s because Madison has learned in a powerful way just how popular eating and drinking outside can be, even when it’s cold. Streetside cafes create an enchanting vibe, inviting visitors and residents alike to walk and explore more of what Madison has to offer.

Under a smart plan proposed by Downtown Ald. Mike Verveer and others, the Streatery program would become permanent next month, though bars and restaurants would have to start paying fees for extra space. That seems fair as the economic harm of COVID-19 subsides. Verveer also wants to balance more space on and near city streets with public safety and noise concerns. The advice of traffic engineers will still apply and make some requests unfeasible.

State Street, of course, is ripe for more outside activity because, by 2023, buses should no longer be traveling down its bottom three blocks, according to the consultant’s plan. As soon as the weather improves this spring, Madison should cordon off lower State Street on weekends and give a longer pedestrian mall a try. Assuming the extra space is popular — and we’re confident it will be — Madison can then pursue remaking at least half of State Street into a permanent mall without vehicles, similar to Pearl Street in Boulder, Colo.

Madison should make this the summer that its most famous street comes roaring back after years of struggle.

Sign up now to get the most recent coronavirus headlines and other important local and national news sent to your email inbox daily.

MARIUPOL, Ukraine — The airport in Ukraine’s second-largest port is shut. A Moscow-led “rebellion” around the city in 2014 made it too dangero…

UW thinks big about pedestrian mall — the city of Madison should, too