© 2019, Lee Agri-Media, a division of Lee Enterprises.
All rights reserved  | Terms of Use  | Privacy Policy
Share This
A veteran journalist who helps support the weekly newspaper in his adopted home county will discuss the current and future landscape of local news in a Zoom talk at 10:30 a.m. ET Tuesday.
Andy Alexander, a former Washington Post ombudsman who spent much of his career as Washington bureau chief for Cox Newspapers, co-chairs the Research and Journalism Committee of Foothills Forum, a nonprofit the funds in-depth, fact-based journalism about issues in Rappahannock County, Virginia, where Alexander lives. To get access to the talk, email Kathryn@rappathome.org.
His Zoom talk is part of the Rapp at Home series of The Rappahannock News, the weekly supported by the nonprofit. The newspaper notes, "Local newspapers have been disappearing at an alarming rate, with roughly 2,100 vanishing during the past 15 years. Most were weeklies. Over the past two months, more than 35,000 news employees have been laid off, furloughed or had their pay reduced. Covid-19 guarantees that this number will grow, with disturbing consequences for democracy and for the preservation of an informed citizenry. Studies show that when local news outlets disappear, civic engagement suffers while voter participation declines. Fewer people run for office. Political polarization grows. 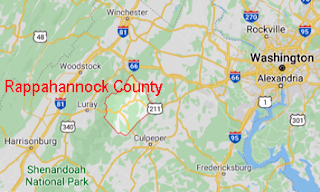 "The Rappahannock News has not been spared. It faces significant economic challenges. But it has been able to maintain — and expand — its news coverage through a unique partnership with Foothills Forum, . The partnership between Foothills Forum and the Rappahannock News is now seen as a model that can be replicated in other communities where local journalism is in danger of disappearing." (Google map, adapted)