JEFFERSON CITY, Mo. — As technology has advanced, jobs in agriculture have changed. Work on the farm and at agribusinesses has shifted, reflec…

When pandemic-related shutdowns began in March 2020, there were concerns about how it would affect the new work force.

DECATUR, Ill. — In addition to looking at the newest grain carts, planting attachments, grain bins and tractors, those attending the Farm Prog…

Ag companies get into data business

Zeroes and ones are nearly as important to modern agriculture as seeds and acres. Keeping those digits private is a never-ending battle.

Agricultural technology has come a long way since farmers used oxen and horse-drawn plows to break the prairie sod. Huge advancements are bein…

VALLEY, Nebraska — While Brian Smith and his fellow meteorologists have access to all sorts of gadgets to help predict storms, they still rely…

To foster love for farming, leave room to choose

Farm show season has begun. Agricultural shows and fairs are up and running again, including one of the largest: the Farm Progress Show which …

Digital divide narrows; fewer than 1/3 of rural adults in poll said government should get all connected in pandemic 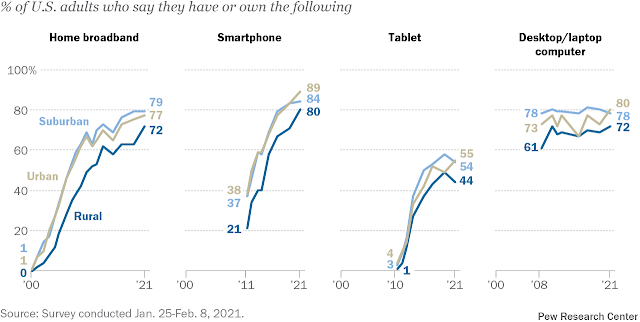 Emily Vogels of the Pew Research Center, citing its latest polling on the topic.

They are also less likely to have internet-connected devices, and less likely to have multiple devices, Vogels reports: "Three in 10 adults who live in rural communities report owning or having a desktop or laptop computer, a smartphone, a home broadband connection and a tablet computer, compared with 44% of urban and 43% of suburban adults."

Also, "Rural residents go online less frequently than their urban counterparts. Eight in 10 adults who live in rural communities say they use the internet on at least a daily basis, compared with roughly nine in 10 of those in urban areas (88%)."

While much of the talk about the digital divide has focused on what federal and state governments can do about it, "Only 29% of rural adults say the government has a responsibility to ensure that all Americans have a high-speed internet connection at home during the coronavirus outbreak," Vogels reports. "In comparison, 50% of urban residents and 35% of suburbanites say the same, according to previously unexplored data from an

Along with planting, spraying and harvesting, storage of grain is a farm task undergoing modernization.

Registration is now open with early bird savings available for Poultry Tech Summit, scheduled for Oct. 31-Nov. 2, at the Georgia Tech Hotel & Conference Center in Atlanta, Georgia. The 2021 event will be held in person with an on-demand offering for professionals unable to travel.

State Fair celebrates coming back together

There are several new ag tech products for machinery being introduced this summer.

Flying high: Applicators fill the skies this time of year

Editor’s note: This is the start of a series on the ins and outs of ag-related businesses.

Some rural towns are getting a boost from remote work by staffers of big-city employers, Rebecca Beitsch reports for The Hill, a newspaper tha…

Recent advancements in technology have made their way into precision agriculture, with emphasis placed on using new technologies to increase crop yields and profitability, while simultaneously lowering levels of inputs needed like water, fertilizer and herbicides. Although widely used in row-crop production, precision agriculture is only just beginning to move into the ranching world.

Earlier detection of tar spot could save cornstalks